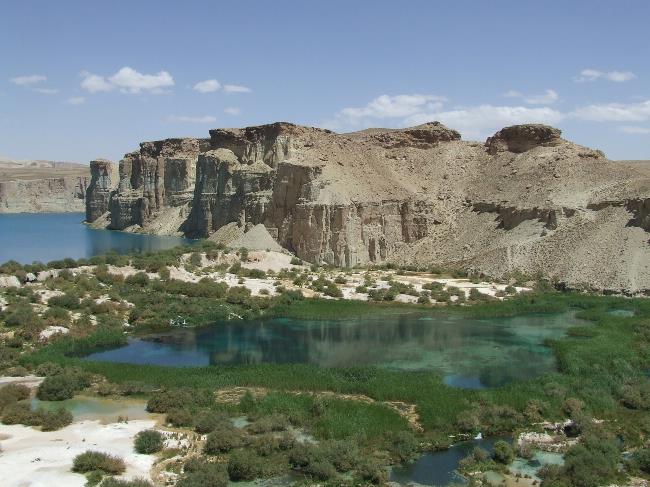 Afghanistan has spent the last 3 decades in the news for all the wrong reasons While visiting has not been advisable for several years, it has much to offer the intrepid traveler That said, even the more adventurous should consider looking elsewhere for thrill-seeking at the moment

Temperatures in the north can be below freezing for most of the winter, and snow in the higher elevations is common Summertime highs in lower elevations such as Kandahar can exceed 50C/120F In higher areas such as Kabul, summer temperatures can be 30C/90F and winter around 0C/30F The most pleasant weather in Kabul is during April, May and September

Mostly rugged mountains; plains in north and southwest The Hindu Kush mountains run northeast to southwest, dividing the northern provinces from the rest of the country, with the highest peaks found in the northern Wakhan Corridor South of Kandahar is desert

The lowest point is Amu Darya at 258 meters, and the highest is Nowshak at 7,485 meters

The Largest ethnic groups are the Pashtuns, Tajiks/Persians, Hazaras, and Uzbeks

Baloch tribesmen, still largely nomadic, can be found anywhere between Quetta in Pakistan and Mashad in Iran, including much of Western Afghanistan They make marvellous rugs, if somewhat simple

There are about 30,000 to 150,000 Hindus and Sikhs living in different cities but mostly in Jalalabad, Kabul, and Kandahar who belong to the Punjabi, Sindhi, Kabuli, and Kandhari ethnic groups

Hazaras in the Central mountains look much more Asiatic than other Afghans According to some theories, they are descended from Ghengis Khan's soldiers

The two largest linguistic groups speak Pashto and Dari Afghan Persian Pashto speakers predominate in the South and East, Dari in North, west and central Afghanistan About 11% of the population have Turkic languages, Uzbek or Turkmen, as their first language Many of them are in the North, near Uzbekistan and Turkmenistan

Afghanistan was created as a nation in 1747 by Ahmad Shah Durrani, with its capital at Kandahar The country has a long history of warfare, mostly against invaders such as Alexander of Macedon, Arabs, Turks, Mongols, Persians, and the British Its recent history is no exception

The Soviet Union invaded in 1979, to support a local socialist government They were forced to withdraw 10 years later by anti-Communist mujahideen rebels, who were supplied and trained by the US, Saudi Arabia, Pakistan, Iran and others Fighting subsequently continued among the various mujahideen factions, giving rise to a state of warlords

The Taliban grew out of this chaos, providing a solution to what was by this time a civil war Backed by foreign sponsors, and inspired by a conservative sect of Islam, Taliban developed as a political force to end the civil war and bring security to the country They eventually seized power and controlled most of the country, aside from some areas in the northeast

After the September 11, 2001 terrorist attacks in the US, the Taliban refused to hand-over Osama bin Laden and Al Qaida militants The US and allies decided to take military action with support from anti-Taliban Afghans and Pakistan's government, causing the Taliban's government to fall in December 2001

That same month, representatives from all ethnic groups of Afghanistan met in Germany and agreed to form a new democratic government with Hamid Karzai as Chairman of the Afghan Interim Authority Following a nationwide election in 2004, Hamid Karzai was elected as President of the Islamic Republic of Afghanistan A year later, in 2005, legislative elections were held and the country's parliament began functioning again In addition to occasionally violent political jockeying and ongoing military action to root out anti-government elements, the country suffers from poverty, corruption, and widespread opium cultivation

In 2005, the United States and Afghanistan signed a strategic partnership agreement committing both nations to a long-term relationship In the meantime approximately 30 billion US dollars are being spent on the reconstruction of the nation, most of this funding came from America with some from European and Asian countries such as Britain, Germany, Japan, India, Saudi Arabia, Pakistan, Iran and others

There are three types of electrical outlets likely to be found in Afghanistan They are the old British standard BS-546, the newer British standard BS-1363 and the European standard CEE-7/7 "Schukostecker" or "Schuko" There is no single recognized standard Hence, you may encounter any or all of these outlet types there Generally speaking, US and Canadian travelers should pack adapters for these outlets if they plan to use North American electrical equipment in Afghanistan You may also find cheap universal adapters in the local markets

Dari, an Afghan dialect of Persian, is the native language of about half the population Pashto is the native language for about 35%, mainly in the South and East; it is also spoken in Pakistan About 11% have a Turkic native language, primarily Uzbek and Turkmen, and there are also 30 minor languages such as Balochi Most people speak more than one language; Dari is the historical lingua franca, widely spoken as a second language You'll find a few people in Kabul who speak a little English but otherwise it isn't widely understood

As to English it is now at the climax of its flourishing in Afghanistan & the percentage of those who speak English now has reached unprecedented rates Mr, Karazai & his cabinet are fluent in English English was taught at past from the seventh grade, but now is taught from the fourth grade Signs in English in the streets now common all over the country English is the second foreign language in Afghanistan

What to see in Afghanistan

Afghanistan has several sites on the UNESCO World Heritage List, including:

Afghani AFN is, perhaps non-surprisingly, the currency of Afghanistan As of December, 2009, US$ 1 equals about 4850 Afghanis, while â¬ 1 trades about 70 Afghanis

Haggling is very much part of the tradition

Afghanistan's most famous products are carpets There are carpets described as "Afghan", but also at least two other carpet-weaving traditions The Baluchi tribes in the South and West weave fine rugs, and the Turkoman tribes in the North do as well; both groups are also found in neighbouring countries All three types tend to use geometric patterns in the design, usually with red as the background colour and with repeated elements called "guls" to make the pattern Generally, these are not as finely woven as carpets from the cities of neighboring Iran However, many of them are quite beautiful and their prices are assuming good haggling well below those of the top Iranian carpets

"Golden Afghan" rugs were fairly common in Western countries a few decades back; they were invented by Western dealers who bleached Afghan carpets to eliminate the red colour, leaving a blue or black on orange or gold design They are rare in Afghanistan, where the traditional colours are preferred In the West, collectors also prefer the traditional colours and bleached rugs generally bring a lower price Also, the "golden" rugs may not wear as well as unbleached rugs since bleaching can damage the fibers In most cases, they should be avoided

It is fairly common for rugs woven by nomads — such as many Baluchi rugs and some Turkoman — to show minor irregularities The loom is dismantled for transport and re-assembled at the new camp, so the rug may not turn out perfectly rectangular Vegetable dyes are often used, and these may vary from batch to batch, so some colour variation arbrash occurs and this may be accentuated as the rug fades To collectors, most such irregularities come in the "that's not a bug; it's a feature" category; they are expected and accepted In fact, a nice arbrash can considerably increase the value of a rug

Turkoman designs are widely copied; it is common to see "Bokhara" carpets from India or Pakistan, China produces some, and the Afghan carpet designs show heavy Turkoman influence To collectors, though, the original Turkoman rugs are worth a good deal more Good Baluchi rugs are also quite valuable in Western countries Afghan rugs, or lower grade Baluchi and Turkoman rugs, generally are not collectors' items; most travellers will find the best buys among these Experts might pay premium prices for the top-grade rugs, but amateurs trying that are very likely to get severely overcharged

Kelims are flat-woven fabric with no pile These are nowhere near as tough as carpets and will not survive decades on the floor as a good carpet will However, some are lovely, and they are generally cheaper than carpets Things like purses made of carpet or decorated with kelim weave are also common

Another common product and popular souvenir is the Afghan sheepskin coat These have the wool on the inside for warmth and the leather on the outside to block wind, rain and snow They often have lovely embroidery Two cautions, though One is that the makers use the embroidery to hide flaws in the leather; top-quality coats will have little or no embroidery The other is that Australian customs have been known to incinerate these coats on arrival, to protect their large sheep population from diseases notably anthrax that poorly tanned Afghan products might carry

There are also various bits of metalwork — heavily decorated pots, vases and platters, and some quite nice knives

These make a rather problematic souvenir Importing a firearm anywhere can be difficult and it may be impossible in some places If you are travelling overland and passing through several countries before you reach home, it is almost certainly not worth the trouble Also, if you actually fire any Afghan gun, there is a risk that it will blow up in the face of the shooter

Hotels and guesthouses are available in all major cities, and while some may not meet international standards they are usually friendly and reliable

Many foreigners are finding well paid work in Afghanistan as part of the reconstruction efforts Often with the UN or other non-governmental organisations Most of these jobs are within Kabul Local wages are very low, especially outside of Kabul However, everyone should read and understand the travel advice published by their respective governments or in the Stay safe section below You will need a work visa if you are planning on working on a US military base

What do you think about Afghanistan?

How expensive is Afghanistan?