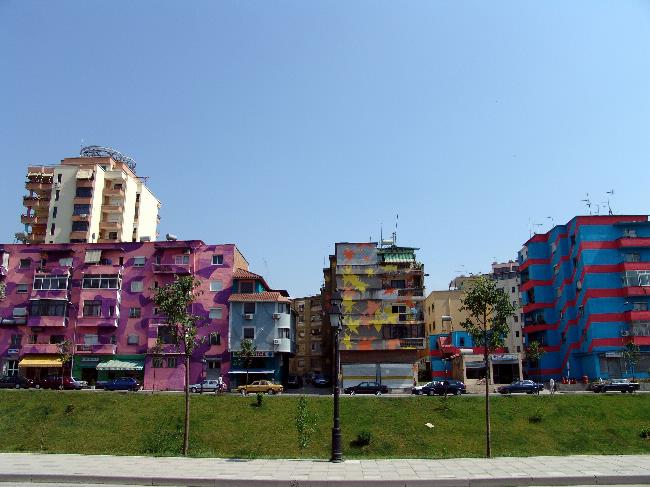 While the relative majority of the people in Albania are of Muslim heritage 75-80%, according to the polls, around 35% of the Albanians are agnostics; 22% are atheists; 19% are Muslim; 15% are orthodox; 8% are Catholics and 1% are of other religions Mixed marriages are very common and in some places, even the rule

Traditional Albanian culture honors the role and person of the guest In return for this place of honor, respect is expected from the guest Albanians enjoy the long walks the city streets, drinking coffee, and among the younger generations, partaking in nightlife activities such as cafe lounging and dancing

Albania is a poor country by European standards

Following the defeat of the Axis powers at the end of World War II, a totalitarian Communist government was established, presided over by resistance leader Enver Hoxha Albania became infamous for its isolation, not just from the market-run democracies of Western Europe, but from the Soviet Union, China, and even neighboring Yugoslavia Even as the Iron Curtain came down and Communists lost power throughout Eastern Europe, Albania seemed intent on staying the course, alone

But in 1992, several years after the death of Hoxha, the Communist party finally relinquished power and Albania established a multi-party democracy with a coalition government The transition has proven difficult, as corrupt governments have tried to deal with high unemployment, a dilapidated infrastructure, widespread gangsterism, and disruptive political opponents Today Albania is making progress, with EU integration as its goal; Albania signed the SAA on June 2006, thus completing the first major step towards joining In 2008 Albania received an invitation to join NATO

With its coastline facing the Adriatic and Ionian seas, its highlands backed upon the elevated Balkan landmass, and the entire country lying at a latitude subject to a variety of weather patterns during the winter and summer seasons, Albania has a high number of climatic regions for so small an area The coastal lowlands have typically Mediterranean weather; the highlands have a Mediterranean continental climate In both the lowlands and the interior, the weather varies markedly from north to south

Inland temperatures are affected more by differences in elevation than by latitude or any other factor Low winter temperatures in the mountains are caused by the continental air mass that dominates the weather in Eastern Europe and the Balkans Northerly and northeasterly winds blow much of the time Average summer temperatures are lower than in the coastal areas and much lower at higher elevations, but daily fluctuations are greater Daytime maximum temperatures in the interior basins and river valleys are very high, but the nights are almost always cool

Average precipitation is heavy, a result of the convergence of the prevailing airflow from the Mediterranean Sea and the continental air mass Because they usually meet at the point where the terrain rises, the heaviest rain falls in the central uplands Vertical currents initiated when the Mediterranean air is uplifted also cause frequent thunderstorms Many of these storms are accompanied by high local winds and torrential downpours

Albanian is the official language Other useful languages include Italian, which is often viewed as the de facto second language due to various Italian occupations, the most famous being during World War II English is understandable in Tirana and to a lesser extent in frequented tourist cities In the southernmost areas of the country, you might also encounter minority speakers of the Greek language Note that for a country of 3 million, there are about 12 million immigrants, and many of them have returned to Albania from countries such as Germany, France, Greece especially those in the south of Albania and Italy so you'll find a lot of people who speak the respective languages Macedonian is also occasionally understood in areas near Pogradec and Korca

What to see in Albania

There are many things to do in Albania Because of its size, traveling around it is not difficult, allowing tourists to see many beautiful parts of the country

Notice that some Albanians write prices with an extra zero They are not trying to charge you 10 times the going rate; they are merely using the old currency

Many rural convenience stores will not accept any other method of payment other than cash currently in Albanian lek However supermarkets, the better bookstores and the better boutique stores will accept Credit or Debit Cards The most widely accepted cards are VISA, Mastercard, and Diner's Club

Food and eating in Albania

Restaurants are very easy to find Albania, like the Balkans in general, has a primarily Turkish influence in its cuisine This influence stems from over 400 years of Ottoman rule in the region Recent influences after the fall of communism in the early 1990's have been from Italy and Western Europe in general Most of what is available in neighboring countries such as Greece and Italy will be available in Albania, particularly in the larger cities

Many people grow fruits and vegetables around their houses, most popularly all kinds of grapes, red, black, green, that are used to make raki

Albania is a very mountainous country, and these mountains have scattered olive trees that influence Albanian cuisine Salads are usually made with fresh tomato and onion Most Albanian people make their own bread, and going out for meals is not common

Some sort of hearty stew is commonly included in Albanian dinners These stews are easy to make, and flexible with ingredients They include potatoes, onion, rice, etc

The preferred alcoholic hard drink is raki that is locally produced in small towns as well as in many homes in the countryside; in some instances you may run across men washing down breakfast with a few shots Try the mulberry rakia - Albanians are the only people in the world that produce this drink with mulberry and plum, and its very delicious, especially around Gjirokastra Albanian veins - Cobo especially - is also good The number of homemade beers, wines and raki is as varied as the population itself; the quality of these drinks is as varied as the quantity available Non-alcoholic drinks range from the well-known international and regional soft drink brands to the locally produced ones You can find any type of pop or soft drink in Albania, as well as natural mineral water, energy drinks, etc Qafshtama and Tepelana water are especially good, and used in most of the country Sport beverages are usually Greek products and have a lot of sugar, so its the best if you avoid them A very good drink is Lemon Soda, a fizzy drink similar to Sprite, but also has lemon

Boza 6, a popular sweet drink made from maize corn and wheat is a traditional Albanian drink, and Albanians have been known as the best boza makers in the world

Inside the cities, hotels are abundant and prices per night start as low as â¬15 Hotels are usually clean and their staff generally speak English and/or Italian

Outside the big cities, hotels are less common, but in places like Gjirokastra can be excellent value eg: 1000 lek If, for any reason, you find nowhere to sleep, the Albanian people have always been known for their hospitality, and will treat you like royalty as you stay with them

What do you think about Albania?

How expensive is Albania?
(1 EUR = 0 USD)
TripAround.org, your travel companion