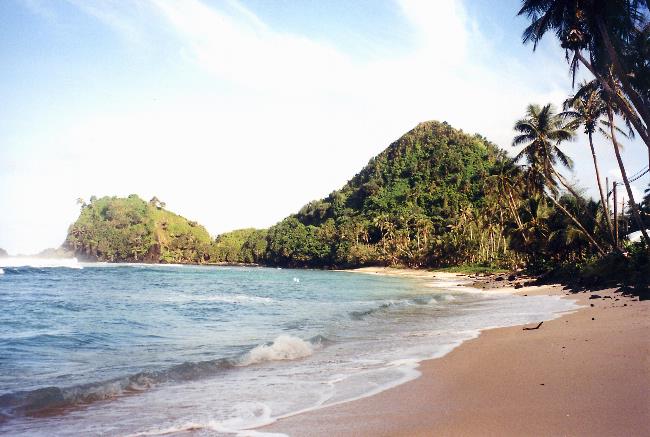 The islands are frequently referred to as Samoa, which is the name of a separate island, and independent country, that used to be known as Western Samoa, that lies about 100km west of American Samoa Also the whole island group, including Samoa, are often identified as the Samoan islands

Settled as early as 1000 BCE by Polynesian navigators, Samoa was reached by European explorers in the 18th century International rivalries in the latter half of the 19th century were settled by an 1899 treaty in which Germany later Britian and the US divided the Samoan archipelago The US formally occupied its portion - a smaller group of eastern islands with the excellent harbor of Pago Pago - the following year

American Samoa is warm, humid and rainy year-round, but there is a long, wet summer season October - May and a slightly cooler and drier season June - September Total annual rainfall is 125 inches at the Tafuna airport and 200+ inches in mountainous areas Such rainfall gave the English writer Somerset Maugham the name for his short story "Rain", based in Pago Pago, which was subsequently turned into a play and movie

The native language is Samoan, a Polynesian language related to Hawaiian and other Pacific island languages English is widely spoken, and most people can at least understand it Most people are bilingual to some degree

What to see in American Samoa

What to do in American Samoa

Fatamafuti or flower pot, located about 300 yards out in the ocean stands a tall mini island Home to many exotic birds

Food and eating in American Samoa

Tutuila has a wide variety of places to eat--from familiar fast food stops to fine restaurants The outer islands have far less variety Restaurants offer a variety of cuisines, including American, Chinese, Japanese, Italian and Polynesian

There is hotel-style lodging on all islands except Olosega

The tuna industry is very prominent, but about 30% of the population is unemployed

What do you think about American Samoa?