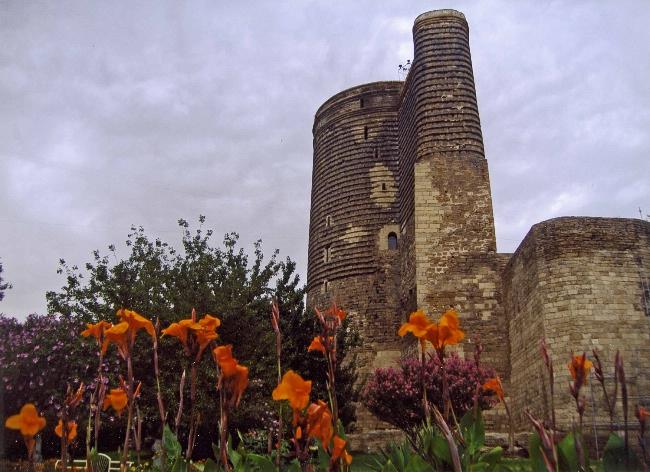 The Nagorno-Karabakh enclave, which is part of Azerbaijan, was the subject of a war with Armenia that has left it a de facto independent republic, which is not internationally recognized, ironically including Armenia which "supports" it Azerbaijan has lost 13% of its territory and must support some 800,000 refugees and internally displaced persons as a result of the conflict Despite a 1994 cease-fire, Azerbaijan has yet to resolve its conflict with Armenia over the Azerbaijani Nagorno-Karabakh enclave Occupied by the local Armenian troops to this day, this conflict has not officially ended with minor skirmishes frequent, and is a major source of contention among Azerbaijanis

The majority of the population over 90% is composed of Azeris, who share a culture very similar to Turkey History, with Russian and Persian influence, has left the Azeris of Azerbaijan and Iran with some moderate differences Minorities in Azerbaijan include Lezghins, Russians, Avars, Turks, Tatars, Ukrainians, & Georgians Most inhabitants are Shia Muslim, although a long history of European and Russian colonialism has left many with very liberal, laisez-faire attitudes towards Islam and the country is staunchly secular The government is a kleptocracy of the benevolent Aliyev family and their allies although, while opposition is often sacked or imprisoned, it is not as severe an authoritarian government as you'll find in Turkmenistan, Iran or the Russian Caucasus Following independence in 1991, Azerbaijan has allowed western companies to develop its neglected, but extensive, oil fields and has seen oil production skyrocket especially since the mid-2000s Despite this and related investments, most of the new-found wealth remains in the hands of a small number of people and the city of Baku While Baku is full of new construction and a growing middle class, much of the country remains poor, rural agrarians and merchants Corruption is ubiquitous compared with neighboring Georgia and Armenia

These are the nationally recognized holidays for people living in Azerbaijan

Azerbaijan is known for having nine of the 11 existing ecological zones Much of the country is temperate year-round Nation-wide the average temperature for the year is 14-15C The Caucasus Mountains protect the country from the Arctic air masses that affect Russia in winter while the Caspian Sea shields it from the hot, dry air of Central Asia in the summer Temperatures in the winter are mild 0-15C at lower altitudes and along the coast and drops moderately as you head inland and drastically as you head into the mountains -20C is possible in the Caucasus Mountains Summers range from warm to hot20-40C throughout most of the country, although breezes off the Caspian make life pleasant along the coast Nakhchivan is quite different, high and arid, summers here can easily surpass 40C while winter nights often drop below -20Cin fact the country's extreme minimum and maximum -33C & 46C were both recorded in southern Nakhchivan!

Snow is rare in Baku and along the coast in general while common inland and copious in the mountains, where many villages may be cut off during the winter The southern forests are the wettest part of the country, with plenty of rain in late autumn and early spring The western central coast is fairly dry Lankaran receives the most annual precipitation 1600-1800mm while the region around Baku averages 600mm Baku is very breezy, much like Chicago or Wellington, most of the year

Elevation extremes
lowest point
Caspian Sea -27 m
highest point
Bazarduzu Dagi 4,466 m
Environment - current issues
Local scientists consider the Abseron Yasaqligi Apsheron Peninsula including Baku and Sumqayit and the Caspian Sea to be the ecologically most devastated area in the world because of severe air, soil, and water pollution; soil pollution results from oil spills, from the use of DDT as a pesticide, and from toxic defoliants used in the production of cotton

Electricity is supplied at 220V 50Hz Outlets are the European standard CEE-7/7 "Schukostecker" or "Schuko" or the compatible, but non-grounded, CEE-7/16 "Europlug" types Generally speaking, US and Canadian travelers should pack an adapter for these outlets if they plan to use North American electrical equipment in Azerbaijan

Additionally, some older buildings may be still equipped with Soviet-era outlets The Soviet GOST-7396 standard was very similar to the current European CEE-7/7 "Schuko plug", but the pins were of a 40 mm diameter, while the Schuko features 48 mm pins As such, the pins of a Schuko may be too large to fit into a Soviet-era outlet, although the smaller Europlug will still fit Although the Soviet-era outlets have largely been phased out, travelers who are particularly concerned with having the ability to plug in at all times may consider packing an adapter for the Soviet-era outlets too, just in case

Also, make sure to bring your own automated voltage adapter because the electricity in Azerbaijan short circuits and "jumps" a lot and many items may get shocked if you don't bring the adapter

Azeri is the official language This is a Turkic language, closely related to Turkish itself However, English is spoken in some places frequented by Westerners Most people speak Russian which is now declining and slowly being replaced by English, especially in the capital city, Baku

What to do in Azerbaijan

Economy - overview: Azerbaijan's number one export is oil Azerbaijan's oil production declined through 1997 but has registered an increase every year since Negotiation of production-sharing arrangements PSAs with foreign firms, which have thus far committed $60 billion to oilfield development, should generate the funds needed to spur future industrial development Oil production under the first of these PSAs, with the Azerbaijan International Operating Company, began in November 1997 Azerbaijan shares all the formidable problems of the former Soviet republics in making the transition from a command to a market economy, but its considerable energy resources brighten its long-term prospects Baku has only recently begun making progress on economic reform, and old economic ties and structures are slowly being replaced An obstacle to economic progress, including stepped up foreign investment in the non-energy sector, is the continuing conflict with Armenia over the Nagorno-Karabakh region Trade with Russia and the other former Soviet republics is declining in importance while trade is building with Turkey and the nations of Europe Long-term prospects will depend on world oil prices, the location of new pipelines in the region and Azerbaijan's ability to manage its oil wealth

Food and eating in Azerbaijan

Cabbage, grape leaves, and eggplant wrapped meat kelem, yarpaq, badimjan - dolmasi, kabab kebab, rice with chicken and other stuff plov - It is said that plov is the king of Azerbaijani cuisine, gutabs and meatballs kufta are some of the specialties of Azerbaijan

Bread is a staple, and is quite revered by the people of Azerbaijan Insulting or refusing to eat bread with a meal if uninterested, at least a small corner is nearly equivalent to insulting the Koran

Georgian food, in particular kajpuri a cheese-filled bread, along with some Russian staples borsh have become throughout Azerbaijan Other cuisines such as Turkish, Western & fast food, along with Asian food can be found in Baku

Some local drinks include ayran a yogurt drink based on sour milk and sherbet made from rose petals or saffron There are also different sorts of quite decent wines produced from local grapes and a wide array of mineral waters from natural springs In some areas of Azerbaijan the markets offer lemonades limonat/dushes made from pears, antibiotics and green tea

What do you think about Azerbaijan?

How expensive is Azerbaijan?
(1 AZN = 0 USD)
TripAround.org, your travel companion