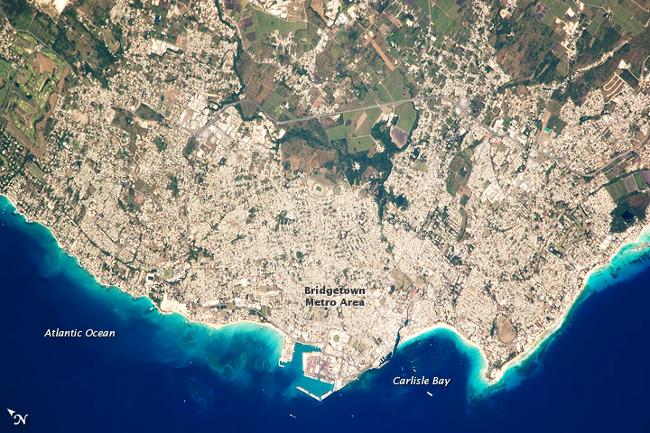 Barbados has experienced several waves of human habitation The first wave were of the Saladoid-Barrancoid group, farmers, fishermen, and ceramists who arrived by canoe from Venezuela's Orinoco Valley around 350 AD The Arawak people were the second wave, arriving from South America around 800 AD Arawak settlements on the island include Stroud Point, Chandler Bay, Saint Luke's Gully, and Mapp's Cave According to accounts by descendants of the aboriginal Arawak tribes on other local islands, the original name for Barbados was Ichirouganaim In the 13th century, the Caribs arrived from South America in the third wave, displacing both the Arawak and the Salodoid-Barrancoid For the next few centuries, they lived in isolation on the island

The name "Barbados" comes from a Portuguese explorer named Pedro Campos in 1536, who originally called the island Los Barbados "The Bearded Ones", after the appearance of the island's fig trees, whose long hanging aerial roots resembled beards Between Campos' sighting in 1536 and 1550, Spanish conquistadors seized many Caribs on Barbados and used them as slave labor on plantations The others fled the island, moving elsewhere

Barbados was formally settled by the British in 1627 After several failed crops of cotton, sugarcane was introduced, and the colony established itself as a profitable plantation economy Enslaved Africans were the primary source of labour on these plantations until 1834, when they won their freedom through several years of rebellion, supported by increasing pressure from anti-slavery movements in Britain

The economy remained heavily dependent on sugar, rum, and molasses production through most of the 20th century Though the shackles were removed, much of the repressive labour conditions of slavery remained on the island, until the 1930s, when the educated black middle class fought for universal adult suffrage and took the control of the country's local governance away from the British-descended local aristocracy The country began a process of social and political reforms in the 1940s and 1950s which led to complete independence from the UK in 1966 In the 1980s, tourism and manufacturing surpassed the sugar industry in economic importance Barbados has developed into a stable democracy with one of the highest rates of literacy in the Western Hemisphere

Locals refer to themselves as Bajans and things Barbadian as Bajan

The official language in Barbados is English Bajan occasionally called Barbadian Creole or Barbadian Dialect, is an English-based creole language spoken by locals Bajan uses a mixture of West African idioms and expressions along with British English to produce a unique Barbadian/West Indian vocabulary and speech pattern There are a few African words interspersed with the dialect Communication will not be a problem for any English speaker as Barbados has one of the highest literacy rates in the Western Hemisphere of around 999 percent

What to see in Barbados

The local currency is the Bajan dollar, but US dollars are accepted just about everywhere in shops and restaurants The exchange rate is fixed at 198 Bajan dollars to the US Dollar but almost everyone uses US$1 = BD$2 Keep in mind that exchangers in hotels may insist on taking an additional percentage of the exchange typically 5%

Many "duty free" shops cater to visitors, eg, from cruise ships Bridgetown's main street hosts numerous jewelers, most frequently Colombian Emeralds and Diamonds International Cave Shepherd department store offers a wide range of mercantile, while Harrison's offers premium gifts, leathers and cosmetics Other smaller stores offer virtually everything a visitor or resident might need A small mall at the harbor also offers decent prices and selection eg, for rum and UK liquors, though goods produced in Barbados may be slightly more expensive there than elsewhere on the island

Barbados has a well-deserved reputation for producing excellent rum, eg, Mount Gay Rum distilleries are usually open for tours, and typically offer samples and product for sale at prices often equal to the best found anywhere else See also "Drink" below

The fine Arts flourish in Barbados and many galleries and studios have shows on all year round which change every few weeks Details of monthly arts happenings may be viewed on 2, which creates a page showing events, workshops and opening receptions

Duty Free: Stores selling to visitors can honestly claim they offer duty free pricing They do in-fact pay duty on imported goods before offering them them for sale But as they sell anything to you as a visitor, they will ask you to sign a form that allows them to get a refund of the duty paid The government is reportedly advancing toward allowing vendors to simply obtain goods intended for visitors without paying duty

Food and eating in Barbados

Individual listings can be found in the Barbados#Districts articles

Weekend shut down! Everything shuts down on the weekend so plan ahead especially if you are self-catering Most stores are open till noon on Saturday and then nothing opens till Monday morning** **while the weekend shutdown thing used to be true, it isn't any longer Clothing and gift stores maybe open until at least 4pm with Sheraton Mall Shops open until at least 9:00pm on a Saturday and Supermarkets island wide are now open on both Saturday and Sundays for your shopping pleasure

A Bank Holiday such as Christmas, New Years Day, Good Friday, Easter Sunday and Easter Monday will find most if not all store and banks and business houses closed, but stores attached to gas stations will have limited availability of basic items There are a few small family run groceries across the island that will open on Bank Holidays or have a side door open to serve their community

Rum and rum drinks are featured at every bar Perhaps the most famous domestic brand offered is Mount Gay Rum, which is very delicious Modest cost tours of the distillery 4 are available on weekdays They offer samples of all their rumsalso sold at attractive prices

There's a broad range of hotels in the country, from economy hotels costing $1 per night sometimes filthy and sometimes reluctant to take foreigners up to 5-star hotels in some of the major cities, including chains like Radisson Dhaka 43, Sheraton Dhaka 44 ,Westin Dhaka 45Another comfortable place is Lakeshore Hotels and Apartments46

What do you think about Barbados?

How expensive is Barbados?
(1 BBD = 0 USD)
TripAround.org, your travel companion