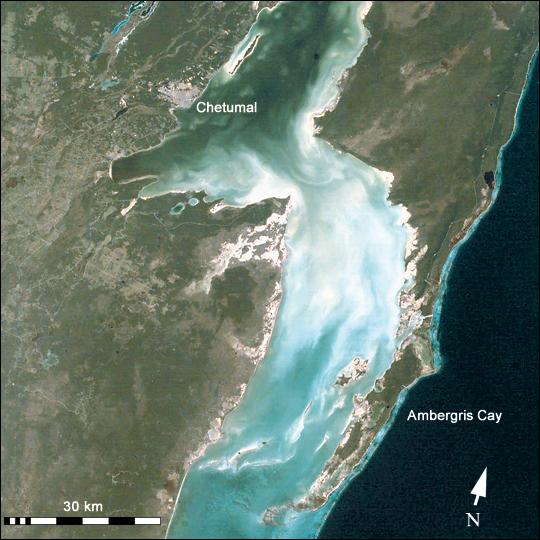 With a long Caribbean coast, Belize is culturally similar to many of Britain's former West Indian island colonies, with a majority creole or Afro-Caribbean population Inland are the native Maya people, and especially in the north and northwest of the country Spanish is often spoken Many refugees from the Caste War of Yucatan settled here In the south east along the Caribbean coast live the Garifuna Black Caribs an Afro-Amerindian culture German speaking Mennonites also call Belize home

World class attractions include exploring the lush jungles with exotic plants and animals, deep sea fishing, swimming, snorkeling and diving in the Caribbean sea with its attractive reefs, and visiting the Mayan ruins Belize escaped the bloody civil conflicts of the 80's that engulfed Central America and while it has not been immune to the rampant drug crime and grinding poverty of its neighbors it is a rather safe destination for the most part located in a part of the world that is not always considered safe Income levels are still very low and the infrastructure is very basic The Belizians are very proud and friendly to visitors and the tourist industry grew greatly in the last decade

Territorial disputes between the UK and Guatemala delayed the independence of Belize formerly British Honduras until 1981 Guatemala refused to recognize the new nation until 1991 Tourism has become the mainstay of the economy as the old agricultural products -- sugar, banana, and oranges -- have lost ground The country remains plagued by high unemployment, growing involvement in the South American drug trade, and increased urban crime In 2006 commercial quantity oil was discovered in the Spanish Lookout area

As a former British colony the official language of Belize is English, which makes it stand out from its Spanish speaking neighbors Spanish, Maya, Garifuna Carib, and Belizean Creole are widely spoken in various parts of the country Many Belizeans speak a mix of Creole and English among friends, and full English to foreigners The strong Caribbean accent may get some getting used too

What to do in Belize

Also world-class is the snorkeling and scuba diving There are many exceptional dive sites to be found in Belize and chartering a sailboat or catamaran is an ideal way to make the most of your available dive time Very few offer all-inclusive options, but one that does is Legacy Adventure Catamaran Charters 501-670-4354 or 501-622-4354 go@legacychartercom http://wwwlegacychartercom/ offering all-inclusive charters comfortably accommodating up to 12 guests aboard a custom 65 foot sailing catamaran

The Belize dollar BZD, usually symbolized with a "$" is officially worth exactly 1/2 of a US dollar Because of this simple and consistent exchange rate, US dollars are widely accepted, but this means you should be careful to clarify which "dollars" you're talking about when negotiating prices It's often better to assume Belize dollars because many merchants will jump on your uncertainty and attempt to double their price by saying "No, in US Dollars" Belize dollars come in denominations of $2, $5, $10, $20, $50, and $100; $1 and smaller amounts are coins The 25-cent coin is often called a "shilling"

Food and eating in Belize

Citrus plantations are numerous, so fresh oranges and grapefruits are abundant Pineapples, papayas, bananas and plantains are also grown and sold in roadside markets

A famous hot sauce in Belize is Marie Sharp's made from the very potent local habanero pepper It comes in a variety of flavors mild, hot, extremely hot

Belikin is the national beer and comes in four varieties: Belikin Premium, Belikin Beer, Belikin Stout, and Lighthouse Lager Guinness Stout is also available in Belize but it is brewed by the Belikin Brewing Co All are sold in returnable bottles, so make sure you are aware of the deposit if you are taking your beverages to go

One Barrel Rum is the locally-distilled molasses-tasting rum Travelers Rum has a distillary on the Northern Highway about 6 miles from Belize City with a gift shop and hospitality bar You can purchase rum in a variety of colors and sizes, up to a 70 gallon cask

Both are widely available around the country But if you also like wine there is cashew wine which is very popular in Belize, ginger wine, sorrel wine and blackberry wine

Couchsurfing 34 has a lot of members in Belgium

Vrienden op de fiets 35 If you are travelling in Flanders by bicycle or by foot, there is a list of 220 addresses where you can stay at private homes with bed and breakfast for no more than â¬17 per person per night, although you must also pay â¬9 for membership of this scheme

Belgium has many fine hotels Capital Brussels has countless rather expensive business hotels catering to the European Union's bureaucrats, and while you can usually get a good room for under €100, prices can spike if there's a big EU shindig in town

Having one of the highest labour taxes in Europe, Belgium is struggling to reposition itself as a high-tech country In that struggle, Flanders is far ahead and much wealthier than Wallonia, in contrast to the previous decades, where Wallonia's steel industry was the main export of Belgium Highly skilled people will have the most chance to find work, and knowing multiple languages Dutch, French, English and perhaps German is almost a standard requirement Interim offices providing temporary jobs are flourishing in a search to avoid the high labour taxes

Belgium has one of the highest tax rates in the world An employer who pays a salary about â¬1500 a month actually pays another â¬1500 or more in taxes Where does this money go to? It goes to the social network People only pay a small charge for healthcare, for example And the budget for education, arts and culture is enormous The budget for defense is however very tiny

Although Belgium is undesirable for building wealth, it's a good place for someone who already is wealthy to reside because there is very little capital gains tax some forms of capital gain is not taxed at all

What do you think about Belize?

How expensive is Belize?