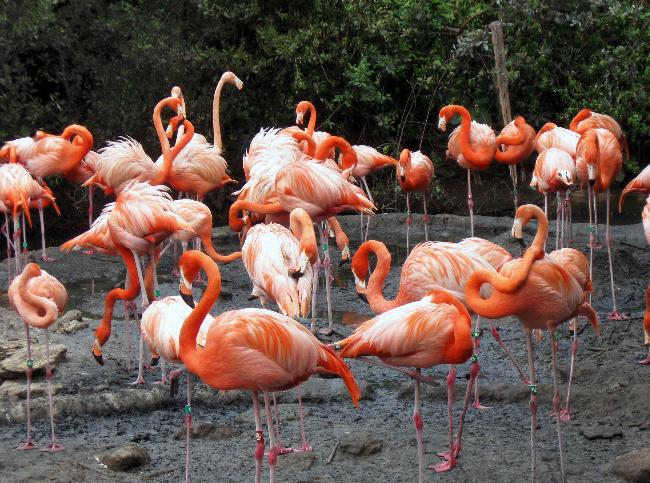 Bermuda consists of about 138 islands and islets, with all the major islands aligned on a hook-shaped but roughly east-west axis and connected together by road bridges Despite this complexity, Bermudans usually refer to Bermuda as "the island" In terms of terrain, the islands are comprised of low hills separated by fertile depressions, and interspersed with a complex set of waterways

The best time to visit Bermuda is from Spring through to Autumn Although the island is an associate member of the Caribbean Community CARICOM, it is not actually in the Caribbean Sea and has a different climate It is much farther north, but the warm waters of the Gulf Stream help give it a quasi-tropical atmosphere

The islands have ample rainfall, but no rivers or freshwater lakes As a result drinking water is collected on the roofs of all buildings by law and in special catchment areas, and stored in tanks under the ground for each home or property Bermuda has a mild, humid subtropical maritime climate though gales and strong winds are common in winter The hurricane season is from June to November

Bermuda was first settled in 1609 by shipwrecked English colonists headed for the infant English colony of Virginia The first industry on the islands was fruit and vegetable cultivation to supply the early American colonies The islands took a carefully unofficial role during the American War of Independence, with much of Washington's armaments coming from a covert and likely locally complicit raid on the island's armoury After US independence and during the Napoleonic wars, Great Britain found itself without access to the ports now on the US east coast Because of this situation and Bermuda's convenient location between British Canada and Britain's Caribbean possessions, Bermuda became the principal stopover point for the British Royal Navy's Atlantic fleet, somewhat similar to Gibraltar

The American Civil War and American Prohibition both added considerably to the island's coffers, with Bermuda forming an important focal point in running the blockades in both cases During the Second World War, a large US air base was built on the islands and remained operational until 1995, and Bermuda served as the main intercept center for transatlantic cable messages to and from occupied Europe

Tourist travel to Bermuda to escape North American winters first developed in Victorian times Tourism continues to be important to the island's economy, although international business has surpassed it in recent years Bermuda has developed into a highly successful offshore financial center A referendum on independence was soundly defeated in 1995 For many, Bermudian independence would mean little other than the obligation to staff foreign missions and embassies around the world, which can be a strong obligation for Bermuda's small population

The Thursday Emancipation Day and Friday Somer's Day before the first Monday in August are when Somerset and St George play cricket, a tradition since 1901 Almost all businesses, including tourist attractions, shut down and large numbers of tents appear throughout the islands on beaches and roadsides It's a four-day weekend, Bermuda-style Bermudians make the most of it, sporting their team's colours, feasting and even doing some legalized gambling with their "Crown and Anchor" dice game

The principal language spoken is English, although many Bermudians have a strong accent Bermuda has a unique accent as it's not really similar to any other Caribbean country Most people claim it resembles the Southern US in some cases Portuguese is the second most widely spoken language

What to see in Bermuda

What to do in Bermuda

Go to one of Bermuda's lovely pink sandy beaches:

The bed of the former Bermuda Railway which was dismantled in 1948 after 17 years of service Many sections still exist as a public walking trail stretching from St George Town in the east end, through Pembroke Parish near the City of Hamilton and on toward Somerset Village in the west end Many station houses, trestle footings and railway ties can be found It offers spectacular views of the island and waters along its length

Bermuda has many examples of large fortifications and smaller batteries spread throughout the island which were built between 1612 after first settlement and manned until 1957 For its small size the island had approximately 100 fortifications built Many have been restored, primarily the larger ones, and are open to the public with dioramas and displays Many have their original cannons in place Some lie on outlying islands and islets and can only be accessed via boat, or have been incorporated into private properties and resorts Some of those which can be accessed are:

Bermuda's currency is the Bermudian dollar BMD or B$, which is divided into 100 cents It comes in all the same denominations as US currency, except for a more widely used dollar coin and a two dollar bill The currency is directly tied to US currency, so USD $1 always equals BMD $1, and US dollars are accepted everywhere in Bermuda at par Bermudian dollars are not, however, accepted in the United States

Bermuda can be expensive Because of Bermuda's steep import tax, all goods sold in stores that come from off the island carry a significant markup When buying groceries or other non-souvenir items of that nature, be aware that the best prices are usually away from the more "touristy" areas For example, one cup of yogurt might cost about $160 at a grocery store near hotels; it will cost 25% less at a grocery store further from the tourist attractions, and only 10 cents more than in the United States When buying these sort of things, go to where the locals go

A nice assortment of stores exists in Hamilton, especially on Front Street The area can be explored easily by foot Front Street, is one of the main shopping streets, and is facing the harbor In recent years, two of the largest and oldest department stores on Front Street have closed However, AS Coopers, first established in 1897, remains

Shopping can also be found in the easily walked town of St George as well as in Dockyard, which has a small shopping mall Smaller stores can be found throughout the island offering a variety of goods

Food and eating in Bermuda

Two relatively unique Bermudian dishes are salted codfish, boiled with potatoes, the traditional Sunday breakfast, and Hoppin' John, a simple dish of boiled rice and black-eyed peas Shark hash was made, fish cakes were traditional on Fridays, hotcross buns at Easter, and cassava or farine pies at Christmas With the high-end tourist market, great effort has been expended by hotel and restaurant chefs in developing an ostensibly 'traditional Bermudian cuisine', although this has usually meant adapting other cuisines, from West Indian to Californian, in line with the expectations of visiting clientele Most pubs serve a typical British Pub fare, although the number of these establishments has diminished as premises are lost to development, or establishments are redeveloped to target the tourist market note the loss of the Ram's Head, the White Heron, the Rum Runner, and the Cock and Feather redeveloped into the Pickled Onion, with a nouveau menu On the other hand, over the same period Bermuda gained its first and only Irish pub, Flannagan's While lobster and other seafoods are often featured on the menu, virtually everything is imported from the US or Canada Although this shows in the price of even casual dining and groceries, it should be noted that locally produced foodstuffs are typically less varied, poorer quality, produced in smaller quantities, and more expensive Most bananas, for instance, will have a 'Chiquita' sticker, and are larger than those grown locally which do have the advantage of ripening on the plant

Restaurants can be found all over the island, with the largest concentration in the city of Hamilton and St George town Also, there are several at some of the hotels which are outstanding, although pricey At Elbow Beach Hotel, Cafe lido is excellent, and Southampton Fairmont Waterlot Inn, although sometimes crowded and noisy, has excellent dining

Both drinks are comparatively very sweet

There are many exclusive and four star accommodations such as:

There are also a wide variety of B&B style accommodations and smaller guestroom hotels with kitchenettes such as:

The exorbitant cost of accommodation and airfares has had a negative effect on tourism, which is shrinking by >25% every year Local government therefore hopes for more budget airlines to come to the island now only USA3000 from Baltimore and some JetBlue Flights are available Cruise ships are scape-goated for the decline in hotel stays Compared to Caribbean destinations Bermuda is at least twice to five times as expensive for a similar product

Bermudians have been successful in implementing policies devoted to making sure the native-born primarily black population is not excluded from economic prosperity and professional opportunities, in favor of foreign workers primarily white Laws are in place to encourage the hiring of qualified Bermudians and to building a future in which it is the rule, rather than the exception, for native-born Bermudians to be professionally trained and promoted, and for young Bermudians to see a future in which they can hold places of leadership and progress within their own country

Many Caribbean nations have faced the challenge of rising "emergency" emigration as native-born populations are being shut out of upper-level professional opportunities through the importation of foreign workers This is a practice which many see as a reversal of hard-won struggles against the racial discrimination and slavery-born caste systems of the past, and has resulted in striking decreases in the quality of life for these nations and the rise of widespread social problems

Because of a small population, economic prosperity and an early-response, Bermuda has been able to comparatively stem the tide of such problems and maintain a higher standard of living for all of its people, rather than cultivate a pervasive racial caste system of tourists and foreign workers, served and entertained by native-born blacks who provide 'color and culture' but without an equal footing in society

What do you think about Bermuda?

How expensive is Bermuda?