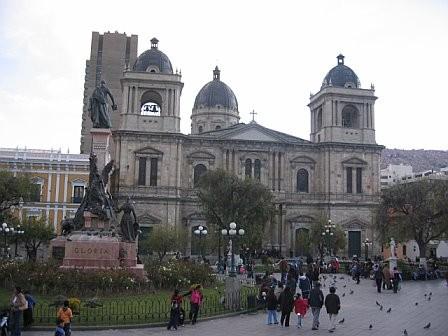 Bolivia, named after independence fighter Simon Bolivar, broke away from Spanish rule in 1825; much of its subsequent history has consisted of a series of nearly 200 coups and counter-coups Comparatively democratic civilian rule was established in the 1980s, but leaders have faced difficult problems of deep-seated poverty, social unrest, and drug production Current goals include attracting foreign investment, strengthening the educational system, and waging an anti-corruption campaign

Bolivia's climate varies with altitude from humid and tropical to cold and semiarid In most parts of the country winters are dry and summers are somewhat wet Despite its tropical latitude, the altitude of cities like La Paz keeps things cool, and warm clothing is advised year-round

Bolivia has 37 official languages - more than any other country in the world, of which Spanish often called Castellano, Quechua, and Aymara are the main ones The others are In rural areas, many people do not speak Spanish Nevertheless, you should be able to get by with some basic Castellano Bolivia is one of the best places in which to learn or practice your Spanish because of their very clean, deliberate accent There are many options for studying Spanish in Bolivia, and they are usually very good often, the program includes a very good homestay component

What to do in Bolivia

Currency can be exchanged for US dollars and most South American currencies at casa de cambio agencies or street vendors Expect to negotiate for a favorable exchange rate, as most vendors will try to make money off a tourist

US dollars are widely accepted in hotels, tourist shops, and for large purchases

Food and eating in Bolivia

The cuisine of Bolivia might be called the original "meat and potatoes" -- the latter locally called papas from the Quechua were first cultivated by the Inca before spreading throughout the world The most common meat is beef, though chicken and llama are also easily found Pork is relatively common Deep frying chicharron is a common method of cooking all sorts of meat, and fried chicken is a very popular quick dish; at times the smell permeates the streets of Bolivian cities Guinea pigs cuy and rabbits conejo are eaten in rural areas, though you can sometimes find them in urban restaurants as well A common condiment served with Bolivian meals is llajhua, a spicy sauce similar to Mexican salsa

Breakfast desayuno typically consists of any of several of meat-filled buns:

Many people also start off the day with some concoction involving fruit:

Juice bars appear at most markets Shakes either with water or milk are 2-3Bs Locals can be seen to drink Vitaminico an egg, beer and sugar concoction or "Vitima" which includes coca leaves

Bolivia's traditional alcoholic drink is chicha, a whitish, sour brew made from fermented corn and drunk from a hemispherical bowl fashioned from a hollowed gourd round-bottomed so you can't put it down It's customary to spill a bit of chicha on the ground before and after drinking it as an offering to Pachamama, the Inca earth godess

Offering a favorable exchange for Western tourists, lodging can be found at very reasonable prices throughout the country, from hostels to luxury hotels During a 3 week trip in 2003 I stayed in hostals and the going rate per night was never more than the equivalent of US $ 350

What do you think about Bolivia?

How expensive is Bolivia?
(1 BOB = 0 USD)
TripAround.org, your travel companion