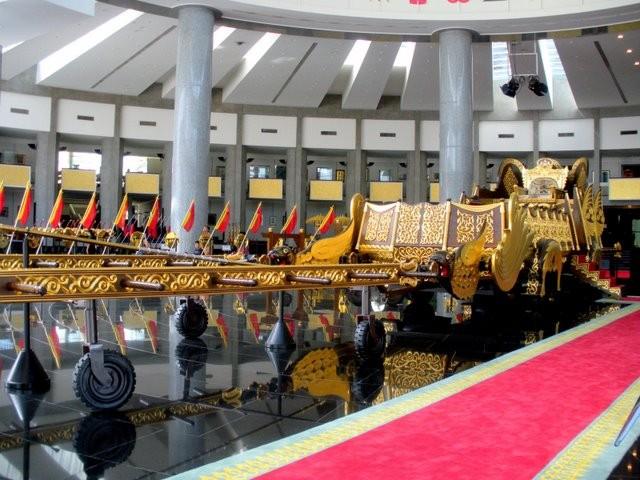 Brunei is a pint-sized and fabulously wealthy oil-rich sultanate with a population of 398,000 as of 2008

The Sultanate of Brunei's heyday occurred between the 15th and 17th centuries, when its control extended over coastal areas of northwest Borneo and the southern Philippines Brunei subsequently entered a period of decline brought on by internal strife over royal succession, colonial expansion of European powers, and piracy In 1888, Brunei became a British protectorate It was offered to join Malaysia as a state in 1963, but opted out of the Federation due to a disagreement on the amount of its oil income that would have to be given to the central government in Kuala Lumpur Independence was achieved in 1984 The same family has ruled Brunei for over six centuries

The backbone of Brunei's economy is oil and gas and the Sultan of Brunei is, famously, one of the richest people in the world with an estimated personal wealth of around 40 billion dollars Per capita GDP is far above most other developing countries, and substantial income from overseas investment supplements income from domestic production The government provides for all medical services and subsidizes rice and housing

All sectors of economy are fairly heavily regulated and government policy is an odd mixture of subsidies, protectionism and encouragement of entrepreneurship Brunei's leaders are attempting to balance the country's steadily increasing integration into the world economy with internal social cohesion It became a more prominent player in the world by serving as chairman for the 2005 APEC Asian Pacific Economic Cooperation forum Plans for the future include upgrading the workforce, reducing unemployment, strengthening the banking and tourist sectors, and, in general, widening the economic base beyond oil and gas

Brunei is officially an Islamic state, with many large beautiful mosques across the country Sale of alcohol is banned Bringing in meat, other than seafood which has not been certified "halal", slaughtered according to Islamic law, is also banned During the fasting month of Ramadan, many shops and restaurants will be open However, eating, drinking or smoking in front of people who are fasting is considered rude and asking permission is appropriate

The bulk of the population is Malay 67% and there is also a significant Chinese minority of some 15% as well as a number of indigenous peoples, including the Iban and Duson tribes who inhabit the jungle upriver and the Temburong district, the smaller eastern part detached from the rest of Brunei There is a large number of foreign workers who work on the oil and gas production or in lower positions such as restaurant staff, field workers and domestic staff The male to female ratio is 3:2 More than a quarter of the people are short term immigrant workers, most of whom are men

Brunei's climate is semi-tropical, and Bandar Seri Begawan's is sub-tropical The temperature can reach 33Â°C in January The temperature is range from 14-33Â°C Rainy season is always mild and humid, followed by a hot and humid dry season The difference between the two seasons is not that marked, however

Brunei's topology is of a flat coastal plain rises to mountains in the east, the highest point being Bukit Pagan at 1,850 meters, with some hilly lowlands in the west

There are no typhoons, earthquakes, severe flooding and other forms of natural disasters to contend with, and the biggest environmental issues is the seasonal haze resulting from forest fires that is caused by illegal clearing of land in nearby Indonesia

The official language of Brunei is Malay, but English is widely spoken and understood While all Bruneians are able to speak standard Malay, the local dialect of Malay is almost incomprehensible to other Malay speakers Solely among the Malay-speaking states, Brunei also officially uses the Arabic script for Malay known as Jawi, although most signs are written both in Jawi and Roman letters Nevertheless, the Roman alphabet is still the more commonly used script when writing Malay in Brunei

The ethnic Chinese community in Brunei continues to speak a variety of Chinese dialects, including Hokkien, Teochew and several others

What to see in Brunei

What to do in Brunei

There are many eco-tours which typically go to the Temburong district by boat then to a native "longhouse" It is then followed by a powered boat by the natives up the river to the Belalong National Park, a reserve in the Borneo rainforest There is a canopy walk and research centre at the park headquarters

Jerudong Park was once a decent theme park with a multitude of rides Sadly, a downward cycle of neglect, declining admission and unaffordable maintenance costs led to the closure and sale of most of the big-ticket rides, including the three rollercoasters This has given the park a sad "circus left town last week" air about it Most people who visit only go at night to avoid the heat during the day Outside the park, but very close, is a small complex of restaurants which is open at night, though only a few of the stalls are still operational The local papers have reported plans to renovate the park with a new selection of attractions, but as of March 07 it remains to be seen what these attractions will be and when they will be operational

As of March 2010, there's a talk going around that Jerudong is getting better and work to improve the place is taking place

The Brunei Dollar is tied to the Singapore Dollar at a 1:1 rate By law both currencies can be used interchangeably, so if you're coming in from Singapore, there's no reason to change money as your cash will be readily accepted Likewise, any leftover Brunei Dollars can be used at par in Singapore However, many stores refuse Singapore notes with seemingly microscopic tears in them, and notices to this effect are posted at the cash register Malaysian Ringgit RM will also be accepted in a pinch, but the exchange rate may not be in your favour The Ringgit is not available at Brunei banks but can be obtained from moneychangers

The Brunei Dollar is divided into 100 cents There are banknotes 10 from B$1 to a whopping B$10,000 handy if you're shopping for Rolls-Royces and coins 11 of 1 to 50 cents All smaller notes and the 2004 series of larger notes are printed as brightly coloured polymer notes

By South-East Asian standards Brunei is roughly on par with Singapore, meaning roughly twice as expensive as neighboring Malaysia You can reduce costs by eating at local restaurants and avoiding the more expensive restaurants in hotels Budget accommodation, once very limited, has expanded in recent years and you can now get a decent bed for the night for around B$30

Food and eating in Brunei

Bruneians love to eat out and there are many excellent restaurants in Brunei serving a wide variety of cuisines, thanks to the large number of foreign workers in the country

There is also the local nasi katok, a simple combination of rice and curried beef or chicken, which can be quite spicy It is relatively inexpensive when compared to other food that you can buy, for example local food such as chicken rice However, it is not a healthy option, with few vegetables and too much fat

Another choice is ambuyat, a culinary experience unique to Borneo It is a starchy and gooey paste made from sago that can be dipped into a savoury sauce

Brunei is a dry country: alcohol is not sold anywhere in the country and consumption of alcohol in public is prohibited by law That said, non-Muslim visitors are allowed to bring in up to two litres of alcohol wine or spirits plus up to twelve cans of beer every 48 hours, and there is a wide array of duty-free shops just across the border in Malaysia to cater to this demand However, alcohol permits must be obtained upon arrival in Brunei while going through customs

Many higher-end restaurants allow guests to bring in their own alcohol and corkage is not charged, though this is technically illegal and it's best to keep a low profile if you choose to consume in a public establishment At the lower end particularly Chinese restaurants, many restaurants supply illicit booze under euphemisms like "special tea"

One should definitely try out teh tarik, a sweet milk tea, as well as the wide array of coffee kopi available in restaurants

If you are moving to Brazil to find work, or are thinking it will be easy to find a job, you may want to think again

If you are a native English speaker, you may be able to find an English-teaching part-time job; but don't expect that to save your holidays The pay will be under-the-table without contract There is also a growing demand for Spanish language classes, especially in the major cities In both cases, it's always much more lucrative to find work privately rather than through schools This can be done by advertising in newspapers or weeklies or by putting up signs on the notice boards at universities

What do you think about Brunei?

How expensive is Brunei?
(1 SGD = 0 USD)
TripAround.org, your travel companion