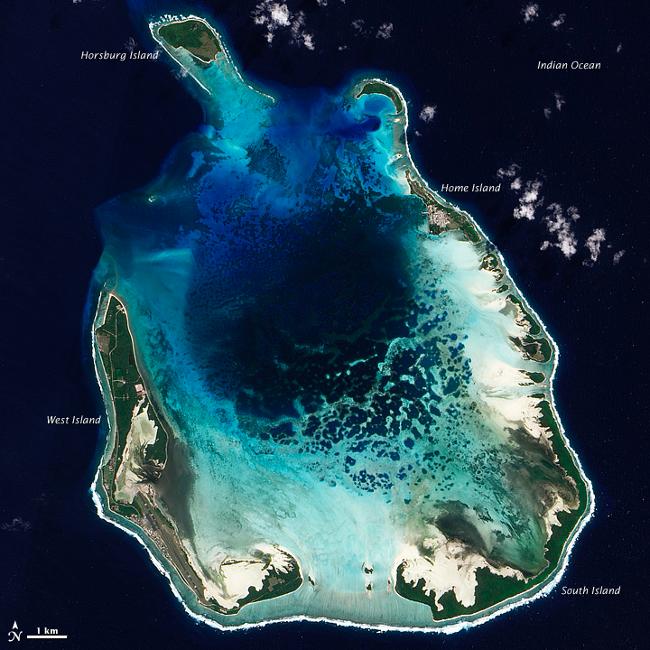 The Cocos Keeling Islands are located in the middle of the Indian Ocean some 2750km north-west of Perth, and 900km west south-west of Christmas Island, its closest neighbour Cocos lies approximately 12Â° south and 965Â° east, locating the islands in the humid tropical zone

There are 27 coral islands in the group Captain William Keeling discovered the islands in 1609, but they remained uninhabited until the 19th century Annexed by the UK in 1857, they were transferred to the Australian Government in 1955 The population on the two inhabited islands generally is split between the ethnic Europeans on West Island and the ethnic Malays on Home Island

Grown throughout the islands, coconuts are the sole cash crop Small local gardens and fishing contribute to the food supply, but additional food and most other necessities must be imported from Australia There is a small tourist industry

Cocos experiences two main seasons which tend to overlap: the trade wind season from April / May to September / October and the calmer doldrum season from November through to April Expect higher rainfall during March through to July January through to August, may also generate the occasional low pressure system usually between February and April However these systems do not normally interfere with holiday plans Rain usually falls in the evenings, bringing glorious sunny days! The average annual rainfall is 2000mm! Temperatures are fairly consistent no matter what the season, remaining around a comfortable 29Â°C with a minimum evening temperature rarely dropping below 20Â°C

As a territory of Australia, English is the most common language spoken on Christmas Island, but is not universal Many senior residents speak dialects of Chinese and Malay as a first language All signs are in English

What to see in Cocos (Keeling) Islands

During the year, as well as the traditional events such as Easter, New Year, Christmas etc, Cocos hosts a number of unique events These include the annual Lagoon swim, where competitors swim from Home Island across the lagoon to West Island Individuals or teams may enter and whether you are a serious contender or wish to join in with the Hash House Harriers who always seem to get themselves disqualified for one thing or another, everyone has a load of fun It finishes in the evening with dinner and presentations to the winners and boat drivers

Other unique events are the mid-year Cocos Ball, quiz nights, Music & Wine festival, Ardmona Cup and Cocos Olympics All visitors are encouraged to join in with these festivities and activities Exact dates vary from year to year Please check with the Cocos Keeling Islands Tourism Association before booking for particular events

Don't forget visitors to the Island are also welcome to participate in the School Fete, Sports Carnival and concert events

What to do in Cocos (Keeling) Islands

There are two restaurants on Cocos The Tropika Restaurant is on West Island, whilst Bunga Melati is on Home Island

Malay cuisine is a selection of rice, noodles, curry and chilli, featuring chicken, beef, lamb and seafood dishes Food is prepared to be flavoursome and not particularly hot, unless requested The Tropika caters to western style meals with a selection of meats, vegetables and salads available from the bistro In the case of all three restaurants, meals are reasonably priced and rarely exceed AUD2000 per person

Don't want to eat at a restaurant? Usually, every third Friday, the different social clubs of Cocos prepare a "food night" at the Cocos Club Excellently priced meals are offered along with raffles and good natured fun Come along, share a meal The Cocos Club also offers visitors a great venue to get to know the locals and join in with any activity that is happening

You cannot bring too much water - estimate at least around 10 liters per day or even more The water from the lagoon in the middle, while not tasting very good, has yet to be proven undrinkable

This 28 room motel is centrally located right in the middle of town, right on the beach and only across the road from the Cocos Club, airport and a short walk to the supermarket Many of the rooms have direct views to the Indian Ocean Ideally suited to couples, singles or twin Private ensuite and air conditioned Three family rooms are available On site restaurant: The Tropika

The most common way of obtaining employment on Christmas Island for non-locals is to check government positions advertised on the Australian mainland Federal Government Employment Gazette, there are occasionally posting for teachers on several years contract from Australia

National Parks, Federal Police and positions related to the Detention Center are occasional advertised on Newspaper and Government Gazette

What do you think about Cocos (Keeling) Islands?