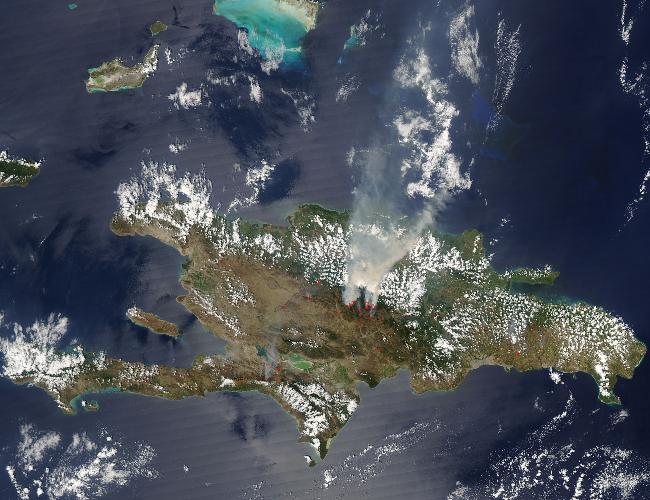 Explored and claimed by Columbus on his first voyage in 1492, the island of Hispaniola became a springboard for Spanish conquest of the Caribbean and the American mainland

The island was first inhabited by the TaÃ­nos, an Arawakan-speaking people who had arrived around AD 600 Within a few short years following the arrival of European explorers the population of Tainos had significantly declined

In 1697, Spain recognized French dominion over the western third of the island, which in 1804 became Haiti The remainder of the island, by then known as Santo Domingo, sought to gain its own independence in 1821, but was conquered and ruled by the Haitians for 22 years; it finally attained independence as the Dominican Republic in 1844

A legacy of unsettled, mostly non-representative, rule for much of its subsequent history was brought to an end in 1966 when Joaquin Balaguer became president He maintained a tight grip on power for most of the next 30 years when international reaction to flawed elections forced him to curtail his term in 1996 Since then, regular competitive elections have been held in which opposition candidates have won the presidency The Dominican economy has had one of the fastest growth rates in the hemisphere

The official language of the Dominican Republic is Spanish You will find some Spanish-English bilingual locals especially in Santo Domingo and tourist areas If you speak some Spanish, most Dominicans will try hard to meet you half way and communicate If you have a problem, you can probably find someone who speaks sufficient English or probably French and possible German, Italian or Russian to help you out Dominicans are quite friendly and will be quite helpful if you are polite and respectful Haitians living in the DR may speak a variation of French and you may hear a few African and Arawakan words interspersed with the Spanish, especially in rural areas Communication should not be a problem even for those who speak only a minimum of Spanish If you are traveling to one of the large all-inclusive hotels, you will have no language problems

One of the best spots in the Colonial District of Santo Domingo to shop is the several blocks long outdoor mall, El Conde street It offers everything from street vendors it is not recommended to eat off these to knock-off name brand clothing for extremely inexpensive prices There are some very pleasant outdoor restaurants that serve as perfect spots to people watch and drink Presidente their most popular beer During the day, there are also several touristy shops where you can buy cheap presents for the family back home including authentic paintings and beautiful jewelry There is also a very nice cigar shop at the end of the mall across from the cathedral Clothes, however, are generally very economical and often of good quality Most prices can be negotiated US dollars are accepted in most areas

Food and eating in Dominican Republic

Additionally, other imported drinks are available for purchase--at least in the towns and cities--they might not be as readily available out in the countryside

Do not drink tap water! Locals, even in the most rural areas, will either boil their water or purchase bottled water Eating salads or other food that may be washed in tap water is not advisable Ice is a bad idea as well, except in luxury hotels and restaurants which produce ice from bottled water If you plan on cooking or washing dishes for longer stays, it is a good idea to rinse everything with bottled or boiled water before use

Lodging in the Dominican Republic is plentiful, with options ranging from huge, all-inclusive beach resorts to more personal options scattered along the coasts and in the cities, including Moon Palace Casino, Golf & Spa Resort Hotels charge a 25% room tax, so inquire beforehand to determine if that tax is included in the listed room price

Most companies do not require anything more than a Passport to work There are a lot of North American companies USA in the country, especially in Santo Domingo and DN aka National District There are good opportunities for English speaking employees The country has several free zones, lots of them in the call center area

There are several volunteer opportunities in the Dominican Republic Many worldwide organizations offer extended travel for anyone willing to volunteer their time to work with locals on projects such as community development, conservation, wildlife sanctuary maintenance & development, scientific research, & education programs

What do you think about Dominican Republic?