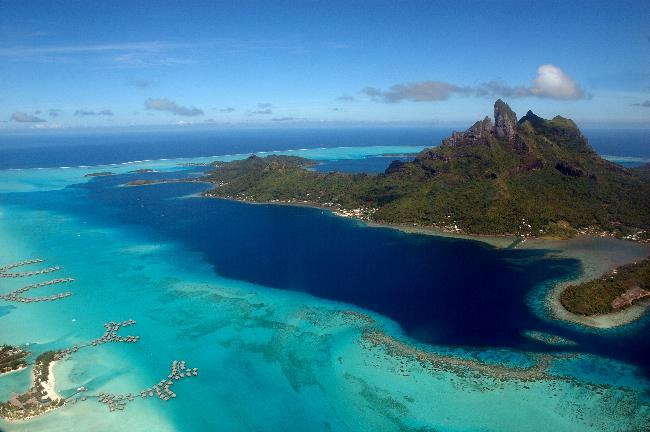 The average ambient temperature is 27Â°C 80Â°F and the waters of the lagoons average 26Â°C 79Â°F in the winter and 29Â°C 84Â°F in the summer But do not worry, most resorts and hotel rooms are air conditioned or cooled by ceiling fans

Summer is from November through April, with a warmer and more humid climate and winter is from May through October, when the climate is slightly cooler and drier When you step out of the airplane, you'll immediately notice that the air is warm and humid Consequently, besides your camera and your extra memory cards, do not forget to pack lightweight cotton clothes, sunscreen lotion and a baseball cap or a wide brimmed hat Synthetic fabrics can get hot and sticky in the tropics

Mixture of rugged high islands and low islands with reefs

The Polynesians inhabited these islands for several hundred years before their discovery by western explorers Several marae religious sites still exist, scattered throughout the islands as evidence of this inhabitation

During the 1960's and 1970's, the French conducted atmospheric nuclear tests in the islands, primarily at Mururoa atoll Testing later moved underground after international protests from other Pacific countries, including a flotilla of yachts and a warship from New Zealand to monitor tests in 1974 Testing continued into the early 1990's, despite attempts to disrupt them by environmental activists In September 1995, France stirred up widespread protests by resuming nuclear testing on the Mururoa atoll after a three-year moratorium The tests were suspended in January 1996

In recent years the islanders have been working towards autonomy and economic independence from France However, the process is a gradual one and is expected to take a decade or two to occur

Here are the main Tahitian words that you may pick up from a conversation:

Tahitians have a tendency to mix up French and Tahitian words in their conversation, so don't be surprised

Be aware that everything is very expensive in French Polynesia Even budget accommodation is tough on the budget, as is food, even groceries So if you visit, take lots of money, you will need it

The following forms of payment are accepted: all legal bank notes, international credit cards and traveller's check The international banks with foreign exchange offices on Tahiti and the most frequently visited islands are the Bank of Tahiti, the Bank of Polynesia and Socredo International hotels also provide this service but be careful: some atolls and islands in the Austral and Gambier group have no banking facilities

Black pearls are the high-end purchase in this part of the world They are beautiful, and of varied quality, so the buyer beware, and the sky's the limit There is lots of inexpensive mother-of-pearl jewellery that make very nice gifts Created only by the giant black-lipped oyster Pinctada Margaritifera which thrives in the lagoons of the Tuamotu Archipelago, the rare Polynesian black pearl varies in color from silver through dark grey with green and pink highlights This Tahitian jewel makes an exquisite and unique souvenir

For visitors who wish to discover the secrets of Tahitian pearls, a visit to one of the pearl farms on the island of Tahaa or on one of the low islands in the Tuamotu is an experience not to be missed

Food and eating in French Polynesia

Fish of all kinds, whether tuna, bonito, mahimahi or the many varieties of lagoon fish are prepared in many different ways: roasted, boiled and raw

The top rated dishes are raw fish a la tahitienne which is marinated in lemon juice and coconut milk and the very popular Chinese ma'a tinito which is a mixture of pork, kidney beans, chinese cabbage and macaroni

Family occasions and celebrations are the time for a huge tamara'a Tahiti Tahitian-style feasts where a meal consisting of suckling pig, fish, breadfruit, yams and fe'i bananas is wrapped in banana leaves and steamed in an earth-dug oven over layers of hot rocks

Bottles of water are readily available Being a French territory, wine is common and easy to find As this is a tropical island, a multitude of fruit juices from pineapple juice to coconut milk are to be found everywhere Pineapple juice from Moorea is not to be missed! It is sometimes better to crack open your own coconut yourself and drain it for lunch Orange juice is the states favorite drink and oranges are grown all along the coastlines

If you're a fan of beer, the Hinano Beer will definitely be one you will like to taste and bring a few cans home

Around fifty international class hotels can be found on twelve islands covering three different archipelagoes - Society, Tuamotu and Marquesas Although the islands of Tahiti, Moorea and Bora Bora provide over 80% of hotel capacity, the lesser known islands are also opening top-of-the-range establishements Several international groups are established: InterContinental, Sofitel, Novotel, Meridien, Starwood-Sheraton, Orient Express, Club Med and Radisson Two local chains, Maitai and South Pacific Management, complete the hotel scene Although complying with international standards, Polynesian style has been respected in the overwater bungalows with the use of pandanus, bamboo and shell light fixtures Some bungalows are fitted with glass-bottomed tables for watching the fishes without ever getting your feet wet

For travelers who prefer the simplicity and authenticity of the local experience, family hotels are the ideal type of accommodation The welcome is warm and friendly Family hotels are divided into four categories: Bed and Breakfast, Holiday Family Homes, Family-run guest houses, Family hotels

For European people coming from an EU country, working in French Guiana is allowed without problem If you're from outside the EU, you will probably need a work permit - check with the French Embassy in your country Do not forget though that the unemployment rate is high But if you work in the health sector doctor, nurse, it will be much easier

Voluntary service: Volontariat Civil Ã  l'Aide Technique VCAT, 8 Conditions: you must be French or from another EU-member state or a country belonging to the European Economic Area You must be over 18 and under 28 years old inclusive You must not have had your civic rights revoked by a court or have been convicted of certain offences

What do you think about French Polynesia?