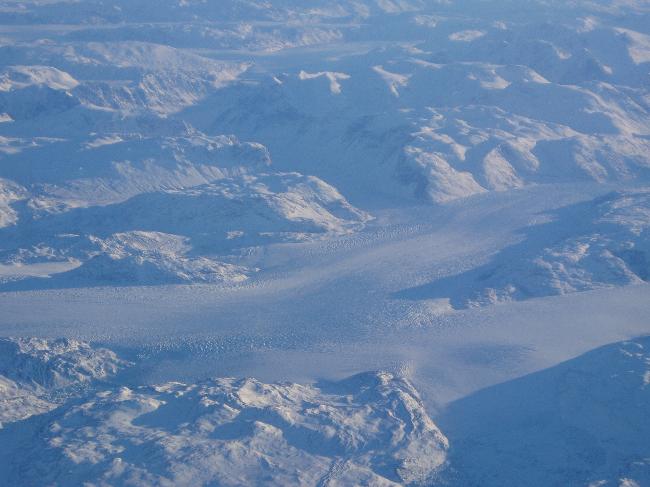 Although some maps with flat projections of the globe tend to make Greenland look the size of Africa, it is actually "only" about the size of Mexico Greenland has the world's lowest population density

It represents some 97% of the area of the Kingdom of Denmark The Danish territorial claim is rooted in the 10th-century explorations of the Vikings, though administrative power has changed hands several times over the centuries due to developments in Europe The native Greenlanders, or Kalaallit, are Inuit descendants of nomads from northern Canada "Eskimo" is offensive in some parts of the Arctic

According to the Icelandic Sagas, Erik the Red chose the name "Greenland" to entice settlers from Iceland In fact, Greenland has far more ice cover about 84% of its immense surface area than Iceland does This may only be legend: the southern coasts the Vikings settled are green in summer, and were likely more so during the Medieval Warm Period

Be careful with maps of Greenland, as many Greenlandic names simply reference a particular geographical feature For example, "Kangerlussuaq" means "Big Fjord" and so is not only the Greenlandic name for SÃ¸ndre StrÃ¸mfjord

When visiting a city or village don't be afraid to ask for directions of shops, places to eat or somewhere to sleep, even if you think there might not be any Most places even Nuuk are small enough for everyone to know where everything is, and therefore no one bothered to put up a sign Don't be surprised to find a fully equipped supermarket inside a grey factory-like building in the middle of nowhere

The official language - Greenlandic Kalaallisut - is actually that of the more populated western coast The eastern dialect is slightly different Both are highly challenging languages to learn, as words are very long and often feature "swallowed" consonants Try uteqqipugut or Ittoqqortoormiit on for size

The good news is that almost all Greenlanders are bilingual Danish speakers, and many will even have a functional command of English Greenlandic words may come in handy for travellers wanting to experience the "real Greenland", though

Greenlandic is different enough from Inuktitut, the language of the Canadian Inuit who share similar historical roots to the Greenlanders, that the two peoples have difficulty understanding each other However, attempts are being made to unify the Inuit language, and Greenlandic - with its existing libraries of translated Shakespeare and Pushkin - seems like the most natural option

What to see in Greenland

What to do in Greenland

These are the names to look for, if you need to buy groceries:

Food and eating in Greenland

Food in Greenland is generally not that different from American or continental European tastes Restaurants carry typical European fare Local food can be purchased at local markets in each town Many Greenlandic restaurants combine traditional foods locally-caught fish, shrimp and whales; also muskox and reindeer with more familiar dishes Expect to find whale meat at a Thai restaurant and caribou in a Chinese joint Nuuk also has several burger joints and a couple of very high-end restaurants, most notably Nipisa, which specializes in very expensive local delicacies Prices are high everywhere, but servings are generally large, especially with fries

A local specialty is Greenlandic coffee Its creation in some places is pure performance and it hits hard: its coffee laced with liberal amounts of kahlua, whisky and Grand Marnier One of the best places to buy is at the Sukhumvit Thai Restaurant, for about $22CAD

Greenland is expensive Nice hotels exist in all of the more visited areas Hotel Hans Egede in Nuuk, Hotel Arctic - with its igloo rooms - and Hotel Hvide Falke in Ilulissat, but cheaper options exist Try for the Seaman's Home hotel in Maniitsoq, Nuuk, Qaqortoq, Sisimiut and Aasiaat Also check with the Nuuk Tourism office for its hostel program, where locals have rooms they will rent out for a third the price of the town's hotels They usually speak Danish and Greenlandic, along with very rudimentary English

What do you think about Greenland?

How expensive is Greenland?
(1 DKK = 0 USD)
TripAround.org, your travel companion