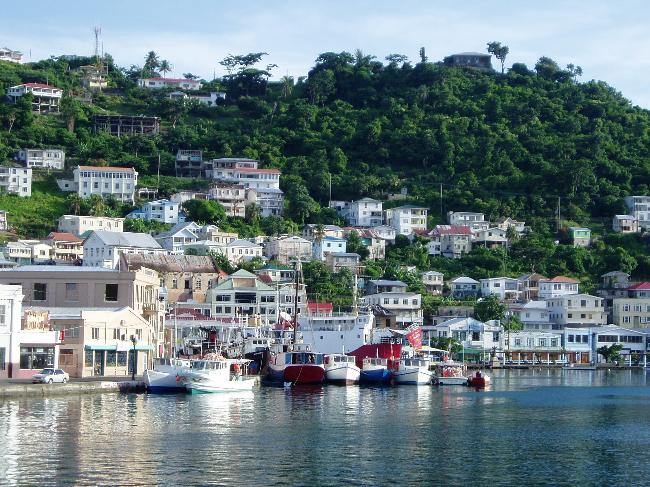 Christopher Columbus discovered Grenada in 1498 The island was already inhabited by the Carib Indians, who had migrated from the South American mainland, killing or enslaving the peaceful Arawaks who were already inhabitants there The Amerindians called their island Camerhogue, but Columbus renamed it ConcepciÃ³n However, passing Spanish sailors found its lush green hills so evocative of Andalusia that they rejected this name in favor of Granada

Over the centuries, although control of the island passed from France to Britain and briefly back to France again, the name endured with just the slightest of alterations, changing from "Granada" to "La Grenade" to "Grenada"

The French were the first to settle Grenada Legend holds that in 1652 the last of the defending Caribs rather than be ruled by the French, threw themselves into the sea from a spot that was christened Le Morne des Sauteurs, and is known today as Leapers' Hill and Carib's Leap

Exploited first for indigo hence the name of an area "True Blue", and later for sugar production, the island prospered and, like many others in the Caribbean, attracted the attention of the British Captured by Admiral George Rodney in 1762, near the end of the European Seven Years' War 1756-63, Grenada reverted to French rule from 1779 until 1783 when the island was restored to Britain by the Treaty of Versailles

The inhabitants' loyalties remained divided between the two European powers for many years, as illustrated by Fedon's Rebellion of 1795 In the course of this violent episode, a group of rebels under the command of the mulatto General Julien Fedon, and inspired by the rhetoric of the French Revolution wreaked havoc on the island and its British settlers in an unsuccessful attempt to reunite with France

From 1784 until its independence in 1974, Grenada remained a member of the British Empire, passing through various stages of colonial status and multiple associations with other regional states In 1967, Grenada became an "Associated State of Great Britain" within the British Commonwealth With this, the island nation gained control of its internal affairs, while the government of Britain continued to control external matters

Early in the twentieth century, it produced one of the region's outstanding leaders, T Albert Marryshow His Representative Government Association, which inspired similar movements in other Windward Islands states and in Trinidad, did much to encourage the liberalization of British rule in the Caribbean

It is ironic that the achievement in 1950 of universal adult suffrage, long a goal of Marryshow's, led directly to his displacement in Grenadian political life by a new figure, Eric Matthew Gairy Whereas Marryshow had been a man of the middle class, Gairy and his Grenada United Labour Party GULP appealed to the lower class, the peasantry Suddenly empowered by the vote, Gairy's supporters swept him to the leadership of the Legislative Council in 1951; he dominated the island's politics for almost three decades

The most successful electoral challenge to Gairy between 1951 and 1979 was posed by Herbert Blaize's Grenada National Party GNP in 1961, mainly on the issue of union with Trinidad and Tobago the "unitary state" proposal Again reflecting the Grenadian penchant for looking outward for support and viability, the GNP campaigned on a platform urging acceptance of the Trinidadian offer of union Although Blaize's party won the election, it subsequently lost a large measure of prestige and credibility when Trinidad failed to follow through on the proposal The GNP's fall from grace paved the way for the return of Gairy, who has never tired of the role of political savior of his country Complete independence was achieved in 1974, with significant opposition, under the leadership of the late Sir Eric Gairy -- a charismatic and controversial figure who had been in the public eye since the early 1950s

In 1979, after a Coup d'etat, an attempt was made to set up a socialist/communist state in Grenada Four years later, at the request of the Governor General, the United States, Jamaica, and the Eastern Caribbean States intervened militarily Launching their now famous "rescue mission", the allied forces restored order, and in December of 1984 a general election re-established democratic government

The last 23 years have been a peaceful, democratic and fruitful back to normal existence, which has included many new building structures and vastly improved infrastructure

English is spoken throughout the country with a Grenadian accent that can sometimes be confused for a different language However, it is in fact English! French Patois used to be the dialect language spoken within Grenada, but it only remains within the older generations and in scattered pockets Most Grenadians only know a few words

What to see in Grenada

There is so much to see in Grenada historic forts, lakes, waterfalls, spice estates - some of them still operational today, spice gardens, floral gardens Grenada won its 7th Gold Medal at the Chelsea Flower Show in London in 2009, rum distilleries with generous samples, plantation houses, Amerindian petroglyphs, etc

What to do in Grenada

Nutmeg is Grenada's cash crop, so be sure to bring some home in some form - whole, jam, jelly, syrup, Nutmed medicinal ointment In addition, you can purchase nutmeg flavored ice cream, which has an unusual flavor that is difficult to find elsewhere Due to Hurricane Ivan in September of 2004, over 90% of Grenada's nutmeg crop was destroyed, but thankfully, you'll now see an abundance around the market, town, and tourist shops Other fine spices include mace, cinnamon, ginger cloves, vanilla, tumeric

To bring herbs/spices back to the US and several other countries, they need to be within properly sealed containers Most responsible sellers offer them packaged - check to be sure

Real vanilla is a steal in the markets, sometimes it can be found for as little as $1US for a 1/2 litre bottle The concentration of the fluid does vary, but in its pure form there is a noticeable and very pleasant difference from the vanilla extract that most North Americans are used to You might also look for dried vanilla beans in podan essential to a full range of kitchen herbs/spices

For liquor rum, see "Drink" below

The large cruise ship pier outside the main harbor offers a small, enclosed, "duty-free" mall It has several shops and food outlets offering both local items and those typically for cruise passengers Prices on local products may be at a slight premium to stores elsewhere on the island

Food and eating in Grenada

Grenada is known for its rum distilleries The three largest companies are Clarke's Court, Westerhall and River Antoine All three offer educational tours that demonstrate the sugar production for rum They are all located on different parts of the island with only Clarke's Court and River Antoine being the true remaining distilleries Although Westerhall is not completely produced here, their special rum with the wax casing is probably the best rum on the island Clarke's Court makes both light and special dark rums which are also quite delicious Be forewarned about River Antoine It has a 75% alcohol content which you are not allowed to export They make a version with 69% for exporting At all the distilleries you can buy small bottles, and rum is sold in most grocery stores and rum shops

In many bars, take care with drinks made with "under the counter" ingredients, eg, highly-overproof rums for "locals" often used in "Pain Killers" They can overwhelm the most experienced drinkers

Greenland is expensive Nice hotels exist in all of the more visited areas Hotel Hans Egede in Nuuk, Hotel Arctic - with its igloo rooms - and Hotel Hvide Falke in Ilulissat, but cheaper options exist Try for the Seaman's Home hotel in Maniitsoq, Nuuk, Qaqortoq, Sisimiut and Aasiaat Also check with the Nuuk Tourism office for its hostel program, where locals have rooms they will rent out for a third the price of the town's hotels They usually speak Danish and Greenlandic, along with very rudimentary English

What do you think about Grenada?

How expensive is Grenada?
(1 XCD = 0 USD)
TripAround.org, your travel companion