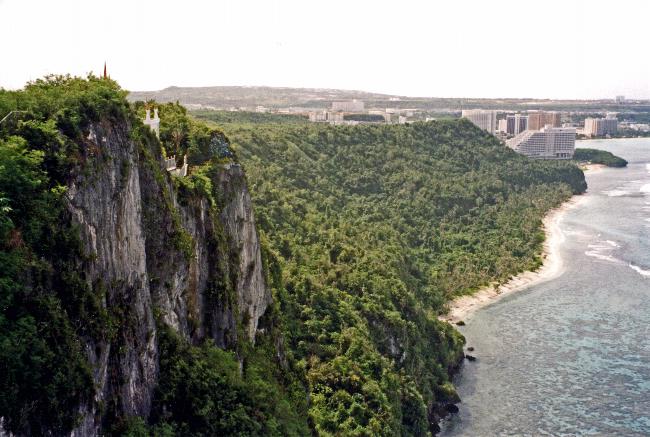 Guam was ceded to the US by Spain in 1898 after the Spanish-American War Captured by the Japanese in 1941, it was retaken by the US three years later The military installations on the island are some of the more strategically important US bases in the Western Pacific

The economy depends on US military spending, tourism, and the export of fish and handicrafts Total US grants, wage payments, and procurement outlays amounted to $1 billion in 1998 Over the past 20 years, the tourist industry has grown rapidly, creating a construction boom for new hotels and the expansion of older ones More than 1 million tourists visit Guam each year The industry has recently suffered setbacks because of the continuing Japanese slowdown; the Japanese normally make up almost 90% of the tourists However, Guam tourism is branching out to attract people from other Asian countries such as Korea and China Most food and industrial goods are imported The possibility of a large military buildup has generated a lot of interest in increasing the tourist facilities on the island

Guam enjoys a tropical marine climate: generally warm and humid, moderated by northeast trade winds The dry season runs from January to June, the rainy season from July to December, though with little seasonal temperature variation During the rains, squalls are common, though destructive typhoons are rare

English is a first language on Guam, though Chamorro words are an integral part of the local vocabulary, and like any area, a local accent of English exists Chamorro borrows many words from Spanish, and many place names are pronounced as in Spanish, with key differences: "y" is pronounced as a "j" and vice-versa, such that the local name Reyes is pronounced ray-jez

What to do in Guam

Scuba diving and snorkeling There is an amazing assortment of tropical fish, even in water less than one metre deep For those who can't swim, glass bottomed boat trips are on offer

There are many retail outlets in Guam, including DFS Duty Free Shoppers which operates several stores in hotels, a large "Galleria," and a store in the Guam Airport Further, visitors to Guam will note some of the same shopping opportunities that exist in "the States" Although there is no Wal-Mart, there is a large K-Mart that does a very high volume of business Indeed, visitors who are used to the voided cavernous K-Marts in the USA may be surprised to find that they can barely squeeze through the aisles of the Guam K-Mart

Food and eating in Guam

Despite its small population Guam has a range of restaurants, including Ya Mon's Jamaican Grill local made soon-to-be franchised Planet Hollywood, Hard Rock Cafe, Tony Romas and Chili's is a building next the the Guam Premier Outlets Major hotels and restaurants serve continental meals and ethnic dishes

Fresh seafood is bountiful Fresh fish, octopus, and lobster are either grilled or baked with vegetables or fruit, sashimi, and in other ways unique to the Pacific

Locals pride themselves in BBQ'ing and it is a frequent event in Guam Families and friends often get together and for BBQs, so if you visit ask about BBQ's It's a good chance you'll get invited!

The main tourist area is around Tumon Bay, which has a number of high-rise hotels and resorts similar to Waikiki Beach with an even larger percentage of Japanese tourists Cheaper accommodations exist near the airport, especially around the village of Harmon Be aware that Harmon hotels tend to be on the seedier side since Harmon is a mixed industrial/residential neighborhood Many of the flights scheduled through Guam to other locations especially in Asia often require an overnight layover, so plan ahead Some hotels offer airport pickup, as taxis can be quite expensive

The largest employers on Guam are the Government of Guam and Continental Airlines, followed by a large duty-free retail firm DFS Guam, the US Federal Government, the hotel industry and services sectors Guam has two large military bases and several smaller military installations that employ many people The only Air Force base is Andersen Air Force Base on the northern tip of the island The US Navy has a large naval station -- Naval Station Guam --located on the west-central part of the island near the village Agat The Navy operates the Naval Computer and Telecommunications Station NCTS south of the village of Dededo Additionally, the Navy controls the Fena Reservoir, which provides drinking water in addition to the aquifer in the northern part of the island

What do you think about Guam?

How expensive is Guam?