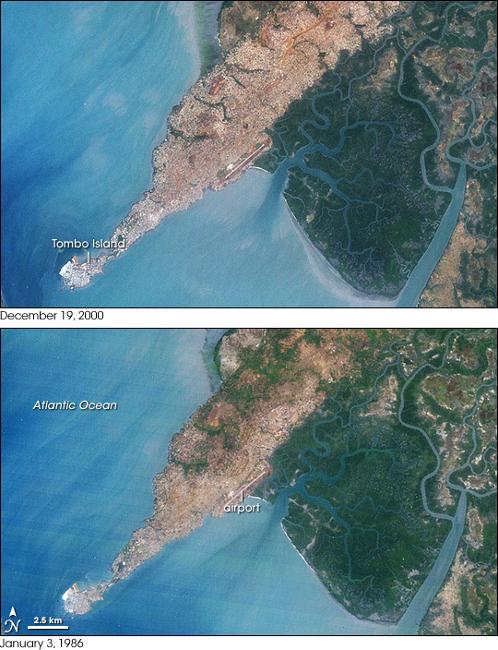 Guinea is a remarkable country with very warm, genuine people but little infrastructure While they have tremendous natural resources available to them which includes around one half of the world's reserves of bauxite, and many major gold, jewel, and metal industries, they rate very poorly in the UN's quality of life index Guinea is roughly the size of the United Kingdom

Guinea belonged to a series of empires until France colonized it in the 1890s, and made it part of French West Africa Guinea declared its independence from France on 2 October 1958 and has had only two rulers since The first president, socialist Ahmed SÃ©kou TourÃ©, faced a lot of criticism from the West for alleged human rights violations and suppression of opposition parties He believed in building a powerful, self-sufficient nation, without reliance on foreign powers

When he died in 1984, General Lansana ContÃ© took over Things did not improve, and the ideals of TourÃ© were soon left behind In 1993, the first elections were held, though their results were disputed - as have those in all subsequent elections ContÃ© died in 2008 without appointing a successor, leaving chaos in his wake Immediately following ContÃ©'s death, on December 23, 2008, a man by the name of Captain Moussa Dadis Camara took power as Guinea's new President staged by a coup d'etat Unfortunately this has proved to be another political blow for Guinea and Guineans Civilian protests have been often met with open fire and physical abuse at the hands of military and police personnel

The coastal region of Guinea and most of the inland have a tropical climate, with a rainy season lasting from Aprl to November, relatively high and uniform temperatures, and high humidity Conakry's year-round average high is 29 Â°C 842 Â°F, and the low is 23 Â°C 734 Â°F; its average annual rainfall is 4,300 mm 1693 in The Sahelian Haute Guinee region has a shorter rainy season and greater daily temperature variations

The official language is French There are numerous ethnic languages, and the three most prevalent are Susu, PularFoulah, Peuhl and Malinke Susu is spoken in the coastal region and in the capital city Toma, GuerzÃ©, Kissi and others are spoken in the interior Sacred Forest region bordering on Mali, Ivory Coast, Sierra Leone and Liberia

What to see in Guinea

In Conakry, there is the National Museum which highlights the distinct ethnic tribes in Guinea and various traditional instruments, masks etc

The main port is located at the tip of the peninsula in Conakry, near the President's Palace You can take a boat from there to the islands of Loos for a day or overnight trip Its a bustling place where fishermen offload their daily catch

What to do in Guinea

In Conakry, one of the best places to grab a beer and hangout is the beach bar in Taouyah, a neighborhood with a large market and mostly residential with some night clubs and restaurants Many expats, including the Peace Corps headquarters, live in the neighborhood and meet up at the beach around sunset for great pizza or fish or chicken dishes There is a great breeze, live music, and lots of locals playing soccer games until the sunsets, especially on the weekends

The French-Guinean Cultural Center has some great musical shows as well as movies, plays, ballets, and hosts exhibitions and conferences It also has a library and multi-media center Members can take out books and use the computers and internet This is a great place to meet expats, and local musicians, and artists Most people there will know the best places to go see a show that week

Outside of Conakry, there are many attractive tourism destinations for the adventurous traveler Infrastructure, such as hotels, roads etc is lacking outside of the capital but you can find basic places to stay with limited electricity powered by generators

The Foutah Djallon area has superb hiking, sweeping vistas, waterfalls and cliffs Fouta Trekking is a local non-profit that promotes equitable tourism They offer hiking tours ranging from three to five days or tailored tours Tourists stay in villages with part of the revenue going back to the villages for community development Labe, the historical capital and seat of the Foutah Empire that reigned in the pre-colonial times, is a bustling city with some interesting history You can buy beautiful traditional cloth in various navy blue colors On the road from Conakry, via Kindia, is the city of Dalaba, where the major chiefs of the country met to determine the fate of the soon to be independent country from the French in 1958 There is an old mansion that you can visit and a ceremonial hut with amazing carvings inside Kindia has some of the best vegetable and fruit produce and thus a lively market

The coastline from Conakry up towards Guinea -Bissau also offers great tourism with beautiful untouched beaches, mangroves, and wildlife viewing Bel Air is a well known tourism destination on the beach about two hours from Conakry on a well paved road There is a large and usually deserted hotel where past political leaders have met Its a very popular destination around major holidays A much nicer place to stay if you like more eco-tourism is Sabolan Village which is a small hotel on a beautiful beach that is off the well paved road that leads to the Bel Air hotel There are about ten modern huts there and a restaurant Its a bit expensive for what you get but the setting is amazing If you have a tent or want to stay in a more authentic and cheaper place, you can go down the beach or along the path, past the actual village, and stay in nice huts made by a local villager and now run by his son Expats who work in the mining areas rent out the huts and come on the weekends but you can always pitch a tent You have to bring your own food however

For the more adventurous is a trip to the island archipelago near the Guinea-Bissau border called Tristao You can drive from Conakry to Kamsar and from there you can get on a local boat to the Tristao islands The boat takes four hours and usually runs once or twice a week You can sometimes get lucky if there is a fishing boat going back to Tristao but they are usually very heavily loaded and may not be as safe as the passenger boat Manatee, turtles, and many different bird types live in the Tristao archipelago Its a very isolated place with many animist traditions still in existence

Kamsar is the main bauxite mining export town, where major shipments of bauxite leave from the Boke region There are some pretty good hotels and restaurants that cater to the mining executives and expats The Boke region is the main bauxite mining area Boke, the administrative city of the region, has an interesting colonial museum, some decent hotels, and a Lebanese store on the main road where everyone goes to watch the football games soccer and have cold Amstel lights when the generator is on

They do not sell a lot of trinkets in Guinea, but they do have wonderful clothing that you can purchase The tailors there are very skilled and can create an outfit very fast approximately a day Masks, wood statues, djembes drums, traditional clothing, bags made in Guinea are sold in many of the areas outside of major hotels in Conakry and along the roadside Always barter, especially if outside a major hotel as prices there are higher A good rule of thumb is to halve whatever the opening price is and also to walk away if the prices don't come down Negotiations are supposed to take awhile and are a way of figuring out the "walk away" price point for both buyer and seller

The largest market in Conakry is Madina market You can find everything and anything there Be careful of pickpockets, mud during rainy season and traffic Its a pretty hectic and chaotic place but you'll find the best produce, electronics etc at the best prices You can hire a young boy to haul out your purchases for you if you are walking back to a parked car or where you're staying Cost is about 5000 GF $1

In certain parts of the country you can also find some nice carvings, many of which are created in the city of Kindia

Food and eating in Guinea

Many options are available for dining For a mere 20,000 Guinean Francs roughly $4 USD, you are able to dine on delicious cultural foods from Africa If your tastebuds would prefer something international, many other choices are available as well The beef in Guinea is very good, and is highly recommended Pork isn't served because of the religion There are good restaurants that are Lebanese which has European styled breakfasts

Outside of the Capital, Conakry, you can can often enjoy local dishes consisting of Guinean style rice and one of the 4 main sauces with sometimes beef or fish in some cases at a'hole in the wall' local restaurant for less than $1 3,000-6,000 Guinean Francs depending on the exchange rate Trust me, you will leave full!

In Kankan, Guinea Haute Guinee, there are few places to choose from if you wish to eat at a more decent restaurant There is Hotel Villa and Hotel Bate As of mid 2008, these were the top two places for lodging and meals A typical plate can cost anywhere between 35,000 and 55,000 Guinean Francs Note that prices of food and drinks can often dramatically increase at the spur of the moment and without any explanation!

Fruits are very inexpensive here, especially compared to the higher costs in neighboring countries Mali, Ivory Coast and Senegal For those who love pineapples, on the national road which literally goes from the North of the country to Conakry in the South you can find people selling this tasty fruit very cheaply on the side of the road in and around Kindia! Mango fruits, oranges and bananas can also be found in abundance throughout the country and at a cheap rate, especially at road sides!

Another alternative to eating out is eating "IN" Since Guineans are generally welcoming and friendly people you may be invited to their home to share a meal! Most Guineans eat together from one big dish Enjoy the experience and don't drink the local water if and when they offer it to you Please have your bottled water handy Coyah, Milo, etc

You will likely find cheap hotels in every town or village in Guatemala In the main tourist areas, there are also many high quality hotels

What do you think about Guinea?

How expensive is Guinea?