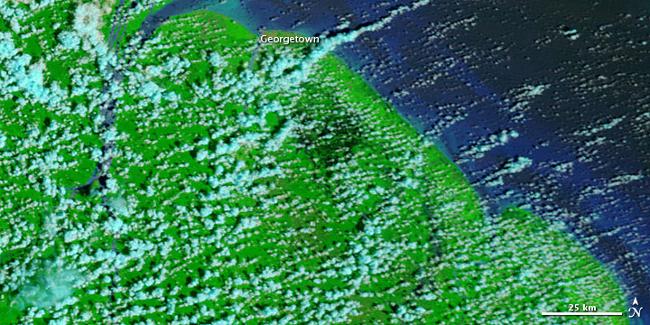 Originally a Dutch colony in the 17th century, by 1815 Guyana had become a British possession The abolition of slavery led to the purchase of some villages such as Victoria and Anns Grove to name a few, as well as black settlement of urban areas and the importation of indentured servants from India to work the sugar plantations Chinese were also imported to work on plantations but were found to be unsuitable read Guyana History The Colonial powers employed a system of "divide and rule" among the freed Africans and the other ethnic groups which were brought and encouraged to settle in the then colony The policy was employed even during slavery when indigenous "Amerindians" were used to hunt runaway slaves The result was an ethno-cultural divide, significant elements of which have persisted to this day and has led to turbulent politics, dissolution of attempts at nationalistic cultural development and the non-existence of anything resembling a "National Identity"

Guyana achieved independence from the UK in 1966, but until the early 1990s it was ruled mostly by socialist-oriented governments In 1992, Cheddi JAGAN was elected president, in what is considered the country's first free and fair election since independence Upon his death five years later, he was succeeded by his wife Janet, who resigned in 1999 due to poor health Her successor, Bharrat JAGDEO, was reelected in 2001 and again in 2006

What to see in Guyana

What to do in Guyana

Eco-Tourism is a booming industry in Guyana

With an exchange rate of ~200 Guyana Dollars per US Dollar, Guyana's has great shopping with amazing bargains There are numerous markets and recently, shopping malls, in Guyana Stabroek Market is a quaint market located in Georgetown Trips to the market for tourists are best done in groups or with a local with whom you feel comfortable Muggings are possible but not frequent It is the largest in Georgetown

Lots of locally made and beautiful crafts ranging from paintings; to sculpture; to leather purses, satchels, wallets; hand-painted, tie-dyed and batiked fabrics, pressed flowers, sun hats; semi-precious stones and hand-crafted costume jewelry using indigenous materials, can be purchased at an esplanade outside the Central Post-Office near the National Museum in downtown Georgetown Ask around and you'll find out about the craft and gift shoppe as well as galleries

Guyana is also noted for its exceptional gold jewelry

The cost of living in Guyana is relatively very high, because most of the items used in daily life are imported with high transportation costs involved Monopoly in some business sectors also causes higher profit booking and further raising of prices For example as of January, 2010 the approximate prices of Gasoline Petrol is US$5 per litre, electricity price is US$033 per unit A domestic gas bottle gas cylinder is over US$ 20 Rent for average family accommodation is US$500 per month in safer urban locations and personal income tax, which is 3333% one third of total taxable income makes the cost of living further higher

Food and eating in Guyana

The most popular national drink is Caribbean-style dark rum Some national favorites are XM "10" Year OLD, produced by local beverage giant BANKS DIH Limited, and El Dorado and X-tra Mature which both offer 5, 10, 12 and 25 year varieties El Dorado also offers a 15 year old variety which has won the "Best Rum in the World" award since 1999 Mix the cheaper ones with Coke or coconut water if you please All are quality enough to drink neat or by themselves with the 25 year-olds comparing with high-quality scotch

Banks Beer produced by local beverage giant Banks DIH Limited is the National beer It comes in a lager and a stout Milk StoutThe beverage giant also bottles and distributes Heineken Beer and Guiness Stout under license Also available are the lighter Carib Trinidad and Tobago and darker Mackeson's Guinness is brewed locally under license and is a bit sweeter than its Irish counterpart, but just as good Polar Venezuelan and Skol Brazilian can be found randomly throughout the country You can also find Heineken and Corona at posher bars in Georgetown

There are several hotels in Guyana, all are equipped with great amenities There are some which are suitable for budget travel

Guyana has a fair number of expatriates Most of them are from developing or poor countries working in different sectors across the country Persons who are not Guyanese, have to get a work permit after employment is confirmed Caribbean citizens might have some exemptions under the CSME scheme There are a number of volunteer organizations like Project Trust, Peace Corps, VSO and CESO working in Guyana Some people have come on short stints to volunteer with churches, and other non-governmental organizations It is the responsibility of the host organizations or employer to arrange necessary travel/work permits from the concerned Ministry for prospective employee

Salary in Guyana is normally paid in Guyanese Dollor GYD, which is the local currency The present exchange rate is 206 GYD for 1 USD United States dollar Income Tax which is one third of total taxable income is usually deducted by employer The overall cost of living is relatively very high, making an expatriate employee's life very difficult in Guyana

What do you think about Guyana?

How expensive is Guyana?