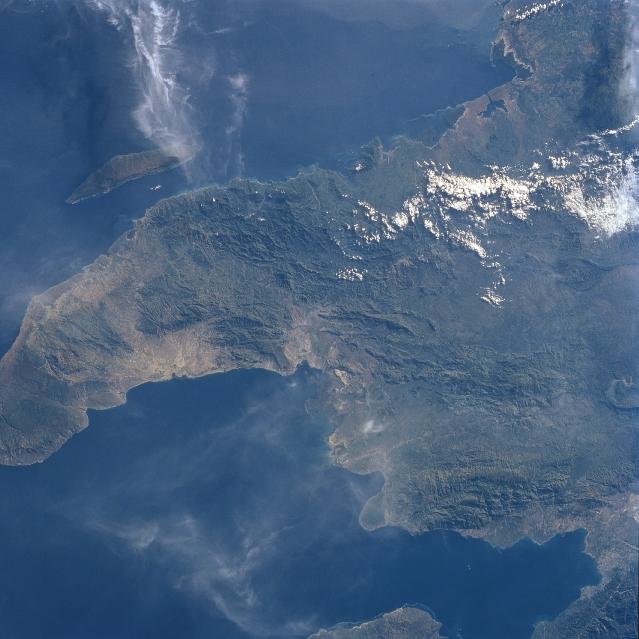 Haiti is the poorest nation in the Western Hemisphere Tourists who are unsettled by grinding poverty probably should visit elsewhere However, for those with patience and an open mind, Haiti reveals a rich culture that is unique among post-colonial nations

It is extremely helpful when traveling in Haiti to have a local contact, through a church, a hotel, or just through making friends with someone Experiences like dining locally, riding on a tap-tap, or strolling through one of the insanely crowded outdoor markets are great fun and very worth doing, but much safer and easier if you have a trusted Haitian to go along as a guide and interpreter

Tropical; semiarid where mountains in the east cut off trade winds Haiti lies in the middle of the hurricane belt and is subject to severe storms from June to November Experiences occasional flooding, earthquakes and droughts

Mostly mountainous, with a wide, flat central plain to the north The highest point is Chaine de la Selle at 2,777m

Haiti was inhabited by the native Taino Indians when Christopher Columbus landed on December 6th 1492 at Mole St Nicholas Columbus named the island Hispaniola The Taino were a branch of the Arawak Indians,a peaceful tribe that was weakened by frequent violent invasions by the cannibalistic Carib Indians Later, Spanish settlers brought smallpox and other European diseases to which the Taino had no immunity In short order, the native Taino were virtually annihilated There is no discernible trace of Taino blood on Haiti today The current inhabitants have exclusively African and/or European roots In the early 17th century, the French established a presence on Hispaniola and in 1697 Spain ceded the western third of the island to France Through the development of sugar and coffee plantations, the French colony of Saint-Domingue flourished, becoming one of the wealthiest in the Caribbean Enslaved Africans were brought to Haiti to work on these French plantations Work conditions for slaves on Haiti were the harshest imaginable, as sugar and coffee plantations required intensive labor The French imported an enormous slave labor force, which ultimately vastly outnumbered the French planters 10 to 1 In August 1791, Saint-Domingue's nearly 500,000 slaves revolted, burning every plantation to the ground and killing all the Frenchmen they could find After a bloody 13 year struggle, the former slaves ousted the French and created Haiti - the first black republic - in 1804 Since its revolution, Haiti has not had a stable government It has had 32 coups over the centuries - a series of military dominations that focused on maintaining power and extracting wealth from a large peasant base A lack of government and civil unrest led to the American occupation of Haiti from 1915 to 1934 While order was brought about and much infrastructure was developed in Haiti by the United States, Haitians resented the occupation of their country The withdrawal of Americans by President Roosevelt in 1934 left a power vacuum that was filled by Haitian military elite The Forbes Commission in 1930 accurately noted that "the social forces that created instability still remain--poverty, ignorance, and the lack of a tradition or desire for orderly free government" The following 20 years saw ruthless struggles for power that ended with the ascension of FranÃ§ois Papa Doc Duvalier Duvalier's brutal dictatorship lasted nearly thirty years, with his son, Jean-Claude BÃ©bÃ© Doc Duvalier assuming power after Papa Doc's death in 1971 BÃ©bÃ© Doc was ousted in 1986, followed by more bloodshed and military rule that culminated in a new Constitution in 1987 and the election of former priest Jean-Bertrand Aristide as president in 1990 After a coup d'etat, Aristide went into exile Most of his term was usurped by a military takeover, but he returned to office in 1994 after Haitian General Raoul Cedras asked the United States to intervine, negotiating the departure of Haiti's military leaders and paving the way for the return of Aristide His former prime minister, RenÃ© PrÃ©val, became president in 1996 Aristide won a second term as president in 2000, and took office early in 2001 However, accusations of corruption were followed by a paramilitary coup that ousted Aristide in 2004 Since then, Haiti has been occupied by UN peacekeeping troupes MINUSTAH and has once again elected RenÃ© PrÃ©val as head of state in February 2006

What to do in Haiti

The Haitian gourde, pronounced goud in Creole, is the currency of Haiti It's notionally divided into 100 centimes, but as the exchange rate as of July 2009 hovers around 40 gourdes to the dollar, you're unlikely to see these Haiti has become famous for its very informal yet interesting bustling marketplace Everything is sold here ranging from the curiously appealing to the dullest of objects for rather inexpensive prices Haggling is wise and recommended and not doing so may cost you precious dollars There are various large retail supermarkets in the capital that offer a variety of items Haiti is a world of crafts waiting to be sought after

Although by law, merchants are required to quote prices in gourde, rarely do they do so Instead, virtually everything is priced in "dollars" -- not USD but Haitian dollars which are equivalent to 5 gourdes This practice is a holdover from the US occupation of Haiti in the early 20th century, during which the gourde was pegged at 5 gourdes to the US dollar

Food and eating in Haiti

There are many guest houses throughout Haiti However, these are quite hard to find while overseas Many of these guest houses run about 25 to 35 dollars a night and include 2 to 3 meals during the day Sometimes these houses are associated with orphanages eg, Saint Joseph's Home for Boys

Saint Joseph's Home for Boys is in Delmas 91, near PÃ©tionville

What do you think about Haiti?

How expensive is Haiti?