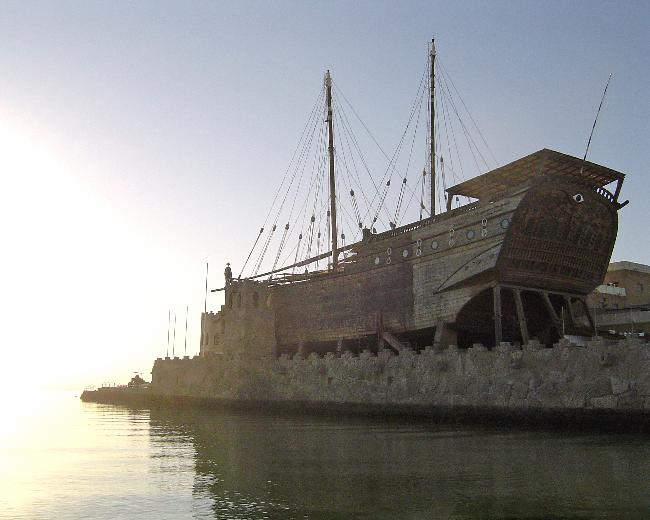 The Kuwaitis trace their roots to the Al-Anisa and the Al-Utub tribe from the Najd province, in modern Saudi Arabia They moved to Qatar and then to Al-Qurain The word 'Kuwait' is derived from Koot, the Arabic word for fortress, which is in modern day Kuwait bay around 1710 By 1752, the long term residents of Al-Qurain decided that the instability of the region, caused by warring tribes, called for the establishment of a stable government The Al-Sabah tribe was chosen to rule, and the first Sheikh was Sabah ibn Jaber, who ruled as Sabah I, from 1752 to 1756 The Sabah's were skillful diplomats, and weathered out religious and tribal strifes successfully They dealt with the Ottomans, the Egyptians and the Europeans Mubarak I signed an agreement with the British making Kuwait a British Protectorate in 1899 The British were in Kuwait for quite a while by then, and as early as the 1770's Abdullah I had a contract with the British to deliver mail for them up to Allepo in Syria The agreement gave the British control of the Kuwaiti foreign policy in exchange for military protection In the 20's and the 30's, the chief source of revenue was pearls But around that time the Japanese started flooding the international market with cultured pearls and this source of income was in decline In 1938, oil was first struck at the Burgan oil field in Kuwait, and by 1946, they started exporting it In 1961, Kuwait nullified the treaty of 1899, and became an independent nation Kuwait was attacked and overrun by Iraq on 2 August 1990 Following several weeks of aerial bombardment, a US-led UN coalition began a ground assault on 23 February 1991 that completely liberated Kuwait in four days; February 26 is celebrated as Liberation Day Kuwait spent more than $5 billion to repair oil infrastructure damaged during 1990-91 It is currently ruled by Sheikh Sabah Al Ahmad AL Jaber Al Sabah after the demise of Sheikh Jaber al Ahmed al Jaber al Sabah in January 2006

Dry desert; intensely hot summers; short, cool winters Natural hazards : sudden cloudbursts are common from October to April; they bring heavy rain which can, in some rare cases, damage roads and houses; sandstorms and dust storms occur throughout the year, but are most common between March and August Temperatures range from 15oC in Dec to as high as 50oC in Aug

Arabic official Although in schools the classical version of Arabic is taught; and just like everywhere in the Arab world, Kuwaitiâs use the Kuwaiti dialect in everyday conversation English is widely used and spoken Most of the traffic signs in Kuwait are bilingual English is taught as a second language in schools in Kuwait beginning at the first grade Many Kuwaiti's speak English fluently as there are lots of private English and American schools and universities where all subject are taught in English and Arabic is taken as a subject A lot of Kuwaitis are enrolling their children in these schools

What to see in Kuwait

See Kuwait City for listings of attractions in the city Kuwait is not the ideal vacation spot in the region, but if on a business trip, there are some sites worth seeing

What to do in Kuwait

See Kuwait City for more activities in the city

The national currency is the Kuwaiti dinar KD, KWD At around US$350 to one dinar January 2009, the dinar is the highest valued currency unit in the world, and prices can thus take some getting used to: a 50-dinar hotel room comes out to almost US$200/night

Notes issued before 1994, many of which were stolen during the Iraqi occupation, are not considered legal tender You're unlikely to see these in Kuwait the designs are clearly different, but unscrupulous dealers elsewhere have been known to try to pass them off See the Central Bank of Kuwait 6 for pictures

Exchanging money can be difficult and exchanging travelers cheques even more so Stick to ATMs, which are ubiquitous and work fine Higher-end establishments accept credit cards

Although Kuwait is a tax haven 0% VAT and 0% income tax It would be hard to manage on under US$80 per day, and you can very easily spend US$200 just on an ordinary hotel room

Tipping is generally not necessary A 12% service charge is tacked onto your bill in expensive hotels and restaurants, but if you want some of the money to actually go to the staff, leave a little extra

Petrol prices are one of the cheapest in the world and most of the time are cheaper than water, literally!

Kuwait is a tax free country Custom-made items, imported items, and shipping out of the country can be expensive, so shop wisely

Food and eating in Kuwait

There is a huge array of restaurants in Kuwait Because the nightlife is non-existant, people go out to restaurants and malls Almost every cuisine is available in high-end restaurants Kuwait is known for its culinary specialties and catering services Restaurants can be found in food courts in malls, and alternatively many international restaurants are grouped together in certain areas in Kuwait, namely: Behind the Roman Catholic Church in Kuwait City Outside the Movenpick Resort in Salmiya In the Marina Crescent Just ask any local where the "Restaurants Road" is and they will guide you to a road in Salmiya packed end-to-end with local restaurants serving a wide array of specialty sandwiches, juices and snacks There are few restaurants that serve traditional Kuwaiti food Al-Marsa restaurant in Le Meridien Hotel Bneid Al Gar location has some traditional Kuwaiti seafood but with a relatively high price tag A better option is the quaint Shati Alwatia restaurant at the Behbehani Villa compound in the Qibla area of Kuwait City behind the Mosquesand another Kuwaiti restaurant is Ferij Suwailih in salmiya area

Alcohol is strictly illegal in Kuwait: it may not be imported, manufactured or served However, some expat-geared restaurants have been known to offer "special" tea, and newspapers regularly report busts of illegal distilleries Unlike neighbouring states; Bahrain, Qatar and UAE Alcohol cannot be even served at hotels or permit holders

Tap water is drinkable, although most of it is desalinated and not particularly tasty, and in summertime, you may have a hard time telling apart the hot and cold taps Bottled water is available everywhere for a few hundred fils

Hotels in Kuwait are expensive, but major Western chains are well represented See Kuwait City for hotel listings Light sleepers should bring ear plugs as public announced prayers are broadcast at 4:30AM, again at 5:00AM and several times during the day

What do you think about Kuwait?

How expensive is Kuwait?
(1 KWD = 0 USD)
TripAround.org, your travel companion