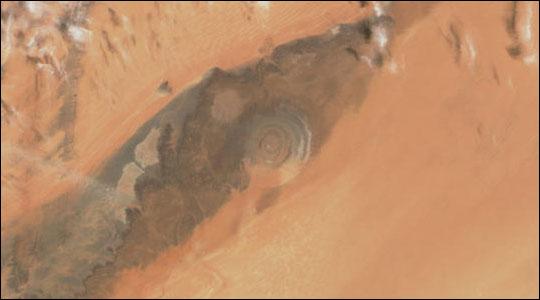 Mauritania is a land about desert and ocean It is of course no wonder that the main attractions for most tourists are the desert in Adrar and Tagant areas around Atar, and the ocean in Banc d'Arguin a natural reserve with dunes ending in the sea, full of millions of birds and protected by UNESCO The Adrar is exactly how you've always imagined the Sahara as: endless ergs dunes and regs rocky desert with tabular small mountains Most tourists stay along the west coast of the country, although there are a few beautiful sights far into the interior rock formations in Aioun, for example If you decide to travel off the beaten path, leave plenty of time to get around

Mauritania is an Islamic Republic Don't be afraid of this political status - most Mauritanians are not extremists, even if the majority of the people in the North are very conservative and quite reserved The Southern part of the country is filled with friendly people, and they are very welcoming, if a little unused to tourists

Travelling to Mauritania is becoming easier, with charter flights from France to Atar through the winter Some charter flights have been canceled this past month due to security concerns Guides and tourist agencies are quite easy to find However, Mauritania is not connected to the international banking system Your Visa card will not work in the local ATM There are now international ATM's at BNP and Societe Generale in Nouakchott and Nouadhibou Otherwise, credit cards are accepted almost nowhere It is easy to change euros, dollars and CFA in Nouakchott, however

The climate is characterized by extremes in temperature and by meager and irregular rainfall Annual temperature variations are small, although diurnal variations can be extreme The harmattan, a hot, dry, and often dust-laden wind, blows from the Sahara throughout the long dry season and is the prevailing wind, except along the narrow coastal strip, which is influenced by oceanic trade winds Most rain falls during the short rainy season hivernage, from July to September, and average annual precipitation varies from 500 to 600 millimeters in the far south to less than 100 millimeters in the northern two-thirds of the country

Hassaniya Arabic is the language of the Moor majority, while other languages are spoken by Southern Black Afrians including Pulaar, Wolof, and Soninke especially in the Guidimakha region around Selibaby French is the second official language and is spoken by many This is especially true near towns In the countryside, individuals may often speak several languages but not French

It is considered polite to say Salaam aleikum when entering a taxi, office or when greeting someone It is the first greeting for most of the dialects spoken in the region

What to see in Mauritania

Souvenirs can be bought at Marche Capital or Marche Sixieme in Nouakchott, or at tourist shops in the Adrar Fabric will be sold in boutiques all over the country, but Kaedi is famous for its tie-dying

In general, the quality of most Mauritanian souvenirs is not as good as one might expect That said, you can find leather products, pipes, wooden bowls, tea pots and silver jewelry among other things be careful with the quality of jewelry Fabric, however, is tie-dyed by hand and can be quite beautiful Fabric will be sold as a mulafa veil--usually gauzy and one piece--or as material for a boubou, with two separate pieces for a skirt and top Fabric is sold anywhere for anything from 1500 UM to 8000 UM, depending on the fabric quality and work involved

When buying anything in Mauritania, feel free to bargain Sometimes the starting price will be three times the actual price Stay friendly, but don't worry about insulting anyone by asking for a lower price

Food and eating in Mauritania

There is a decent variety of restaurants in Nouakchott with plates from 1000 to 2500 UM Most restaurants in the capital offer pretty much the same menu - simple pizzas, hamburgers, sandwiches, and salads There is a string of restaurants on the road from the Stade Olympique to the French Embassy Good ones include Pizza Lina, Cafe Liban, and Le Petit Cafe The Sahara Cafe, on the other side of the stadium, is also a good place for pizza, sandwiches or Lebanese, and has some of the best reasonably-priced food in town Near Marche Capitale, there is a street of sandwich shops that offer near-identical menus, the best of which is the Prince which taxi drivers know by name

Outside of Nouakchott, it is possible to find a hamburger in Atar Otherwise, you are looking at local dishes: fish and rice chebujin in the south and rice and meat or couscous in the north Hole in the wall restaurants can be found everywhere and serve plates from 200 to 500 UM Mechui, or grilled sheep, is also delicious if a little more expensive Look for carcasses hanging by the side of the road Some fruit can be found in most regional capitals Note that most restaurants outside of Nouakchott do not have very high sanitation standards in regards to food preparation Since most small restaurants go under within a few years of opening, your best bet in trying to find one in a regional capital is to just ask locals for directions to whatever is nearby Another alternative, in the absence of a restaurant, is paying a family to prepare food for you, which should be relatively inexpensive no more than 1500 um, even if it takes a while up to a couple hours to buy the food and prepare it

If none of this sounds good, keep in mind that boutiques everywhere stock bread, cookies and sodas if nothing else!

Tea is usually served after a meal, but it is not included with the meal at restaurants If you are offered tea in someone's home, it is impolite to leave until at least the second of three glasses The whole process takes about an hour

Despite being an Islamic country there are a few fun bars in the capital Drinking can be expensive however: beers can go for about $6! There is a nightclub inside the French Embassy compound For the non-French, try the Salamander or the trashy but open late Club VIP Next door to VIP is the Casablanca, a more low-key bar with live music on the weekends Note that it is illegal to import alcohol!

All ranges of accommodation are available, with the highest class hotels available only in Nouakchott and Atar "Auberges" and Campsites can rent beds/mattresses for as little as 1500 ouguiya in the Adrar and Nouadhibou

There is usually at least one hotel in the regional capitals in the rest of the country, although they can be expensive for what you are getting If possible, make friends with a local and try to get invited to stay with their family As long as you don't mind asleeping on the ground on a foam mat bsleeping/eating near animals or cusing a latrine, you will probably end up having a nice, memorable stay

What do you think about Mauritania?

How expensive is Mauritania?
(1 MRO = 0 USD)
TripAround.org, your travel companion