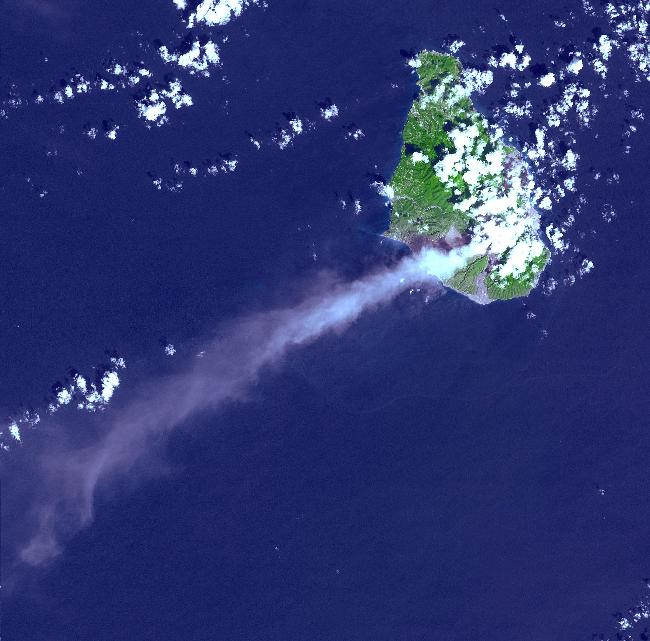 Once a popular get-away destination especially after Beatles producer George Martin opened a studio here, Montserrat has been hit hard by the four elements, both from without and from within First the wind and waves of hurricane Hugo swept through in 1989, damaging 90% of the island's structures Then the earth and fire welled up in 1995, with the volcano of Soufriere Hills forcing the long-term evacuation of 2/3 of the island's population, and catastrophically closing the airports and seaports in June 1997 The capital of Plymouth was covered by 40 feet of ash, and much of the southern end of the island is now uninhabitable

Government offices have since been set up in Brades on the northwest shore of the island, out of harm's way Much of the island's population has returned, with estimates ranging from 4,700 to 9,500, compared to the pre-Hugo/Soufriere high of over 12,000

Temperatures year-around average between 76-88°F 24-32°C, with constant cooling breezes Rainfall is a little more common from July to November

Montserrat is small, but getting larger The erupting volcano is gradually extending the southern end of the island

The people of Montserrat all speak English British dialect, albeit with a local accent

What to see in Montserrat

The volcano! An observation area on Jack Boy Hill on the eastern side gives a view of the ash flows covering the old airport Huge boulders may sometimes be seen, crashing down the slope in a cloud of dust The Monserrat Volcano Observatory on the south-west side has an observation deck3 Tours into the exclusion zone may be possible, depending on the volcano risk level; you will pass through a landscape of abandoned homes and fields, see the volcano close-up, and gaze down at the old capital of Plymouth, now buried in ash and mud

What to do in Montserrat

Montserrat is blessed with natural beauty On land there are lush tropical forests with trails of varying difficulty Many can be enjoyed on your own, however, some require a guide to make the path clear Stop by the National Trust our Tourist Information for a map charge of $10 EC currently

One of the special things about Montserrat are the quiet beaches You most often have them to yourself but check out each one, they are all different

For those who love the sea, the island is surrounded by reefs Snorkeling and scuba diving can be enjoyed from shore or by boat Check with "Scuba Montserrat" in Little Bay for lessons, trips, and equipment 4

Scuba diving is also available at nearby Redonda, an uninhabited island 15 miles to the west of Montserrat There you will find six-foot barrel sponges, Eagle Rays, Stingrays, and the occasional nurse shark For diving trips to Redonda or dive sites closer to Montserrat's shores, contact the Green Monkey Dive Shop in Little Bay They also offer Boat Tours to view the destruction left behind in Plymouth by the volcanic eruptions as well as Kayak Tours and Rental, Deep Sea Fishing Excursions, Dive Lessons, and Equipment Sales and Rental5

For other boat tours or land excursions,stop by the Tourist Board to get the numbers for one of the local guides

Visitors should also check out the Montserrat Volcano Observatory MVO6for information on the Soufriere Hills Volcano The MVO Visitors Centre is open to the public Monday through Thursdays and includes a documentary describing the history and impact of the eruption shown at quarter past the hour every hour between 10:15 - 3:15, informative poster displays, interactive kiosks, and a display of artifacts There is also a fabulous view of the volcano

Unfortunately, there's no breakwater at Little Bay yet where the scuba and tour boats leave from, so if there's a northerly wind, scuba and boat tours may be canceled for a day or two until the weather changes, and the boats can get out Be prepared to go hiking, sightseeing, or just relaxing by the pool or at the beach instead while waiting for the seas to calm enough for the boats to be able to leave Little Bay

Food and eating in Montserrat

Visiting the island is a bargain compared to pre-eruption Montserrat and many of its less geologically active neighbors, as the island is anxious to reestablish its tourism industry The tourism board has private villas for as little as US$700/week

What do you think about Montserrat?