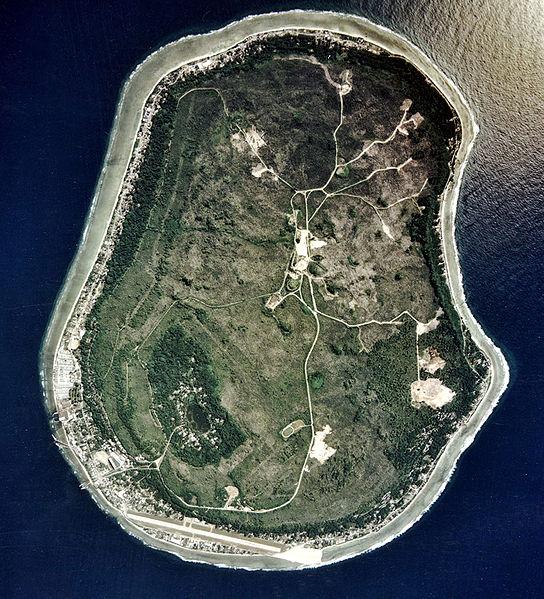 Mining of Nauru's phosphate deposits, which occupied about 90% of the island, began in the early 20th century under a German-British consortium During World War I, the island was occupied by Australian forces and became a dependent territory Nauru achieved independence in 1968 In the 1980s, phosphate exports briefly gave Nauruans one of the highest per capita incomes in the Third World As of 2008, most of Nauru's revenue comes from the export of phosphate to Australia, South Korea and New Zealand as well as other countries The industry is controlled by the Nauru Phosphate Corporation NPC It is anticipated that the phosphate reserves will be completely exhausted before 2050 The sale of fishing licences is the other major revenue raiser Countries such as Australia and Taiwan provide substantial development cooperation funding Despite this, the unemployment rate currently stands at 90%

In 2001 the container ship Tampa rescued several hundred asylum seekers from a sinking Indonesian vessel and attempted to deliver them to Christmas Island in the Indian Ocean, which is an Australian Federal Territory In what is cynically known as The Pacific Solution, the Australian Government established an Off Shore Processing Centre OPC on Nauru where these people were housed, pending assessment of their claims to be refugees In exchange for accepting the OPC Nauru was provided with extra aid by Australia The OPC was closed in early 2008

The climate is tropical, with some rain occurring between November and February

The are a few "sandy" beaches but most of the shallow area around the island is coral reefs Most of the interior of the island is worked-out mining land, which is to be rehabilitated There is a lagoon on the island, the only body of water there

The official language is Nauruan, a distinct Pacific Island language English is widely understood, spoken, and used for most government and commercial purposes

What to see in Nauru

What to do in Nauru

Nauru uses the Australian dollar as its national currency

Food and eating in Nauru

Food is imported from Australia and arrives by ship, usually once every six to eight weeks There are lots of small "eating places", selling Chinese food There is also a fast food kiosk at Capelle's supermarket

There are two hotels, the more expensive Menen on the east of the island and the budget Od'n Aiwo to the west

If you are a doctor:

What do you think about Nauru?