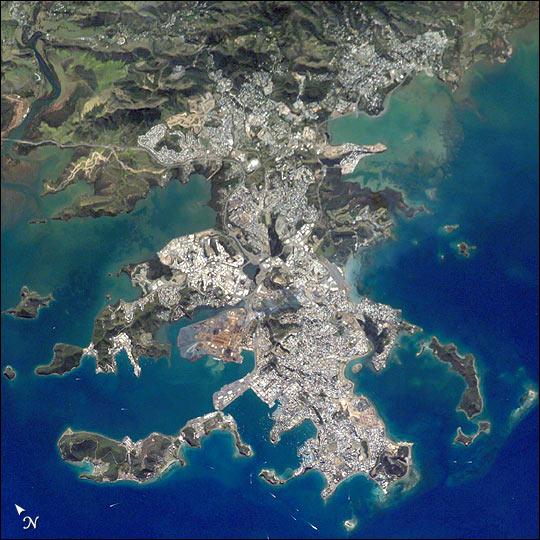 The people of New Caledonia are split into four major groups:

There is a general move towards more autonomy in New Caledonia and it was decided in the NoumÃ©a Accord that the territorial Congress will have the right to call for a referendum on the future status of the territory including possible independence after 2014, at a time of its choosing

Settled by both Britain and France during the first half of the 19th century, the island became a French possession in 1853 It served as a penal colony for four decades after 1864

The islands have been an overseas territory of France since 1956

The 1988 Matignon Accords grant substantial autonomy to the islands; formally under French law Agitation for independence during the 1980s and early 1990s seems to have dissipated A referendum on independence was held in 1998 but did not pass; a new referendum is scheduled for after 2014

In New Caledonia, as elsewhere in France, the national holiday is Bastille Day 14 July

New Caledonia has a semi-tropical climate, modified by southeast trade winds It is often hot and humid in January and February The islands are subject to tropical cyclones, most frequent from November to March During winter April to August the daytime temperature is around 22 degrees The water may still be warm, but it often feels too cool to really want to go swimming

The main island of New Caledonia is one of the largest in the Pacific Ocean and its terrain consist of coastal plains with interior mountains The highest point is Mont Panie 1,628 m

Grand Terre is rich in minerals, and is an important source of many ores, mainly nickel and chromium There is a mountainous interior green with subtropical foliage The outlying islands are coral-based, and have stunning white sand, and sport palm trees

New Caledonia has about 25% of the world's known nickel resources In recent years, the economy has suffered because of depressed international demand for nickel, the principal source of export earnings Only a small amount of the land is suitable for cultivation, and food accounts for about 20% of imports In addition to nickel, the substantial financial support from France and tourism are keys to the health of the economy The situation in 1998 was clouded by the spillover of financial problems in East Asia and by lower prices for nickel Nickel prices jumped in 1999-2000, and large additions were made to capacity Strikes in the building industry in 2001, which lasted four months, adversely affected many other sectors of the economy French Government interests in the New Caledonian nickel industry are being transferred to local ownership

The official language is French, and it is difficult to find English speakers outside of Noumea In Noumea, French, English, and Japanese are widely spoken at hotels, restaurants, and shops To enjoy a place like this, you should really endeavor to learn some French

What to see in New Caledonia

What to do in New Caledonia

The cartoon series La Brousse en Folie and Le Sentier Des Hommes by Bernard Berger will give you an insight in the local culture and tradition The comics are written in French, the former imitating the local accent and grammar or lack thereof

Other than that, plenty of conventional souvenirs shops may be found throughout Noumea

New Caledonia is very expensive, since much of the food needs to be imported There is no culture of bargaining either and attempting such might cause offense

Food and eating in New Caledonia

Buy food from local markets, which are common to almost every town

Restaurants are expensive You can eat quite well for about 10EUR at a couple of eateries opposite the library in town For travellers on a budget, you'll need to observe what the Kanaks do for the best deals

French food is obviously a specialty, but the range of foods available can be a little limited

Try kava You can recognize a Kava bar by a red light outside and dim lighting inside It is about 100CFP compared to 500CFP for a beer, so about a fifth of the price You drink the Kava immediately once you've purchased it and then go off to a dark bench to relax

Volontariat Civil Ã  l'Aide Technique VCAT 4 Conditions: you must be French or from another EU-member state or a country belonging to the European Economic Area You must be between 18 and 28 years old inclusive You must not have had your civic rights revoked by a court or have been convicted of certain offenses

What do you think about New Caledonia?