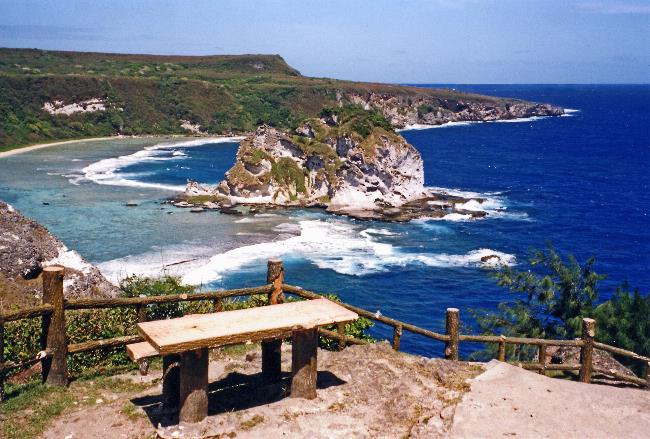 The earliest settlers in the Marianas chain are thought to have descended from the Malay race and to have migrated from the Malay peninsula via Indonesia or the Philippines Early Chamorros were farmers, fishermen, hunters, and built their houses on large stone pillars known today as "latte stones" a few of which still exist on Tinian and Rota

The first European in these waters was Ferdinand Magellan in 1521, who landed on nearby Guam and claimed the islands for Spain Not content to claim the land, the Spanish also helped themselves to whatever else happened to be lying around The natives responded in kind, helping themselves to tools and other items from Magellan's ships Angry at this, Magellan first dubbed the islands "Las Islas de los Ladrones", The Islands of the Thieves, but in 1668 their name was changed to Las Marianas after Maria Anna of Austria, widow of Spain's Philip IV

Nearly all of the islands' native population died out during Spanish rule, but new settlers from modern-day Micronesia repopulated them to some extent Sold to Germany from 1899, the Japanese took over in 1914 and turned the island into a military garrison During World War II, the Marines landed on June 15, 1944 and eventually won the bitterly fought three-week Battle of Saipan

Under US administration as part of the UN Trust Territory of the Pacific, the people of the Northern Mariana Islands decided in the 1970s not to seek independence but instead to forge closer links with the US Negotiations for territorial status began in 1972 A covenant to establish a commonwealth in political union with the US was approved in 1975 A new government and constitution went into effect in 1978 The Marianas are self-governing with locally elected governor, lieutenant governor, and legislature, but the United States government handles defense and foreign relations Local residents are US citizens by birth but do not pay federal taxes or vote in the presidential elections, instead they elect a non-voting representative to the US government

The economy benefits substantially from financial assistance from the US The rate of funding has declined as locally generated government revenues have grown The key tourist industry employs about 50% of the work force and accounts for roughly one-fourth of GDP Japanese and Korean tourists predominate Annual tourist entries have exceeded one-half million in recent years, but financial difficulties in Japan have caused a temporary slowdown Currently, more Korean tourists go to the CNMI than Guam, while more Japanese tourists go to Guam than the CNMI This change is reflected by a shift in airlines servicing the islands, with Korean Air and Asiana Airlines offering direct service to Saipan from Seoul, South Korea, while JAL and ANA offer direct service from Japan to Guam Air service is now offered from most major Chinese cities as well including Shanghai, Beijing, and Guangzhou

The agricultural sector is made up of cattle ranches and small farms producing coconuts, breadfruit, tomatoes, and melons Garment production used to be the largest industry, but the last garment factory closed in early 2009

English is the official language and universally spoken, but 86% of the population speaks a language other than English at home, including the native languages Chamorro and Carolinian Basic Japanese is also spoken by many in the tourist industry Tagalog, Chinese and Korean are also used widely

What to see in Northern Mariana Islands

The CNMI has many WWII bunkers, which fall under the National Park Service as "War in the Pacific" parks There are also memorials on the northern end of Saipan to the Japanese soldiers and civilians who feared capture by US forces and committed suicide by jumping from the cliffs into the ocean

What to do in Northern Mariana Islands

The Marianas' top activity among Americans is scuba diving and snorkeling In additional to the coral reefs you might expect, the waters around the islands were the scene of fierce fighting during World War II and there are many ship wrecks and even rusting tanks stuck on the seabed

Many Asian particularly South Koreans visitors come to the CNMI for gambling especially on Tinian, and karaoke/hostess bars Saipan has a thriving but illegal prostitution industry, most of the workers being from China or the Philippines

The CNMI uses the US dollar exclusively The islands are fairly expensive due to their remote location, comparative wealth and the profusion of free-spending Japanese and Korean package tourists, so figure on at least US$100 a day for travel in any comfort this being also the entry requirement As in the mainland US, tips of 10-15% are expected

Major credit cards are accepted at most retailers and restaurants On Saipan, the major banks, and some restaurants and stores all have ATM machines Bank of Guam has branches on Tinian and Rota, complete with ATMs

While all American and Japanese favorites are readily available, local Chamorro food or touristy versions of it is also offered in speciality restaurants Filipino, Chinese, Thai, Korean, Italian and Mexican dishes are also widely available Most of the hotels have expensive but good quality restaurants, especially Hyatt Regency in Garapan, Aqua Resort in Tanapag, and Pacific Islands Club in San Antonio

The main beers available in Saipan establishments are Budweiser and Miller products, usually sold in bottles only However, a few places do serve Fosters or Victoria Bitter on tap, and a few have Miller Lite on tap as well Other brands widely sold are San Miguel Philippines, Tsingtao China, Sapporo Japan, bottled in Canada, and Corona Mexico Plenty of stores on Saipan have low-priced, good quality wine available, and there are plenty of harder drinks as well as mixers available everywhere

Saipan's accommodation options are concentrated towards giant package hotels Rack rates are often ludicrous but heavy discounts are available, especially outside the Japanese holiday seasons Cheap motels are few, hostels are nonexistent, and camping is not recommended due to security concerns Options are even more limited on Tinian and Rota

US citizens can work freely without needing a permit; however citizens of most other nations need a permit from the Department of Labor Most businesses prefer to employ Filipinos, and also citizens of Thailand, China, South Korea and Bangladesh The minimum wage is $455 per hour

What do you think about Northern Mariana Islands?