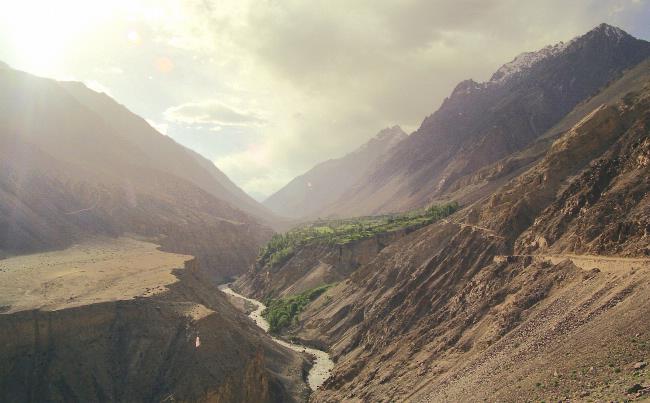 The history of Pakistan traces back to the beginnings of human life in South Asia Pakistan is home to the Indus Valley civilization, which is amongst the oldest in the world Prior to the 1900's the area of Pakistan was the area from which the Muslims ruled over Central and Southern Asia for over 300 years Today Pakistan is made up of people from various races including Arabs from after the Islamic expeditions, Persians from Bukhara and Samarkand, Turks from Central Asia and the native Sindhus who were converted to Islam

The official name of Pakistan was used after the partition of British India into the 2 nation-states of India and Pakistan in 1947 However, the word Pakistan was first used by Ch Rehmat Ali back in 1933 in his declaration, Now or Never - calling for its separation from the Empire Afterwards, British-ruled India was divided into the Islamic Republic of Pakistan with two sections West and East and secular India A third war between these countries in 1971 resulted in East Pakistan seceding and becoming the separate nation of Bangladesh A dispute over the state of Jammu and Kashmir is ongoing between India and Pakistan

Pakistan is one of those few countries in the world which has every kind of geological structure It has the sea, desert Sindh & Punjab, green mountains North West Provice, dry mountains Balochistan, mountains covered with ice, rivers, rich land to cultivate Punjab & Sindh, water resources, water falls, forests etc The North West Frontier Province and Gilgit-Baltistan contain the mountain ranges of the Himalayas, the Karakoram, and the Hindu Kush Pakistan's highest point is K2, at 8,611 meters, which is the second highest peak in the world The Punjab province is a flat, alluvial plain whose rivers eventually join the Indus River and flow south to the Arabian Sea Sindh lies between the Thar Desert the Rann of Kutch to the east, and the Kirthar range to the west The Balochistan Plateau is arid and surrounded by dry mountains Pakistan experiences frequent earthquakes, occasionally severe, especially in north and west

Mostly hot, dry desert; temperate in northwest; arctic in north Flooding along the Indus after heavy rains July and August Fertile and sub humid heat in the Punjab region

Urdu is the national language and is spoken throughout Pakistan as lingua franca In addition to Urdu most Pakistanis speak their regional languages or dialects such as Punjabi, Pothohari, Sindhi, Pashto Pushtun, Balochi, Saraiki, Shina, Burushaski, Khowar, Wakhi, Hindko etc

English is the official language used in all government and most educational and business entities, and is also understood and spoken at varying levels of competence by many people around Pakistan, especially the upper classes and people who have gone through higher levels of education, and those residing in the larger cities

What to see in Pakistan

Observe the wonders of Karachi, Pakistan's former capital and its largest city, situated on the shores of the Arabian Sea The magnificent Quaid-e-Azam's Mazar, the mausoleum of the founder of Pakistan, is made entirely of white marble with impressive north African arches Other places to visit are the National Museum and the beach at Clifton

What to do in Pakistan

Go and see the Silk Road

ATMs exist in most areas and accept major credit cards

Food and eating in Pakistan

Pakistani food mainly consists of various kinds of kababs eaten with either flatbread or rice Food tends range from mild to spicy depending on where you are and who your cook is So state your preference before beginning to eat In general, most of the food that you find in the high end hotels is also available in the markets but European-style food is generally reserved for the former

As you might have noticed, 'Naan' is usually used to pick up liquid and soft foods like shorba and beans Forks and knives not commonly used during meals in Pakistan unless someone is eating rice or is dining out Attempting to cut a naan with a knife may elicit some amusement around you Watching others may help

There are too many shorbas, or sauces/soups, to enumerate However, you should know of the most common ones

Meat is a major ingredient in most dishes The variety is endless, but here are a few examples:

Tap water can be unsafe for drinking However, some establishments have water filters/purifiers installed, in which case the water is safe to drink Packed drinking water normally called mineral water in Pakistan is a better choice

The taste of the water is said to be very good in the north-eastern side of Pakistan, especially in the district of Sialkot Ask for bottled water wherever possible, and avoid anything cold that might have water in it

In the warmer southern region, sweet drinks are readily available throughout the day Look for street vendors that have fruits real or decorations hanging from their roofs Also, some milk/yogurt shops serve lassi Ask for meethi lassi for a sweet yogurt drink and you can also get a salty lassi which tastes good and is similar to the Arabic Laban if you are having "bhindi" in food or some other rich dish There is also a sweet drink called Mango Lassi which is very rich and thick, made with yogurt, mango pulp, and pieces of mango

Alcohol both imported and local is available to non-Muslim foreigners at off licenses and bars in most top end hotels The local alcoholic beer is called 'Murree Beer It is illegal for Muslims to buy, possess or consume alcohol in Pakistan There is a huge black market across the country and the police tend to turn a blind eye to what is going on in private

Hotels are usually found around busy transportation hubs like bus and train stations Don't be fooled by an impressive lobby - ask to see the room and check the beds, toilets, lights, etc before checking in If you have a big enough wallet you may want to try the reputable luxury hotels such as the Pearl Continental 11, Holiday Inn and others located in all major cities as well as many tourist destinations With the exception of these upper-end hotels, the term "hotel" in Pakistan is reserved for simpler establishments, with "Guest House" referring to medium-sized establishments where the standard is typically higher Also note that restaurants are also called "hotels", creating a fun potential for confusion

Otherwise your best way of working is contact the numerous Aid agencies that work out of Peshawar, Islamabad and Rawalpindi

What do you think about Pakistan?

How expensive is Pakistan?
(1 PKR = 0 USD)
TripAround.org, your travel companion