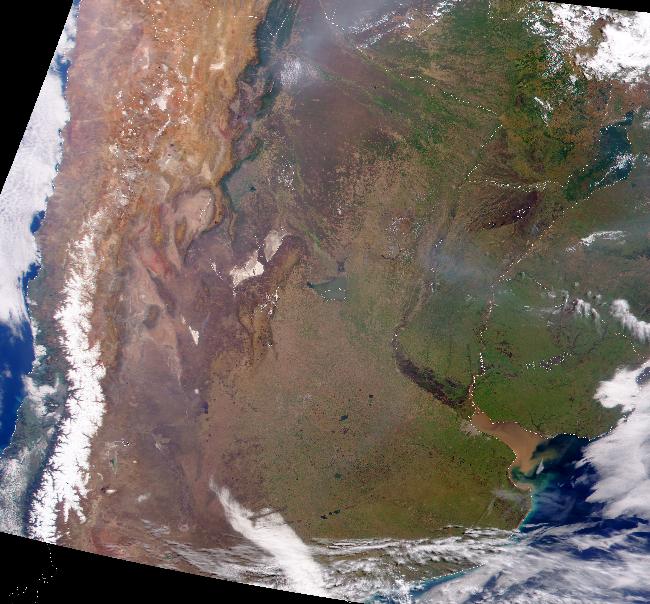 Colonized for 3 centuries by the Spanish, since the 1500s, Paraguay has managed to keep a lot of its indigenous character and identity Nowadays, the mestizos Spanish + Amerindian account for more than 90% of the country's 6 million inhabitants and Guarani is, side by side with Spanish, the country's official language

In the past, Franciscan and Jesuit missions mingled with the Guaranis' dream of Yvy maraÃ«Â´y, a land without evil, and produced singular societies The ruins of the Jesuit Missions of La Santisima Trinidad de Parana and Jesus de Tavarangue, UNESCO World Heritage sites, and several villages throughout the country, are witnesses to that peaceful past

But Paraguay also has a history of blood and tears In the disastrous War of the Triple Alliance 1865-70, waged by the allied forces of Argentina, Brazil, and Uruguay, the country lost two-thirds of all adult males and much of its territory It stagnated economically for the next half century In the Chaco War of 1932-35, large, economically important areas were won from Bolivia The 35-year military dictatorship of Alfredo Stroessner was overthrown in 1989, and, despite a marked increase in political infighting in recent years, democratic governors have been in power since then

With an area of about 406000 sq km, Paraguay is divided between the East and West Chaco regions by the Paraguay River Despite being landlocked, the country is bordered and criss-crossed by navigable rivers

Paraguay has been recently ranked by several research studies as the cheapest country in the world, measured through Purchasing Power Parity Prices, measured in dollars, euros or British pounds are very low

Economy - overview
Paraguay has a market economy marked by a large informal sector The informal sector features both reexport of imported consumer goods to neighboring countries as well as the activities of thousands of microenterprises and urban street vendors Because of the importance of the informal sector, accurate economic measures are difficult to obtain A large percentage of the population derives their living from agricultural activity, often on a subsistence basis The formal economy grew by an average of about 3% annually in 1995-97, but GDP declined slightly in 1998, 1999, and 2000 On a per capita basis, real income has stagnated at 1980 levels Most observers attribute Paraguay's poor economic performance to political uncertainty, corruption, lack of progress on structural reform, substantial internal and foreign debt, and deficient infrastructure
GDP
purchasing power parity - $262 billion 2001 est
GDP - per capita
purchasing power parity - $4,600 2001 est

Both Spanish and GuaranÃ­ are official Most people in Paraguay speak Spanish and use of English is very limited Outside of Asuncion and big cities Guarani is all you will hear Due to the extensive use of Guarani, even those who have managed to learn Spanish do not always speak it very well

Some basic greetings in Guarani include:

In Paraguay Vos is used instead of Tu There is a slight change in conjugation but not big enough that you won't be understood using Tu This Vos is NOT the same as Vosotros Tienes changes to tenÃ©s, puedes changes to podÃ©s, but usually you can get by with changing tu to vos

In the northern, and eastern parts of Paraguay, Portuguese is spoken widely In some places, Nueva Esperanza 80% portuguese speaking, KatuetÃ¨ 60% the majority speak Portuguese, almost always the result of Paraguayan born, or first generation Brazilian immigrants There are many cases of Paraguayans, who were born during the era of Brazilian immigration who speak only Portuguese at home, although also fluent Guarani, but very little or no Spanish

What to see in Paraguay

The currency is the guarani PYG As of January 2010, the current exchange rate is 4,575 Guaranies for 1 US Dollar, and 6,461 Guaranies for â¬1 Always check the exchange rate quotations on the internet or several major newspapers before exchanging money

Prices in Paraguay are very low and a budget traveller will be able to get by on as little as Â£7/$14 a day and even less if camping A clean, single hotel room out of Asuncion should not cost more than $10

Food and eating in Paraguay

You'll find much of the standard South American cuisine here with some Brazilian influence as well Also highly popular are empanadas meat/egg stuffed in a pastry and baked and milanesa breaded and fried chicken/beef/fish - these are considered fast food, and are also found in other countries in the region If you order a hamburger at a restaurant, expect it to come topped with a fried egg Asado BBQ is great, and prices are quite reasonable - 20000 Guaranis $400 US will get you an all-you-can-eat buffet at many nice places 5000 Guarani is enough to pay for a hamburger Paraguayan food isn't particularly spicy, so those who can't tolerate spices won't have problems here There is a lot of traditional food Chipa-a bread baked in an outdoor oven or "tatacua", usually made out of mandioca manioc flour Mandioca is often substituted for potatoes Sopa Paraguaya is a form of corn bread are two of the most well known Mandioca, or MandiÂ´o in Guarani It is similar to a potato, and is normally eaten boiled but can be fried It is eaten almost everyday by Paraguayans, and many have it growing on their land Tortillas in Paraguay are different than in other places in Latin America It is more like a fried dough made with Paraguayan cheese Try Tortilla So'o if you get the chance--it is Paraguayan Tortilla with bits of pieces of meat often marinated with garlic and lime

Tap water in Asuncion, and possibly Ciudad del Este, is potable Tap water in the rest of Paraguay should be treated to make it safe for drinking There have been efforts by PLAN International to bring safe, potable water to communities in rural areas if there is such water available, it is safe to drink Ask before drinking water in rural areas however--many Paraguayans will claim their water is safe to drink even if it's not purified

The national beverage in Paraguay is a tea called mate served hot or terere served cold and is made from the yerba mate plant It is served in guampas, which can be made out of wood or of hallow bull horns, and is drunk through a metal straw called a bombilla The tea is prepared by pouring dry yerba into the cup, then adding water: hot water version is known as mate while the cold water version is known as tererÃ© Mate is usually enjoyed in the early mornings and late evenings year-round, or during especially cold days during the winter Terere is enjoyed year-round as well, though not during the times one would drink mate early mornings/late evenings Often, herbs are added to the tererÃ© water locally called 'remedios' or different herbs to cure different ailments For example, adding coconut to one's mate is supposed to help with headaches The taste is best described as earthy, like a bitter green tea, and it will take getting used to before you can enjoy it Drinking mate or tererÃ© is most definitely one of the social customs of Paraguay Shops will close around noon for a siesta and for a round of mate/tererÃ© with friends If you can get used to the taste and participate, locals will be appreciative This drink is also found in other South American countries such as Argentina, Uruguay, and parts of Brazil

Beer is widely available, as are many liquors The local beer is Brahma or Pilsen Hard liquors are similar to rum

Good accommodation will certainly not be hard to find in major towns, and will seem reasonably cheap if the parameter is the dollar or the euro The exception, however, is Ciudad del Este Cheap accommodation is easy to find, but if you're after something of higher quality you'll have a better chance in the Argentinian Puerto Iguazu or the Brazilian Foz do IguaÃ§u

What do you think about Paraguay?

How expensive is Paraguay?
(1 PYG = 0 USD)
TripAround.org, your travel companion