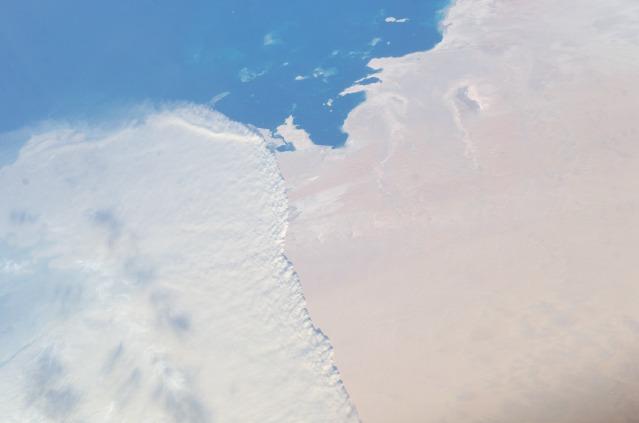 Since the mid-1800s, Qatar transformed itself from a poor British protectorate noted mainly for pearling into an independent state with significant oil and natural gas revenues, which enable Qatar to have a per capita income almost above the leading industrial countries of Western Europe Qatar is home to the Al Jazeera television station and is rapidly entering the modern world, including the staging of the 2006 Asian Games

Oil accounts for more than 30% of GDP, roughly 80% of export earnings, and 58% of government revenues Proved oil reserves of 37 billion barrels should ensure continued output at current levels for 23 years Oil has given Qatar a per capita GDP comparable to that of the leading West European industrial countries Qatar's proved reserves of natural gas exceed 7 trillion cubic meters, more than 5% of the world total, third largest in the world Production and export of natural gas are becoming increasingly important Long-term goals feature the development of offshore natural gas reserves In 2000, Qatar posted its highest ever trade surplus of $7 billion, due mainly to high oil prices and increased natural gas exports, and managed to maintain the surplus in 2001

Arabic is the official language, particularly the Gulf dialect As Qatar was a British protectorate, English is the most common second language, and most locals would be able to speak basic English As Qatar has thousands of guest workers from US, England, Australia, South Africa, China, Japan, India, Pakistan, Philippines, Thailand and various other countries, a word or two of any languages spoken in these areas can be helpful However, with such a mixed international population, English is the de facto language allowing the Qataris to communicate with the people who generally handle all of the menial jobs in their country, so it is widely spoken If you can learn a few words of Arabic, your hosts and any other locals you may meet, will be very impressed and appreciative

What to do in Qatar

The country is surrounded by the sea so watersports are a must Kite-surfing is increasingly popular for the westerners while the locals prefer driving jet-skis at high speed next to the beaches If you like land more than the sea, feel free to go on one of the safari tours to the desert, try dune-bashing with Landcruisers, Nissans etc Visit the collection of widely scattered malls around Doha and enjoy yourself

City Center is currently the largest mall in Qatar and has many stores to choose from Other malls include Landmark has a Marks & Spencer store, Hyatt Plaza becoming a lot better, The Mall okay, Royal Plaza and Villagio owned by the same company that owns Landmark and is home to Virgin, The One, and is ranked one of the best malls in the world by Forbes All of these malls have a huge variety of stores

Blue Salon has huge sales twice a year where you can pick up Armani, Valentino and Cerutti suits for half price There are many things to buy here but be wary of cheap pearls as they may not be real There are many good tailors in Qatar and it is a good place to have clothes made to measure and copied

The souqs in downtown Doha also have a lot to offer, although the goods are usually of cheaper quality than those of the malls Prices are usually negotiable, so practice your bargaining skills Souq Waqif The Standing Souk is the most interesting of the souqs; it was recently renovated to look as it did 50 or 60 years ago You can buy anything from a thobe dish dash, traditional dress for men to a pot large enough to cook a baby camel in! It being expanded to 10 times its current size due to popularity

Food and eating in Qatar

Qatar has seemingly endless options for food, much of it excellent If you would like European cuisine in a fancy setting, visit a hotel like the Ramada or the Marriott, both of which also offer excellent sushi and the choice of having drinks with your meal the only restaurants in town that can do this are in the major hotels, but at a steep price Authentic and delicious Indian and Pakistani food is found throughout the city, ranging from family-oriented places to very basic eateries catering to the Indian and Pakistani workers You may attract some curious stares in the worker eateries, but the management will almost always be extremely welcoming, and the food is very inexpensive

For excellent and truly authentic Thai cuisine, try either Thai Twin near the Doha Petrol Station and the computer souqs or Thai Snacks on Marqab St, and be sure to sample the delicious spicy papaya salad at either location, but be careful, if you ask them to make it spicy, expect for it to burn

Middle Eastern cuisine is everywhere as well, and in many formsâkebabs, breads, hummus, the list goes on It can be purchased on the cheap from a take-out many of which look quite unimpressive, but serve awesome food or from a fancier place, like the wonderful Layali near Chili's in the 'Cholesterol Corner' area that serves gourmet Lebanese food and has hookahs with flavored tobacco Refined Persian cuisine is available for reasonable prices in the royally appointed Ras Al-Nasa`a Restaurant on the Corniche don't miss the cathedral-like rest rooms

Don't be afraid to venture into the Souqs looking for a meal; it will be a unique experience in an authentic setting, and although some of the places you see may look rundown, that's just the area in general, and the food will be probably be quite good Be advised that many of the restaurants in the Souqs as well as the shops shut down during the afternoon hours If you are in a funny kind of mood, you can try a McArabiaâMcDonald's Middle Eastern sandwich available only in the region

There is one liquor store, Qatar Distribution Centre, in Doha To purchase things there, you must have a license that can only be obtained by having a written letter of permission from your employer You can only get a license when you have obtained your residency permit and you will need to get a letter from your employer confirming your salary in addition to paying a deposit for QR1000 The selection is good and is like any alcohol selection of a large supermarket in the West Prices are reasonable although not cheap Alcoholic beverages are available in the restaurants and bars of the major hotels, although they are pricey As far as non-alcoholic drinks go, be sure and hit some of the Indian and Middle Eastern restaurants and juice stalls They whip some tasty and exotic fruit juice combinations that really hit the spot

It is forbidden to bring alcohol in to the country as a tourist; at Doha airport customs xray bags and will confiscate any bottles of alcoholic drink They will issue a receipt valid for 2 weeks to reclaim the alcohol on exit from the country

Hotel prices are on the rise in Qatar, and you can expect to pay as much as US$100 for an ordinary double room in a mid-range hotel Budget accommodation does not seem to exist in Doha The only hostel2 is very hard to find; even the taxi drivers at the airport may have to talk it over! It costs 100 Qatari Riyals per night if you don't have YHA membership, QR90 if you do

The work day starts quite early in Qatar Do not be surprised by 7AM meetings!

In the summer, many small stores and Arab businesses will be open from 8AM-12PM and 4PM-8PM During the "siesta", most people return home to escape the oppressive heat

What do you think about Qatar?

How expensive is Qatar?
(1 QAR = 0 USD)
TripAround.org, your travel companion