Holidays in Saint Pierre and Miquelon 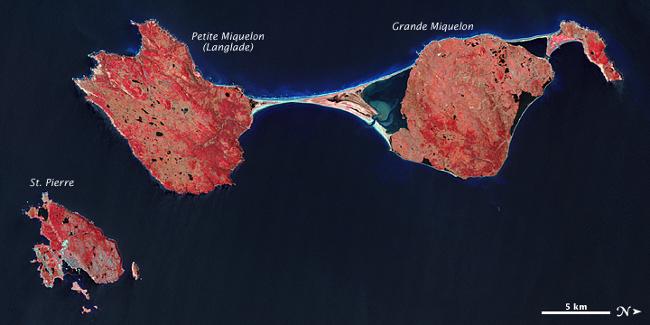 Saint-Pierre was a site for settlement by the French in the early 17th century, later abandoned under the Treaty of Utrecht, and returned to France in 1763 at the end of the Seven Years War As well, the islands became a place of refuge for Acadian deportees from Nova Scotia Saint-Pierre figures frequently in North American British-French relations As well, it profited heavily from US Prohibition, which did not affect this area, part of France It was depopulated and repopulated frequently, and now remains the last vestige of Imperial France within North America

Like its northern neighbour, Newfoundland, it is a key fishing centre close to the Grand Banks, some of the world's richest fishing grounds However, as in Newfoundland, the decline in cod stocks has seriously affected the fishery As a result, tourism is becoming increasingly important to the economy As a travel destination, St-Pierre et Miquelon is ideal for those interested in historical and cultural discovery, eco-tourism and the French language Beyond its history, Saint-Pierre et Miquelon is a wonderful destination because of its mild refreshing climate, its beautiful landscapes, the quality of the air and the warmth of its inhabitants

As a part of France, the area has much in common with Europe, but also with its Canadian and American neighbours

Talking in Saint Pierre and Miquelon

The French spoken in Saint-Pierre and Miquelon is very similar to that spoken in Normandy, Brittany, and Paris The islanders are quite proud of their linguistic heritage

Due to its proximity to English-speaking Canada, Saint-Pierre has become a popular destination for anglophone students wishing to become immersed in French language and culture

The islands have a specialized language teaching facility named the FrancoForum, owned and operated by the local government in Saint-Pierre Staffed by professional French instructors, the institute offers a variety of courses for both students and teachers wishing to improve their fluency

The FrancoForum is best known for hosting Le Programme Frecker, a 3-month French immersion program offered to students at Memorial University in Newfoundland, Canada The program, which began in 1975, was originally housed in a small building at the center of town In 2000, an agreement was reached with the Conseil GÃ©nÃ©ral in Saint-Pierre to relocate the program to the newly built FrancoForum

What to see in Saint Pierre and Miquelon

What to do in Saint Pierre and Miquelon

Like the rest of France, the official currency is the euro, but in Saint-Pierre, it is also common for Canadian & American dollars to be accepted by merchants Also, you will find that nearly everything is on the expensive side, with the notable exceptions of wine and cigarettes

Food and eating in Saint Pierre and Miquelon

Drinking in Saint Pierre and Miquelon

Most bars will have both, even at the smaller resorts

In addition to rums, Piton Lager beer is brewed and bottled on the island and is quite good although it has a slightly higher alcohol content than most American beers It's usually offered in eight ounce bottles, often for $1 US

Accommodation in Saint Pierre and Miquelon

Both islands have a number of hotels, B&Bs, and rental apartments, though none are large â only a couple of establishments on Saint Pierre have more than a dozen rooms, so be sure to book in advance Expect to pay around â¬35-50 for budget accommodations, â¬70-80 for a fancier grade

Cities in Saint Pierre and Miquelon

What do you think about Saint Pierre and Miquelon?

Accommodation in Saint Pierre and Miquelon