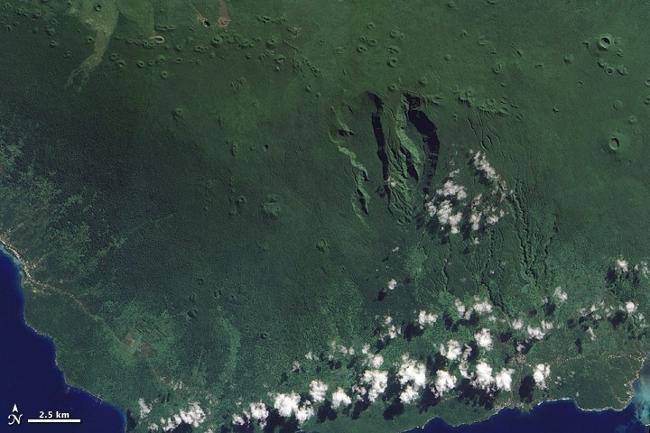 Samoa is composed largely of two islands, Upolu and Savai'i These islands are the result of countless volcanic eruptions, leaving easily visible volcanic cones all over both islands None of the volcanoes are currently active, but small earthquakes often rock the island, reminding people of their presence The last eruption was in 1911 on Savaii

The eerie, lifeless lava fields that remain from this event can be visited easily, since the only sealed road on Savai'i goes right through the middle

Both islands are almost entirely covered by lush vegetation, although almost none of it is the original rainforest that covered the island before humans arrived Most of the land area is given over to plantations or semi-cultivated forest, providing food and cash crops for the locals Since Samoa has been inhabited for over three and a half thousand years, the cultivated lands around villages can often seem like deepest, darkest jungle to a foreignerpalangi

New Zealand occupied the German protectorate of Western Samoa at the outbreak of World War I in 1914 It continued to administer the islands as a mandate and then as a trust territory until 1962, when the islands became the first Polynesian nation to reestablish independence in the 20th century The country dropped the "Western" from its name in 1997

The 19th season of Survivor was filmed on the island of Upolu in mid 2009 The 20th season will also be filmed in Samoa, the location is still unknown

Samoa is a Republic governed by an elected council, or fono

Local government is by village in the form of a Matai, or chief

The economy of Samoa has traditionally been dependent on development aid, family remittances from overseas, and agricultural exports The country is vulnerable to tropical storms, and was hit by two cyclones in quick succession in 1991

The decline of fish stocks in the area is a continuing problem, due to both local overfishing and severe overfishing by Japanese factory trawlers Tourism is an expanding sector, accounting for 16% of GDP; about 85,000 tourists visited the islands in 2000

The Samoan Government has called for deregulation of the financial sector, encouragement of investment, and continued fiscal discipline Observers point to the flexibility of the labor market as a basic strength for future economic advances Foreign reserves are in a relatively healthy state, foreign debt is stable, and inflation is low

Languages spoken include Samoan a Polynesian language and English

What to see in Samoa

What to do in Samoa

Samoa is relatively inexpensive for western visitors Haggling is not customary

Food and eating in Samoa

The usual kinds of European, Asian and fast foods are available, but be sure to try the "umu", which is a traditional pit-oven, using red hot lava stones heated by charcoal Whole pigs, fruits, chickens, fish, etc, are placed among the rocks for many hours, and covered with banana leaves The food has an absolutely delicious smoked flavour, and meats are as tender and juicy as possible

Most places are casual and inexpensive

Samoa brews the amazing Vailima 3 beer Even Germans say it's good beer, probably because the brewery was founded by a German It's cheap and you can buy it everywhere

What do you think about Samoa?

How expensive is Samoa?
(1 WST = 0 USD)
TripAround.org, your travel companion