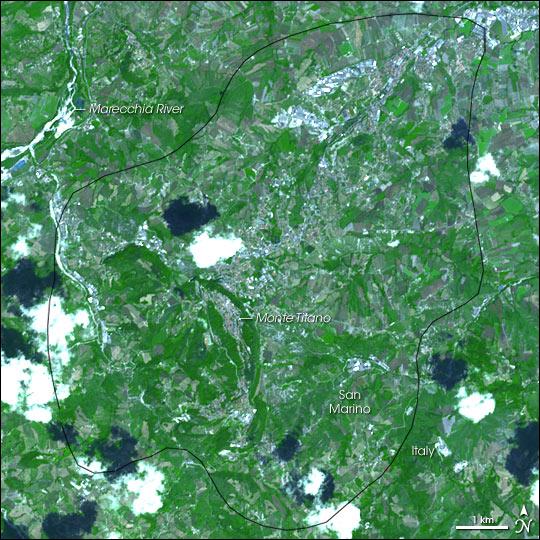 San Marino is the world's oldest republic and Europe's third smallest state It lies 657m above sea level with spectacular views of the surrounding countryside and Adriatic coast, and is situated only 10km from Rimini Legend has it that the founder of San Marino, a stonemason arrived from the island of Arbe in Dalmatia, climbed Mt Titano to found a small community of Christians, persecuted for their faith by the Emperor Diocletian

San Marino is made up of a few towns dotted around the mountain sides The capital of San Marino is itself called 'San Marino' and is situated high up on a mountain top The capital is surrounded by a wall and three distinct towers overlook the rest of the country The site "San Marino: Historic Centre and Mount Titano" has become part of the UNESCO World Heritage List in 2008

The people in San Marino speak a very clear Italian

What to see in San Marino

You can see two of the three towers as seen on the flag of San Marino by purchasing the "Red Card" for â¬450 The "yellow card" â¬3 only allows you to see one of the towers You cannot enter the third tower since there does not seem to be an entrance!

Simply walk around the city The narrow streets are full of surprises The walkways wind up and down the hillside in an interesting way, inviting exploration TheSan Marino lake in Faetano where fish can be caught

What to do in San Marino

Get your passports stamped at the tourist information centre This is an excellent souvenir as they stick a postage stamp and then an official ink stamp over the top, â¬5

Food and eating in San Marino

Supermarkets in San Marino are few and far-between, although the following can help in this area:

Although San Marino has a few hotels, the seaside resort of Rimini has a lot more and is probably a cheaper option

What do you think about San Marino?