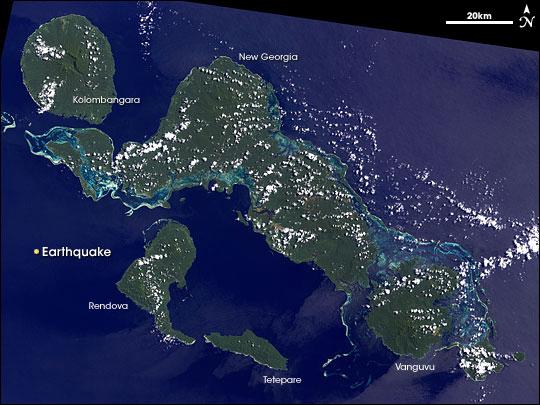 The Solomon Islands are believed to have been inhabited by Melanesian people for thousands of years It is believed that Papuan speaking settlers began to arrive around 30,000 BC Austronesian speakers arrived circa 4,000 BC also bringing cultural elements such as the outrigger canoe It is between 1,200 and 800 BC that the ancestors of the Polynesians, the Lapita people, arrived from the Bismarck Archipelago with their characteristic ceramics

The first European to visit the islands was the Spanish navigator Ãlvaro de MendaÃ±a de Neira, coming from Peru in 1568 The people of Solomon Islands were notorious for headhunting and cannibalism before the arrival of the Europeans Missionaries began visiting the Solomons in the mid-19th century They made little progress at first, because "blackbirding" the often brutal recruitment of laborers for the sugar plantations in Queensland and Fiji led to a series of reprisals and massacres The evils of the labor trade prompted the United Kingdom to declare a protectorate over the southern Solomons in June 1893

In the Second World War, there was fierce fighting between the Americans and the Japanese in the Solomon Islands campaign of 1942â45, including the Battle of Guadalcanal Self-government was achieved in 1976 and independence two years later The Solomon Islands is a constitutional monarchy with the Queen of the Solomon Islands, at present Elizabeth II, as the head of state

In 1998, ethnic violence, government misconduct, and crime undermined stability and society In June 2003, an Australian-led multinational force, the Regional Assistance Mission to Solomon Islands RAMSI, has arrived and restored peace, disarmed ethnic militias and improved civil governance It has also led to the development of facilities catering to the expatriot workers

The Solomon Islands is a wide island nation and the distance between the westernmost and easternmost islands is about 1,500km 930 mi The Santa Cruz Islands of which Tikopia is part, are situated north of Vanuatu and are especially isolated at more than 200km 120 mi from the other islands Bougainville is geographically part of the Solomon Islands, but politically an autonomous region of Papua New Guinea

The Solomon Islands archipelago is part of two distinct terrestrial ecoregions Most of the islands are part of the Solomon Islands rain forests ecoregion These forests have come under great pressure from forestry activities The Santa Cruz Islands are part of the Vanuatu rain forests ecoregion, together with the neighboring archipelago of Vanuatu More than 230 varieties of orchids and other tropical flowers brighten the landscape The islands contain several active and dormant volcanoes with Tinakula and Kavachi being the v most active The highest point is Mount Makarakomburu, at 2,447 meters Many low lying coral atolls dot the region

The islands' ocean-equatorial climate is extremely humid throughout the year, with a mean temperature of 27 Â°C 80 Â°F and few extremes of temperature or weather June through August is the cooler period Though seasons are not pronounced, the northwesterly winds of November through April bring more frequent rainfall and occasional squalls or cyclones The annual rainfall is about 3050 mm 120 in

The islands are home to more than 120 indigenous Melanesian languages, with most citizens speaking the local Melanesian pigin as a lingua franca English is the official language, but spoken by only 1 or 2% of the population

The bulk of the population depends on agriculture, fishing, and forestry for at least part of their livelihood Most manufactured goods and petroleum products must be imported The islands are rich in undeveloped mineral resources such as lead, zinc, nickel, and gold However, severe ethnic violence, the closing of key business enterprises, and an empty government treasury have led to serious economic disarray, indeed near collapse Tanker deliveries of crucial fuel supplies including those for electrical generation have become sporadic due to the government's inability to pay and attacks against ships Telecommunications are threatened by the nonpayment of bills and by the lack of technical and maintenance staff, many of whom have left the country

Food and eating in Solomon Islands

People from Slovenian northern neighbour Austria come to Slovenia just for the food, cause with Subalpine, Italian, Hungarian and Balkan mixture most people will find something to their liking - unless they're strict vegetarians Many say that the pizza here is as good or even better as in neighboring Italy

Generally speaking, Slovenian food is heavy, meaty and plain A typical three-course meal starts with a soup juha, often just beef goveja or chicken piÅ¡ÄanÄja broth with egg noodles rezanci, and then a meat dish served with potatoes krompir and a vinegary fresh salad solata Fresh bread kruh is often served on the side and is uniformly delicious

Common mains include cutlets zrezek, sausage klobasa and goulash golaÅ¾, all usually prepared from pork svinjina, lamb jagnjetina and game divjaÄina, but there is a large choice of fish ribe and seafood even further away from the coast Popular Italian imports include all sorts of pasta testenine, pizza pica, ravioli Å¾likrofi and risotto riÅ¾ota A major event in the countryside still today is the slaughtering of a pig from which many various products are made: blood sausage krvavica, roasts peÄenka, stuffed tripe polnjeni vampi, smoked sausage prekajena salama, salami salama, ham Å¡unka and bacon slanina Recipes for the preparation of poultry perutnina, especially turkey puran, goose gos, duck raca and capon kopun, have been preserved for many centuries Chicken piÅ¡Äanec is also common Squid is fairly common and reasonably priced

Uniquely Slovenian dishes are available, but you won't find them on every menu, so here are some to look out for:

Some Slovenian desserts can also be found:

At the top of the food chain is the restavracija, a fancy restaurant with waiters and tablecloths More common in the countryside are the gostilna and gostiÅ¡Äe, rustic inns serving hearty Slovene fare Lunch sets dnevno kosilo cost around €7 for three courses soup, salad and main and are usually good value

Fast food, invariably cheap, greasy and more often than not terrible — it's best to steer clear of the local mutation of the hamburger — is served up in grills and snack bars known as okrepÄevalnica, where trying to pronounce the name alone can cause indigestion There is no real Slovenian fast food, but Slovenians have adopted greasy Balkan grills like pljeskavica a spiced-up hamburger patty and ÄevapÄiÄi spicy meatballs are ubiquitous, but one of the most tasty options is the Bosnian speciality burek, a large, flaky pastry stuffed with meat mesni, cheese sirni or apple jabolÄni, often sold for as little as €2

Slovenia is not the easiest of places for a vegetarian, although even the smokiest inn can usually whip up a decent fresh salad solata on request Some dumplings and other dishes with cheese sir are vegetarian, and in the cities the Mediterranean chick-pea staple falafel and its cousin the vegiburger have made some inroads on fast-food menus Many restaurants offer a "vegetarian plate", which includes potatoes, fresh or boiled vegetables and soya "steak" There are a rising number of vegetarian restaurants in the cities, particularly in Ljubljana In cities on the coast there is a paradise for vegetarians Local specialities are fish, squids, mussels and octopus

In proper Slovene style, all bases are covered for drinks and you can get very good Slovenian beers, wines and spirits Tap water is generally drinkable except for coast

In Slovenia, coffee kava usually means a tiny cup of strong Turkish coffee prepared in Bosnian style, and cafes kavarna are a common sight with a basic cup costing â¬100-â¬150 One can also order coffee with milk kava z mlekom or whipped cream kava s smetano Coffee culture is wide-spread in Slovenia, and one can see Slovenes with friends sitting in the same cafÃ© for hours Tea Äaj is nowhere near as popular, and if they do drink it, Slovenes prefer all sorts of fruit-flavored and herbal teas over a basic black cup

Beer pivo is the most popular tipple and the main brands are LaÅ¡ko and Union Adam Ravbar beer is good quality and is usually hard to find anywhere except in their small brewery located in DomÅ¾ale, a town about 10 km north of Ljubljana A bottle or jug will cost you â¬250 in a pub pivnica Ask for veliko large for 05L and malo small for 03L

Despite what you might think if you've ever sampled an exported sickly sweet Riesling, Slovenian wine vino can be quite good — they keep the best stuff for themselves Generally, the GoriÅ¡ka brda region produces the best reds and the drier whites in a more Italian/French style, while the Å tajerska region produces the best semi-dry to sweet whites, which cater more to the German/Austrian-type of palate Other local specialities worth sampling are Teran, a very dry red from the Kras region, and CviÄek, a red so dry and light it's almost a rosé Wine is usually priced and ordered by the decilitre deci, pronounced "de-tsee", with a deci around one euro and a normal glass containing about two deci

A Slovene brandy known as Å¾ganje, not unlike the Hungarian palinka, can be distilled from almost any fruit Medeno Å¾ganje also known as medica has been sweetened with honey Vodka is, as in most of Slavic nations, also very popular, especially among youger generation

Slovenia has a wide variety of accommodation, ranging from five star hotels to secluded cottages in the mountains

There are hostels in all of the tourist destinations in Slovenia The average price for a basic bed in a dorm is â¬10-â¬20 euro Quite a few student dormitories dijaÅ¡ki dom are converted into hostels in the summer, but these tend to be poorly located and somewhat dingy

Mountain Huts can be found in Triglav National Park, and they are very warm, welcoming and friendly Information about these huts can be found at tourist information offices who will also help you plan your walks around the area and phone the hostels to book them for you The only way to get to the huts is by foot, and expect a fair bit of walking up hills, as the lowest huts are around 700m up There are clear signs/information around stating how long it will take to travel to/between all the huts indicated in hours

Camping is not permitted in the national parks of Slovenia, but there are various designated camping grounds It's advisable to take a camping mat of some sort, as nice, comfortable grass is a luxury at camp sites and you're much more likely to find pitches consisting of small stones

What do you think about Solomon Islands?