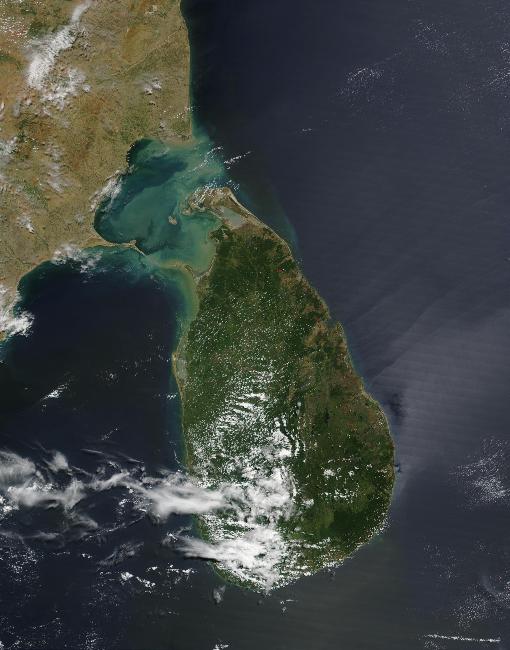 Sri Lanka has more than 2,500 years of continuous written history by means of the Mahawansha, and was also mentioned in several ancient Indian texts One of the most famous is the Ramayana, in which the island, which was referred to as Lanka, was the island fortress of the evil king Ravana, who captured the wife of Rama an incarnation of the Hindu God, Vishnu Legend has it that Hanuman the monkey flew over to Lanka and destroyed the capital by setting it on fire, while Rama and his remaining troops later crossed over from the mainland by building a land bridge across the sea Evidence for the existence of a land bridge has since been found by NASA satellite images

The Sinhalese arrived in Sri Lanka late in the 6th century BC, probably from northern India Buddhism was introduced beginning in about the mid-3rd century BC, and a great civilization developed at such cities as Anuradhapura kingdom from c200 BC to c1000 AD and Polonnaruwa c1070 to 1200 also they have two more kingdoms Kandian Kingdom and Jaffna Kingdom Then British came and connect all three kingdoms into one for the administrative purpose and left as one country in 1948

Occupied by the Portuguese in the 16th century and by the Dutch in the 17th century, the island was ceded to the British in 1796, and became a crown colony in 1802 As Ceylon, it became independent in 1948; the name was changed to Sri Lanka in 1972

Since Sri Lanka is a tropical country, you can expect the rain anytime of the year in most parts However, the two major rainy seasons are North-East monsoon October to January and South-West monsoon May to July

Being an island, the climate of Sri Lanka changes dramatically from one part of the country to another For example at Nuwara Eliya, in the hills of Central Province, has a temperature around 15-20 C throughout the year, whereas Hambanthota, located in the dry zone, has a temperature consistently around 30-35 C

Sinhala, spoken by the majority Sinhalese, and Tamil, spoken by the minority Tamil and Muslim groups, are Sri Lanka's two official languages English is commonly used in most cities, especially Colombo, Kandy and Galle, and by government and tourism officials Don't expect everyone, everywhere to be able to speak it fluently In the beach and tourist areas you will have no problem with English Most people in rural villages however cannot speak any English, beyond a few simple words

Sinhala writing is much more curved than Tamil After a while, you'll learn how to distinguish between the two

The currency is the Sri Lankan Rupee The exchange rates are approximately 115Rs/ USD, 159Rs/ EUR or 183Rs/GBP There are coins for 25 and 50 cents bronze, 1 rupee old version is big and silver, new version is small and gold, 2 rupees silver, and 5 rupees gold, as well as banknotes ranging from 10- 2000 rupees Coins that are more than a few years old are typically in quite bad condition

Handicrafts Of Sri Lanka For reed, cane, cotton, paper, leather, wood, clay, metal, and gemstones have been transformed and re-expressed in a array of batiks, toys, curios and jewelery, all exquisite hand made treasures

ATMs are located in many places specially at bank branches in the cities and suburbs, less so in the countryside Be careful of using credit cards, as fraud is on the rise in Sri Lanka You can withdraw from debit cards too Cirrus, Maestro, Visa Electron etc where the logos are displayed

Food and eating in Sri Lanka

Sri Lanka and South Indian food share a lot in common, and many local restaurants will describe their menus as Sri Lankan & South Indian There are a number of regional variations though, the different types of hopper, devilled prawns/cuttlefish/chicken/etc and the common fiery addition to any curry, pol sambol made of grated coconut, red chilli powder and lime juice

The food is very cheap generally, with a cheap meal costing about a dollar The most expensive, tourist-orientated places seldom charge more than ten dollars The staple food of Sri Lankans is rice and curry - a massive mound of rice surrounded by various curries and delicacies If you want to eat a cheap lunch you can follow the Sri Lankan crowds and duck into any of a million small cafes, confusingly called 'Hotels' These normally sell a rice and curry packet, as well as 'short eats', a collection of spicy rolls This is ideal for backpackers and those who want to get past the touristy hotels selling burnt chicken and chips - you're charged by how much you eat, and unless you're absolutely ravenous it probably won't cost over a dollar

Kottu Kothu Roti a medley of chopped roti, vegetables and your choice of meat is a must-have for anyone - tourist or otherwise - in Sri Lanka It is uniquely Sri Lankan and tastes best when made fresh by street vendors

Note that Sri Lankans eat with their right hands - this isn't a major problem, because everywhere will be able to provide cutlery if you can't eat otherwise But try the Sri Lankan way tips of fingers only!, it's harder than it looks but strangely liberating

There are many upscale restaurants to choose from in the city of Colombo There are several fine dining restaurants at the 5 star hotels which offer both Local and International cuisine These establishments are found largely in western Colombo along Galle Road, though more are located around Colombo and other major cities

Fast-food outlets such as KFC, Pizza Hut etc can be found in major cities

In Sri Lanka Water from the tap is not considered to be safe to drink in the country However if you are using bottled water please make sure SLSSri Lanka Standard Institute label is present Also in some parts of the country you'll find hard water due to the high presence of lime in the soil Fresh milk, due to the climate, spoils easily, and so is often very expensive Powdered milk, however, is safe and is often substituted

Thambili the juice from King Coconut, is very refreshing It's sold at the side of streets throughout the island, you know it's clean as the coconut is cut open in front of you and it's cheaper than bottled drinks at about R30/- each

The most common local beer is Lion Lager For something a bit different try Lion Stout It is characterized by it's tar-like oiliness of body and chocolate finish Other brews include Three Coins, which is brewed by the Mt Lavinia hotel chain, allegedly to a Belgian recipe

The traditional spirit is Arrack, which costs about 4 USD for a bottle, and is often drunk with ginger beer The quality can vary depending on how much you want to pay However, widely recommended brand would be "Old Reserve" and worth paying 75 USD for it

Accommodation in Sri Lanka has been transformed in recent years What would be recognized as the modern tourist industry began in the 1960s with traditional beach hotels built on the west coast which were aimed primarily at the package holiday crowd and traditional travel operators But the past decade has brought a major change, with the growth of villas, boutique hotels, and small independent and individualistic properties offering a huge array of choice

With the end of the separatist war in May 2009, tourist arrivals to this beautiful island nation have increased dramatically, so to be on the safer side you may consider making reservation early

Due to the large number of unemployed South Africans, there are limited work opportunities for foreigners in South Africa

Non South African citizens are only allowed to work in South Africa if they are in possession of a work permit Students in Canada can apply for a work visa through SWAP 40, although costs are high the service is helpful and well organized

The process of applying for a work permit is similar to applying for a study permit, contact a South African High Commission, Embassy, Consulate or Trade Mission in your country of origin, or in the nearest country, should there be no South African representation is available in your country Government form B1-159 A&C needs to be completed for the application Processing of the application will take 8 to 12 weeks

There are some skills that are in short supply in the country and the Department of Home Affairs has a Quota Work Permit program aimed at sourcing these skills from abroad A list of skills in demand and set quotas for each of those skills are published yearly Applicants with formal qualification and work experience in the required fields may apply for a quota work permit This permit costs around R1600 and applications will take between 6 to 8 weeks to process If the application is approved one will have a 90 day period from the time of entering the country to find employment in the field that the permit was issued for Once employed, the permit will stay valid as long as one is employed within the same field of work changing employers is allowed More information, as well as the skills and quotas list for the current year, can be found on the Department of Home Affairs homepage 41

What do you think about Sri Lanka?