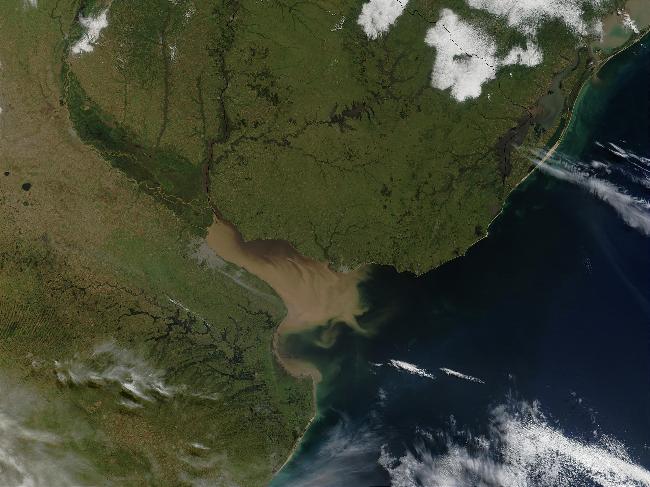 Montevideo, founded by the Spanish in 1726 as a military stronghold, soon took advantage of its natural harbor to become an important commercial center. Claimed by Argentina but annexed by Brazil in 1821, Uruguay declared its independence four years later and secured its freedom in 1828 after a three-year struggle. The administrations of President Jose BATLLE in the early 20th century launched widespread political, social, and economic reforms that established a statist tradition. A violent Marxist urban guerrilla movement named the Tupamaros, launched in the late 1960s, led Uruguay's president to cede control of the government to the military in 1973. By yearend, the rebels had been crushed, but the military continued to expand its hold over the government. Civilian rule was not restored until 1985. In 2004, the left-of-center Frente Amplio Coalition won national elections that effectively ended 170 years of political control previously held by the Colorado and Blanco parties. Uruguay's political and labor conditions are among the freest on the continent.

Uruguay has a free market economy characterized by an export-oriented agricultural sector, a well-educated work force, and high levels of social spending. Following financial difficulties in the late 1990s and early 2000s, economic growth for Uruguay averaged 8% annually during the period 2004-08. The 2008-09 global financial crisis put a brake on Uruguay's vigorous growth, which decelerated to 2.6% in 2009. Nevertheless, the country managed to avoid a recession and keep positive growth rates, mainly through higher public expenditure and investment, and GDP growth reached 8.9% in 2010 but slowed in 2012-13, the result of a renewed slowdown in the global economy and in Uruguay's main trade partners and Common Market of the South (Mercosur) counterparts, Argentina and Brazil. Uruguay has sought to expand trade within Mercosur and with non-Mercosur members. Uruguay's total merchandise trade with Mercosur since 2006 has increased by nearly 70% to more than $5 billion while its total trade with the world has almost doubled to roughly $23 billion in 2013.

in 2010, the ICJ ruled in favor of Uruguay's operation of two paper mills on the Uruguay River, which forms the border with Argentina; the two countries formed a joint pollution monitoring regime; uncontested boundary dispute between Brazil and Uruguay over Braziliera/Brasiliera Island in the Quarai/Cuareim River leaves the tripoint with Argentina in question; smuggling of firearms and narcotics continues to be an issue along the Uruguay-Brazil border Trafficking in persons: current situation: Uruguay is a source country for women and children subjected to sex trafficking and, to a lesser extent, a destination country for men, women, and children exploited in forced labor; most victims are women and girls exploited in sex trafficking; some Uruguayan women lured by fraudulent employment offers in Spain, Italy, and Argentina are forced into prostitution; foreign workers in domestic service and agriculture are vulnerable to forced labor in Uruguay; some human trafficking cases are reportedly linked to crime rings tier rating: Tier 2 Watch List - Uruguay does not fully comply with the minimum standards for the elimination of trafficking; however, it is making significant efforts to do so; the government investigated and prosecuted several trafficking cases during 2012 but reported no convictions; authorities have increased funding and staffing for the national women's institute unit that is focused on sex trafficking and domestic violence, but specialized services remain inadequate and victim care services outside the capital are uneven; officials lack formal procedures for identifying trafficking victims (2013) Illicit drugs: small-scale transit country for drugs mainly bound for Europe, often through sea-borne containers; law enforcement corruption; money laundering because of strict banking secrecy laws; weak border control along Brazilian frontier; increasing consumption of cocaine base and synthetic drugs

What do you think about Uruguay?

How expensive is Uruguay?
(1 UYU = 0 USD)
TripAround.org, your travel companion