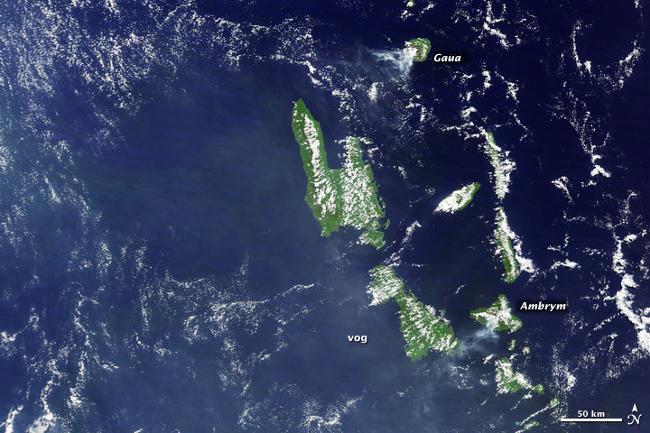 Multiple waves of colonizers, each speaking a distinct language, migrated to the New Hebrides in the millennia preceding European exploration in the 18th century. This settlement pattern accounts for the complex linguistic diversity found on the archipelago to this day. The British and French, who settled the New Hebrides in the 19th century, agreed in 1906 to an Anglo-French Condominium, which administered the islands until independence in 1980, when the new name of Vanuatu was adopted.

This South Pacific island economy is based primarily on small-scale agriculture, which provides a living for about two-thirds of the population. Fishing, offshore financial services, and tourism, with nearly 197,000 visitors in 2008, are other mainstays of the economy. Mineral deposits are negligible; the country has no known petroleum deposits. A small light industry sector caters to the local market. Tax revenues come mainly from import duties. Economic development is hindered by dependence on relatively few commodity exports, vulnerability to natural disasters, and long distances from main markets and between constituent islands. In response to foreign concerns, the government has promised to tighten regulation of its offshore financial center. In mid-2002, the government stepped up efforts to boost tourism through improved air connections, resort development, and cruise ship facilities. Agriculture, especially livestock farming, is a second target for growth. Australia and New Zealand are the main suppliers of tourists and foreign aid.

What do you think about Vanuatu?

How expensive is Vanuatu?
(1 VUV = 0 USD)
TripAround.org, your travel companion