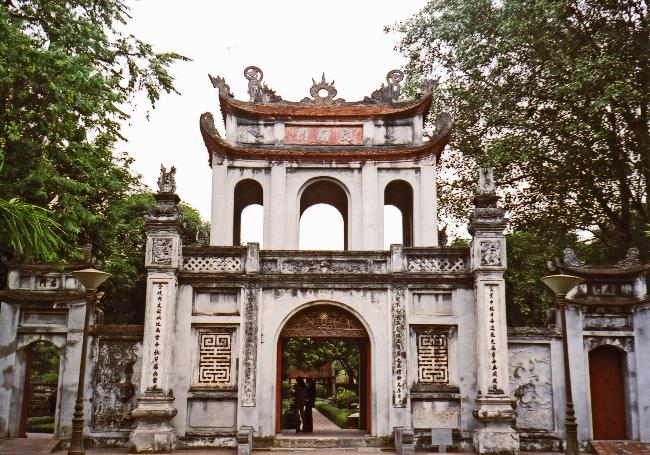 The conquest of Vietnam by France began in 1858 and was completed by 1884. It became part of French Indochina in 1887. Vietnam declared independence after World War II, but France continued to rule until its 1954 defeat by communist forces under Ho Chi MINH. Under the Geneva Accords of 1954, Vietnam was divided into the communist North and anti-communist South. US economic and military aid to South Vietnam grew through the 1960s in an attempt to bolster the government, but US armed forces were withdrawn following a cease-fire agreement in 1973. Two years later, North Vietnamese forces overran the South reuniting the country under communist rule. Despite the return of peace, for over a decade the country experienced little economic growth because of conservative leadership policies, the persecution and mass exodus of individuals - many of them successful South Vietnamese merchants - and growing international isolation. However, since the enactment of Vietnam's "doi moi" (renovation) policy in 1986, Vietnamese authorities have committed to increased economic liberalization and enacted structural reforms needed to modernize the economy and to produce more competitive, export-driven industries. The communist leaders, however, maintain control on political expression and have resisted outside calls to improve human rights. The country continues to experience small-scale protests from various groups - the vast majority connected to land-use issues, calls for increased political space, and the lack of equitable mechanisms for resolving disputes. Various ethnic minorities, such as the Montagnards of the Central Highlands and the Khmer Krom in the southern delta region, have also held protests.

Vietnam is a densely-populated developing country that has been transitioning from the rigidities of a centrally-planned economy since 1986. Vietnamese authorities have reaffirmed their commitment to economic modernization in recent years. Vietnam joined the World Trade Organization in January 2007, which has promoted more competitive, export-driven industries. Vietnam became an official negotiating partner in the Trans-Pacific Partnership trade agreement in 2010. Agriculture's share of economic output has continued to shrink from about 25% in 2000 to less than 20% in 2013, while industry's share increased from 36% to more than 42% in the same period. State-owned enterprises account for about 40% of GDP. Poverty has declined significantly, and Vietnam is working to create jobs to meet the challenge of a labor force that is growing by more than one million people every year. The global recession hurt Vietnam's export-oriented economy, with GDP in 2013 growing at 5%, the slowest rate of growth since 1999. In 2013, however, exports increased by more than 12%, year-on-year; several administrative actions brought the trade deficit back into balance. Between 2008 and 2011, Vietnam's managed currency, the dong, was devalued in excess of 20%, but its value remained relatively stable in 2013. Hanoi has oscillated between promoting growth and emphasizing macroeconomic stability in recent years. In February 2011, the government shifted from policies aimed at achieving a high rate of economic growth, which had stoked inflation, to those aimed at stabilizing the economy, through tighter monetary and fiscal control. Although Vietnam unveiled a broad, "three pillar" economic reform program in early 2012, proposing the restructuring of public investment, state-owned enterprises, and the banking sector, little perceptible progress has been made. Vietnam's economy continues to face challenges from an undercapitalized banking sector. Non-performing loans weigh heavily on banks and businesses.

southeast Asian states have enhanced border surveillance to check the spread of avian flu; Cambodia and Laos protest Vietnamese squatters and armed encroachments along border; Cambodia accuses Vietnam of a wide variety of illicit cross-border activities; progress on a joint development area with Cambodia is hampered by an unresolved dispute over sovereignty of offshore islands; an estimated 300,000 Vietnamese refugees reside in China; establishment of a maritime boundary with Cambodia is hampered by unresolved dispute over the sovereignty of offshore islands; the decade-long demarcation of the China-Vietnam land boundary was completed in 2009; China occupies the Paracel Islands also claimed by Vietnam and Taiwan; Brunei claims a maritime boundary extending beyond as far as a median with Vietnam, thus asserting an implicit claim to Lousia Reef; the 2002 "Declaration on the Conduct of Parties in the South China Sea" has eased tensions but falls short of a legally binding "code of conduct" desired by several of the disputants; Vietnam continues to expand construction of facilities in the Spratly Islands; in March 2005, the national oil companies of China, the Philippines, and Vietnam signed a joint accord to conduct marine seismic activities in the Spratly Islands; Economic Exclusion Zone negotiations with Indonesia are ongoing, and the two countries in Fall 2011 agreed to work together to reduce illegal fishing along their maritime boundary Refugees and internally displaced persons: stateless persons: 11,500 (2012); note - Vietnam's stateless ethnic Chinese Cambodian population dates to the 1970s when thousands of Cambodians fled to Vietnam to escape the Khmer Rouge and were no longer recognized as Cambodian citizens; Vietnamese women who gave up their citizenship to marry foreign men have found themselves stateless after divorcing and returning home to Vietnam; the government addressed this problem in 2009, and Vietnamese women are beginning to reclaim their citizenship Illicit drugs: minor producer of opium poppy; probable minor transit point for Southeast Asian heroin; government continues to face domestic opium/heroin/methamphetamine addiction problems despite longstanding crackdowns

What do you think about Vietnam?

How expensive is Vietnam?
(1 VND = 0 USD)
TripAround.org, your travel companion