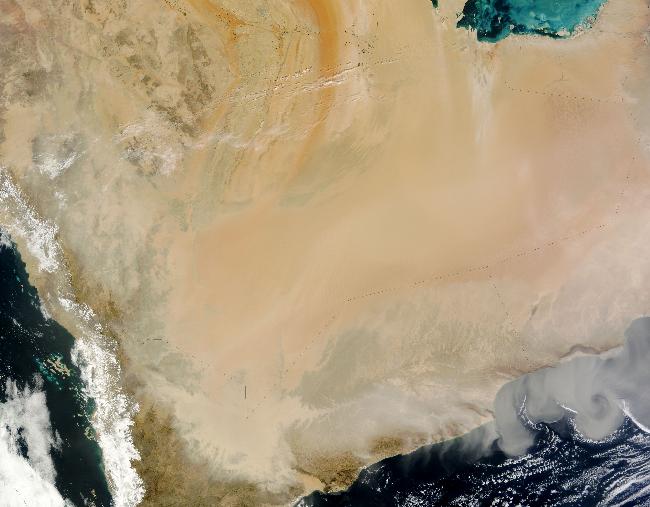 North Yemen became independent of the Ottoman Empire in 1918. The British, who had set up a protectorate area around the southern port of Aden in the 19th century, withdrew in 1967 from what became South Yemen. Three years later, the southern government adopted a Marxist orientation. The massive exodus of hundreds of thousands of Yemenis from the south to the north contributed to two decades of hostility between the states. The two countries were formally unified as the Republic of Yemen in 1990. A southern secessionist movement and brief civil war in 1994 was quickly subdued. In 2000, Saudi Arabia and Yemen agreed to a delimitation of their border. Fighting in the northwest between the government and the Huthis, a Zaydi Shia minority, began in 2004 and has since resulted in six rounds of fighting - the last ended in early 2010 with a cease-fire that continues to hold. The southern secessionist movement was revitalized in 2008 when a popular socioeconomic protest movement initiated the prior year took on political goals including secession. Public rallies in Sana'a against then President SALIH - inspired by similar demonstrations in Tunisia and Egypt - slowly built momentum starting in late January 2011 fueled by complaints over high unemployment, poor economic conditions, and corruption. By the following month, some protests had resulted in violence, and the demonstrations had spread to other major cities. By March the opposition had hardened its demands and was unifying behind calls for SALIH's immediate ouster, and prominent military and tribal leaders began defecting from SALIH's camp. The Gulf Cooperation Council (GCC) in late April 2011, in an attempt to mediate the crisis in Yemen, proposed an agreement in which the president would step down in exchange for immunity from prosecution. SALIH's refusal to sign an agreement led to heavy street fighting and his injury in an explosion in June 2011. The UN Security Council passed Resolution 2014 in October 2011 calling on both sides to end the violence and complete a power transfer deal. In late November 2011, SALIH signed the GCC-brokered agreement to step down and to transfer some of his powers to Vice President Abd Rabuh Mansur HADI. Following elections in February 2012, won by HADI, SALIH formally transferred his powers. In accordance with the GCC initiative, Yemen launched a National Dialogue in March 2013 to discuss key constitutional, political, and social issues. HADI concluded the National Dialogue in January 2014. Subsequent steps in the transition process include constitutional drafting, a constitutional referendum, and national elections.

Yemen is a low income country that is highly dependent on declining oil resources for revenue. Petroleum accounts for roughly 25% of GDP and 63% of government revenue. Yemen has tried to counter the effects of its declining oil resources and continuing attacks on its oil pipelines by diversifying its economy through an economic reform program initiated in 2006 that is designed to bolster non-oil sectors of the economy and foreign investment. In October 2009, Yemen exported its first liquefied natural gas as part of this diversification effort. In January 2010, the international community established the Friends of Yemen group that aims to support Yemen's efforts toward economic and political reform. In 2012, the Friends of Yemen pledged nearly $7 billion in assistance to Yemen. The Yemeni Government also endorsed a Mutual Accountability Framework to facilitate the efficient implementation of donor aid. The unrest that began in early 2011 caused GDP to plunge almost 11% in 2011. Availability of basic services, including electricity, water, and fuel, has improved since the transition, but progress toward achieving more sustainable economic stability has been slow and uneven. Yemen continues to face difficult long-term challenges, including declining water resources, high unemployment, severe food scarcity, and a high population growth rate.

Saudi Arabia has reinforced its concrete-filled security barrier along sections of the fully demarcated border with Yemen to stem illegal cross-border activities Refugees and internally displaced persons: refugees (country of origin): 5,740 (Ethiopia) (2013); 233,723 (Somalia) (2014) IDPs: 309,823 (conflict in Sa'ada governorate; clashes between AQAP and government forces) (2014) Trafficking in persons: current situation: Yemen is a source and, to a much lesser extent, transit and destination country for men, women, and children subjected to forced labor and sex trafficking; some Yemeni children, mostly boys, migrate to Yemeni cities or across the border to Saudi Arabia and, less frequently Oman, where they end up as forced laborers in domestic service or small shops, beggars, or prostitutes; some of the large number of child workers in Yemen also face conditions of forced labor; other Yemeni children are conscripted into the government's armed forces or tribal or rebel militias; to a lesser degree, Yemen is a country of origin for girls trafficked within country or to Saudi Arabia to work as prostitutes in hotels and clubs; additionally, Yemen is a destination and transit country for women and children from the Horn of Africa who are looking for work or have received false job offers in the Gulf states but are subjected to sexual exploitation or forced labor upon arrival; reports indicate that adults and children are still sold or inherited as slaves in Yemen tier rating: Tier 3 - Yemen does not fully comply with the minimum standards for the elimination of trafficking and is not making significant efforts to do so; prolonged political, economic, and security crises impeded the government's modest anti-trafficking efforts; the government has not instituted formal procedures to identify and protect victims of trafficking or investigate or prosecute officials complicit in trafficking-related crimes; no known efforts have been made to investigate or punish the practice of chattel slavery; the government has taken some steps to prevent the recruitment of children in the armed forces, but it is unclear if efforts have been made to remove child soldiers from the military and provide them with protective or rehabilitative services; no progress has been made in implementing Yemen's 2008 national action plan on trafficking (2013)

What do you think about Yemen?

How expensive is Yemen?